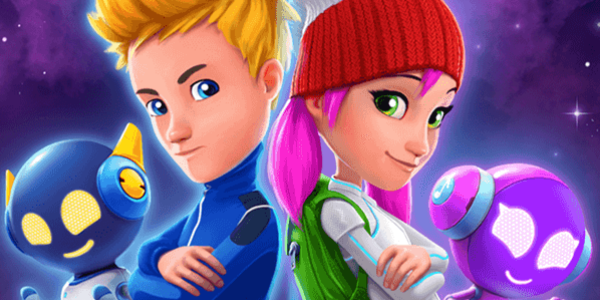 Fans of marble poppers will find plenty of opponents to test their skills against.

When Mars Pop ended up on my radar, I’ll admit that I was a bit skeptical.  While puzzle games are definitely a preferred genre of mine, my attempts to become skilled at the first marble popper game that I played, Bust-a-Move, ended in failure, frustration, and a few broken controllers.  With that in mind, I put a shatterproof case on my phone and delved right in to Mars Pop; and while all my frustrations with my ineptitude when it comes to marble poppers remained intact, Mars Pop definitely softened that blow with a slick presentation, an easy to use interface, and a live multiplayer aspect that makes rounds social as well as fiercely competitive.  Players choose one of two avatars, each with a cutesy gender matched sidekick, and a small collection of different animations, all of which are surprisingly fluid. 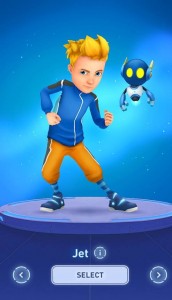 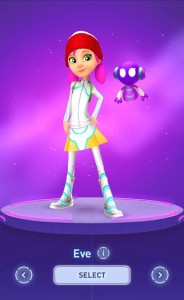 After you select the “Play” option the game matches you up with a random opponent from anywhere in the world.  The game itself is a standard marble popper where you are given a randomized assortment of different color bubbles that you then shoot at a row of bubbles at the top of the screen.  As usual, you need to match more than three of the same color in order to get a pop, which will clear those bubbles off the screen and provide points.  In this case though, instead of providing points, popping bubbles drops another row on to your opponent’s screen and vice versa.  There are some curveballs, such as bombs that clear out a large area of bubbles if you hit them, and colorless bubbles that act as the color of the most bubbles attached to them.  Since both players are given the same b 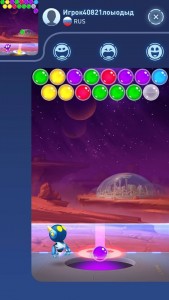 ubbles in the same order there’s no inequality; so despite not being able to filter between skill levels for opponents, you’re never made to feel like you’re at a disadvantage.  What really sets the game apart though is the “Chat” option that doesn’t allow you to enter your own commands, but has a preset list of various emotes and phrases that ensures that you can communicate with opponents despite language barriers.  This adds a friendly aspect to the games, and makes it social enough to keep your frustration from overwhelming your fun.

Unfortunately since the game is free there are the odd pop-up ads that break up the experience, and while there are no “pay walls” there is an energy system that gives back one energy every 15 minutes, but this is offset by a level-up system that increases your energy, encouraging you to win more games in order to gain more energy.  The team at Outfit 7 Limited also give you an option to to skip over the 15 minute wait by watching a thirty second ad, however this is only available a couple of times a day.

Final Word: Ads, pay options, and waiting for energy drags Mars Pop down a bit.  However, when you’re dealing with an addictive genre like marble poppers, I’d argue that it’s better to force a cooldown period.  If you’re the type who sneezes money and can’t stand to wait though, the option to jump the line is available to you.  Personally, I enjoyed being able to replenish my energy with a brief 15-30 second ad.  Mars Pop is free though, and free is a good price.  It’s fun, fast, addictive, and social.  But with a literal whole world of opponents out there, you’ll find that sometimes you’ll do really well,, and other times when you’ll be absolutely crushed.  Both of which will encourage you to to step up your 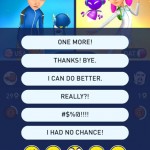 game and start thinking with a bit more strategy.  Despite not being a fan of the genre, I found myself saving large matches until the last moment to get the full effect, and taking chances by bouncing off of the sides in order to reach otherwise unreachable matches.  Sometimes it worked out and sometimes it didn’t, but I never felt like taking a chance to pull off a bold move was not worth it.  With a new practice mode that allows you to hone your techniques, a worldwide leaderboard to test your mettle, and the ability to play with your friends via Facebook, Mars Pop might just be the most accessible marble popper game out there.  If you’re a fan of the genre, I’d say you’d do well to give this one a shot, and if you’ve never heard of marble poppers or tried one, this would be a great place to start.  It’s deceptively simple and addictive, but the ability to play live with people in other countries without a language barrier creates a social aspect to the game that’s incredibly unique, and surprisingly rewarding.

Mars Pop is the latest project from Outfit7 Limited, and despite being their first foray in to the genre, it’s incredibly solid.  It’s available for no charge, cross-platform, on iOS, Android, and Microsoft devices.