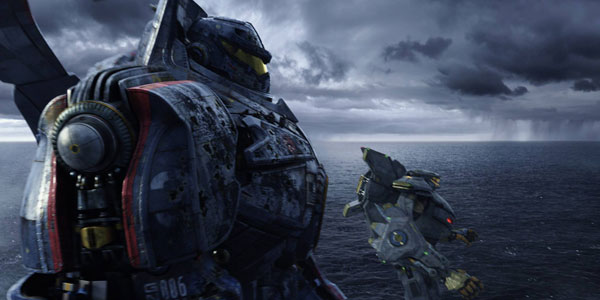 Guillermo Del Toro goes bigger than ever with his mechs versus kaiju epic, and the result is the best blockbuster movie of the summer.

Pacific Rim is a smashing success in a number of ways.  As an homage to giant monster movies, anime and spectacle cinema it stands among the best tributes.  As a classic adventure story, filled with straightforward good people doing good work, it wins.  As a Guillermo Del Toro film, with humanity infused in every immersive frame of fantasy, it succeeds as one of his finest.  And as a big-budget summer movie, Pacific Rim has the perfect balance of strong filmmaking, smart storytelling and an electrical sense of awe to make it feel like an instant classic.

Like the characters of the movie itself, Pacific Rim excels at each one of these aspects, but it all comes together to form a thoroughly satisfying and completely entertaining whole.  The story is fairly simple, past the wonderfully concise world building prologue which occupies the film’s first 15 minutes– a rift in the bottom of the Pacific Ocean was opened a portal through which impossibly colossal, deadly monsters– called kaiju– emerge to wreak havoc on our world.  When standard weapons prove useless to face the kaiju, humanity decides to stand up to the beasts as one, forming the Pan Pacific Defense Corps, an international organization that constructs giant mechs, the Jaegers, to combat the kaiju and hold them at bay.

Each Jaeger is controlled by two pilots (like the right and left hemispheres of the brain), and the duo connects their minds, thoughts and memories through a process called “The Drift,” allowing them to function as one to control their giant robotic warriors.  The PPDC’s plan worked for nearly a decade, keeping the kaiju at bay… but over time the monsters adapted and became a more frequent and hostile threat, and the Jaegers couldn’t be made fast enough to keep up.. The plan failed, and nations began building giant walls in a different attempt to defend themselves against the giant invaders, surrendering the oceans to the kaiju.  The PPDC, once the world’s primary defenders, are now a shambling resistance force, banking on one last plan with their remaining Jaegers to stop the kaiju threat once and for all.

That’s literally all the origin we get, or need.  Pacific Rim masterfully avoids the tropes that have become synonymous with blockbusters– aside from this intro, this is not at all an origin story.  It’s also very much not a modern deconstructionist type hero story– the good guys here, lead by ex-Jaeger pilot Raleigh Beckett (Charlie Hunnam) are by no means accidental, vengeful or reluctant heroes… they are an incredibly capable bunch of people doing what they do because it has to be done.  There’s an old school, square jawed approach to the heroics of the PPDC that harkens back to the golden age of pulp sci fi, and it’s such an uncommon occurrence in today’s post-Dark Knight blockbusters that it feels like a breath of fresh air.

Hunnam is alright as the lead character, and he’s certainly fitting of the lead role in a sci fi epic that harkens back to similar straight-man heroes like Luke Skywalker and Keith from Voltron.  Despite losing his brother (and co-pilot) to a kaiju attack, he’s not back in the monster fighting business for revenge… in fact, the vengeful feelings he and his new partner Mako Mori both hold are the first crutches they have to lose before they can step up and take control of their massive mech, Gipsy Danger.

These two leads offer a solid anchor for the story, although they are often overshadowed by the fantastic supporting cast.  Best among them is Idris Elba’s Marshal Stacker Pentecost, the commanding officer of PPDC, who creates the likely-suicide mission that is the focus of the story.  Elba brings a wonderful humanity to the military leader, and he can convey his resolve, his anger and his strange vulnerability with little more than his eyes.  While the increasing Drift connection between Raleigh and Mako remains Pacific Rim’s main focus, the quietly revealed history between Mako and Pentecost is the strongest relationship in the entire movie.

Raleigh’s return ruffles the feathers for hot shot Australian pilot Chuck Hansen, who pilots Jaeger Striker Eureka with his father Herc.  The duo, complete with their pet bulldog, are set up to seem like the elitist jerks of the team– especially as Chuck confront Raleigh claiming he’s the type of pilot that ruined the Jaeger program– but in sticking with the classic vibe of the movie, Chuck is still a brave and dutiful hero, even at his most dickish.

Even smaller characters, like Clifton Collins’ Jaeger ops specialist Tendo Choi, and the pilot teams of the Australian, Chinese and Russian Jaegers, are each a sight to behold– Choi’s absurd pompadour and perpetual bowtie are straight out of an anime character design, as are the platinum blonde Russians and the trio of Chinese pilots in their matching red gymnastics suits.  We sadly don’t get too much time with any of these people, but they all leave such an impression as to leave you wanting much, much more.

Rounding out the cast are Charlie Day’s scientist Newt Geiszler, whose kaiju fandom makes him seem like the obvious audience surrogate for Del Toro himself, if not all of us, who gets his own great arc as he attempts to understand the kaiju using Drift technology to connect with them.  His mission takes him to one of the film’s most iconic of sets, Hong Kong’s “Bone Slums,” a location so dense and rich in its fantastic detail I would watch an entire movie set in it.  It’s there he meets black market kaiju parts dealer Hannibal Chau (Ron Perlman), who steals the show with his outrageous mannerisms and general weirdness.

Each of these players stays occupied as the Jaegers are deployed to protect Hong Kong against two of the deadliest kaiju ever to emerge, before taking the fight to the portal to the monsters’ home dimension in the thrilling finale.  It seems almost pointless to even spend time talking about the creature design and the thrilling scenes of robot and monster combat– they are beyond amazing, truly next level stuff in regards to both design and action filmmaking.

There are a number of astonishingly huge scale Jaeger/ Kaiju fights throughout the movie, and each has its own unique look and feel.  Many also relate closely back to the characters, from the high stakes monster pursuit that Mako survived as a small child, to Gipsy Danger’s eleventh hour day-saver in Hong Kong, which will go down as one of the all time best fight sequences in the history of film… one whose scope is impossibly far-reaching, but whose impact is very much felt in each frame.  The final battle, at the bottom of the ocean at the source of the dimensional rift, is equally captivating, and leads to a highly satisfying finale that had me literally cheering out loud.

Just like the battle sequences, each Jaeger and Kaiju is unique and amazing to behold.  The giants feature very classic designs, with distinct body shapes and their own personalities.  They are anatomically sound, and instantly memorable– another truly refreshing change of pace from the typical overly busy, questionable designs of modern movie creatures.  It’s not easy to pick a favorite Jaeger or kaiju, because they all look so cool… but I’m pretty sure everyone will be walking away with some personal favorites by the end of the movie.

But the biggest victory of Pacific Rim, more so than the refreshingly open and heartfelt approach to heroics… more than the astonishing battle sequences and amazing character designs… is the expansiveness of this world Del Toro and screenwriter Travis Beacham have developed.  This is a movie the creators hope will do to the next generation of fans, what the original Star Wars did for us– light a fire in their imaginations.  And if there’s any justice, Pacific Rim will do just that… I can say it awakened that same sense of pure wonder and excitement in me, as the first  time I laid eyes on the Cantina on Tatooine.  There’s environments and atmospheres just that original and full of wonder all over Pacific Rim, offering new places I’d like to live in for a much longer amount of time.

The central theme of Pacific Rim is about overcoming our differences and working together to achieve an impossible goal.  It makes for a thrilling sci fi adventure on screen, at a magnitude rarely seen even in this age of CGI fests each week.  But that idea of coming together works for the themes of this movie’s creators, as well– Guillermo Del Toro makes sure to wear his references– AND his heart– proudly on his sleeve.  It’s obvious in every wondrous frame, in every thrilling action sequence, each moment we spend with our heroes, and every tiny detail that fleshes out this amazing world he’s created.

I cannot imagine a more perfectly realized summer blockbuster, or one more worthy of earning a kaiju-sized audience.  Pacific Rim is thrilling, bold in its scale and confident in its tone… and it’s the most entertaining movie to hit theaters this year.  Pacific Rim is the new blockbuster king of the summer… and it’s an instant classic I cannot wait to revisit again and again. 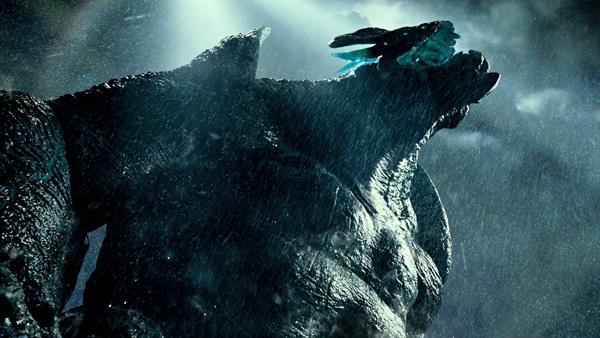