Paranautical Activity Challenges Gamers on the Xbox One 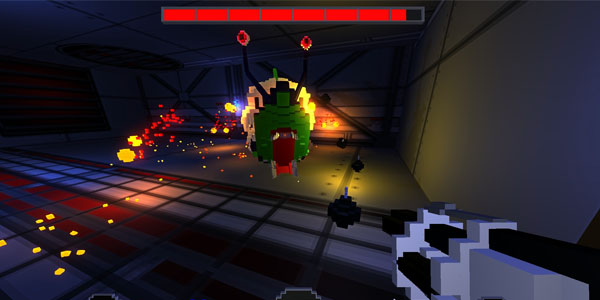 No story, No tutorial, No explanation, No Checkpoints, No mercy.

“Paranautical Activity” is a game. If you are watching the screen while “Paranautical Activity” is in session, you’ll be thoroughly convinced that it is a game. Now look at the person playing the game. Look in to their cold dead eyes, and feel the pain of being in this game’s thrall. Feel it, and know true suffering. Like any rogue-like game, “Paranautical Activity” expects you to be able to let go of everything that you’ve worked for. No save points or checkpoints. You lose, and you go right back to the beginning. No exceptions. This adds a layer of challenge, but you have to wonder if it was necessary due to the already punishing gameplay. 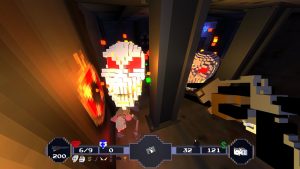 The game is a first person shooter on the surface, in the tradition of Doom and Quake, with a Minecraftlike aesthetic. The mechanics are very basic, with a simple five button interface (Jump, Attack, Use Bomb, Use Item, and Switch Weapon). You start with a total of 4 characters, with 2 more available to unlock. Each character has a weapon set unique to that character as well as varying levels of health and money, starting out. Weapons do different levels of damage, and some have unique firing styles (the crossbow needs to be held down to fire, the grenade launcher takes time to detonate, etc.) Some are effective, and some are as useful as wet paper towels. The game starts with Classic mode, which is much like the survival mode of other games but only if those games had been jacked up on cocaine and sent screaming down the freeway. In this mode you’ll fight through 8 floors housing over 40 different enemies of varying abilities, strength, and tactics; ranging from the standard (Ninjas, Demons, Mages) to the absolutely insane (Rocket turreted flying tortoises, land sharks, giant moths); all of which requiring different tactics as well. Each floor houses a different boss, along with the same sliding scale of standard to bonkers that the regular enemies fall under; from the quantifiable, like flying whales and jellyfish to the nightmare fuel of a giant skull that vomits spiders (Because I wasn’t planning on sleeping ever again.) The variety on these bosses is on the low side, but uncertainty of each bosses’ appearance does add yet another layer of challenge to “Paranautical Activity.” 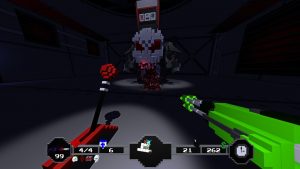 Challenge is “Paranautical Activity’s” strongest and weakest asset at the same time. The game’s easy start style, smooth framerate, and randomly generated environments and enemy spawns will undoubtedly appease the most masochistic of players, (and if not, after a couple of minutes that “dubstep soundtrack” will surely make them want to put their heads right through the drywall), but some of the difficulty can also be chocked up to poor design choices. All bombs, even their own, damages the player. When a lot of enemies rush you, and your character’s weapon is a grenade launcher it’s downright disconcerting to be forced to die by your own hand; especially when the penalty for death is so high. There’s also a damage stacking problem, where enemies can do multiple points of damage to you consecutively, and when there’s no cover system, any corridors to bottleneck foes, or even a momentary invulnerability after each hit, every room is a killbox with you in the center. This ambush system works in games like Binding of Isaac which employs an isometric viewpoint to give the player a better all around view to move around the play field strategically, but here it plays more like a first person bullet hell. An enemy will always sneak up while the player is focused on another mob, and chew through three health segments before receiving so much as an unkind look. Unlocks offset this challenge to a degree, but not to an extent that could give the player a noticeable enough advantage against the massive stack of advantages the enemies have by default. 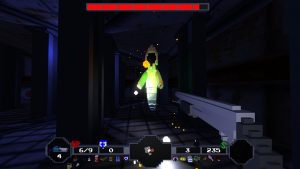 Still, I guess I’m a sucker for punishment or I just don’t know when to quit, because I am still playing “Paranautical Activity.” The game haunts my dreams. I still don’t know if it’s crazy hard on accident or if it is purposely challenging me to surpass my own limitations. The game may be easy to jump back in to, but it’s harder to get out of. There’s no back button on the character select screen to take you back to the main menu. Also, whenever you get to the game over screen, the only option available to you is Rematch; putting you in the awkward position of restarting the game and then quitting just to get back to the main menu. Design oversights like this reveal that despite “Paranautical Activity’s” attempts to seem just challenging, it lacks polish. I want to root for the underdog here, but it’s hard to when some of the “gameplay features” are really just design oversights.

“Paranautical Activity” is hard as hell. Hardcores will accept the challenge openly as it’s roll against loaded dice. More casual players will be a combination of frustrated, exhausted, and downright livid. Now if you’ll excuse me, there’s a giant snail with a massive skull for a shell that I owe a dance.