Is Paul Giamatti Going To Play The Rhino In Spider-Man 2? 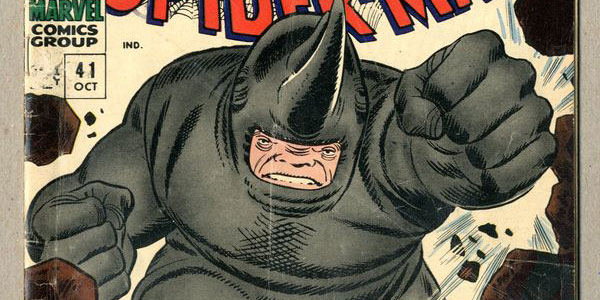 When I think of Paul Giamatti, the Rhino is probably the farthest comic book character from my mind.  The big, dumb bad guy has been squaring off with Spidey since the 60’s, and is best known for the hide-like super suit he’s trapped in, and the rhino horn on his head, which he uses as a battering ram.  The beefy, lunk-headed thug doesn’t share too many traits with Giamatti, but it turns out the actor has been keen to play this villain for a few years now.

In early 2011, the actor was quoted by ShowbizSpy saying “I thought Rhino was the greatest thing when I was a little kid… I always thought, ‘Why don’t they have The Rhino in one of their movies,’ but maybe The Rhino wasn’t that big of a deal for anybody but me… If they ever go with The Rhino I would be ready and waiting.”

And now, THR is reporting that Giamatti may have his chance, as he’s in talks to bring the powerhouse goon to life on the big screen, alongside Jamie Foxx’s Electro and Felicity Jones, who’s also in talks for an undisclosed role.

This casting seems baffling at first, but the more I think about it, the more interesting it becomes.  Giamatti is clearly a huge fan of the character, so that’s a win to begin with.  And Rhino, like Electro, is kind of a blank slate– there’s not much to his character, so that leaves plenty of room to develop him into something new.  It’s the same approach the production seems to be taking for Electro, adding the spurned fanboy/ sidekick angle, and we saw them apply the same sort of thing to The Lizard… although they kind of squandered that by turning his character into a big, scaly Magneto ripoff.

If this is true, I’d bet my bottom web shooter Rhino will be a CGI creation, so that offsets Giamatti’s smaller physique.  He’s known for playing angry, and a good enough actor that he can probably nail playing dumb, too.  If this is true, the biggest question will be how they’re planning to fit all of this into a single movie– we’ll have Gwen, Mary Jane, Electro, Rhino, and Harry Osbourne all confirmed, and likely some presence for Norman Osbourne as well… Hell, we might even learn who that guy was who came to visit Curt Connors in prison!  So this Spidey sequel will have a lot of plates to spin, that much is obvious.  How they’ll make out?  That remains to be seen.