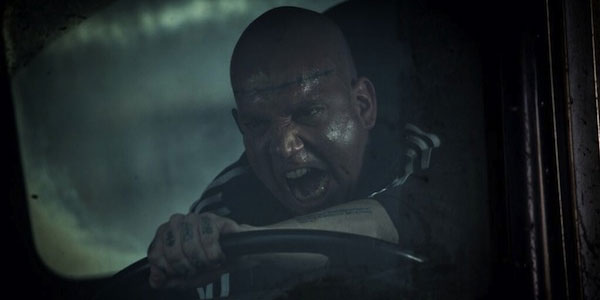 Amazing Spider-Man 2‘s Rhino has been revealed… and there’s a LOT of him to see!

Marc Webb posted our first official look at The Rhino, as played by Paul Giamatti in the upcoming Amazing Spider-Man 2, and since then we’ve been treated to plenty of shots of the actor all thugged and tattoo’ed out on set for the film.

Fan-Girl.org posted a spy report with lots of pictures of Giamatti facing off against Spider-Man… after the hero pantses him!  The webbing will clearly be added digitally in post production, but it’s obvious The Rhino is all bound up before Peter drops his pants on him.  I love the rhino-printed boxers– but I’m curious if Giamatti’s take on the character will just be a nickname for his street tough persona, or if he’ll get the comic book style armored suit at some point?

Either way, I dig the look they went with for the villain, and the pantsing scene just screams classic smart-ass Peter Parker to me.  The best parts of the mediocre first movie were Pete’s very welcome quips in costume, and I’m hoping for more of that in the sequel.  It looks like Webb and his team learned from their mistakes, and are really trying to get it right in the sequel– the cast is stellar, the looks are great and if they can keep nailing this fun, yet dangerous vibe to the story, we may be in for the first great Spidey movie since Spider-Man 2.