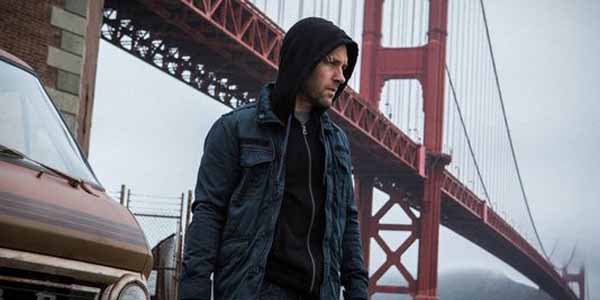 After the first day of filming earlier this week, Marvel released the first on-set image of Paul Rudd as Scott Lang, the criminal who will become the super hero Ant-Man.  We don’t get too much in the first picture, just Rudd clad in a dark hoodie, looking dangerous (by Paul Rudd standards, anyway), standing in front of the Golden Gate Bridge.

USA Today debuted the picture, which also had this blurb:

In Ant-Man, Lang is an ex-con and thief who finds a mentor in Dr. Hank Pym (Michael Douglas), a genius scientist and inventor of a technology that allows a man to shrink to the size of an insect but also increase his strength.

Powerful forces — including Pym’s star employee, Darren Cross (Corey Stoll), aka Yellowjacket — want the secret to the breakthroughs for their own nefarious uses. So Pym passes the mantle — and helmeted super-suit — of Ant-Man to Lang, and the two plan an ambitious heist that, if successful, will save the world.

Most of this, we already knew,.. but this is the first time I’ve heard that Pym himself is involved in the heist that most likely serves as the film’s main plot line.  It makes sense to have Michael Douglas Bruce Wayne-ing it in a Batman Beyond capacity, but I had assumed Lang would pull a fast one on his mentor and steal the suit on his own, like in the comics.  I kind of like Marvel Studios’ idea better.