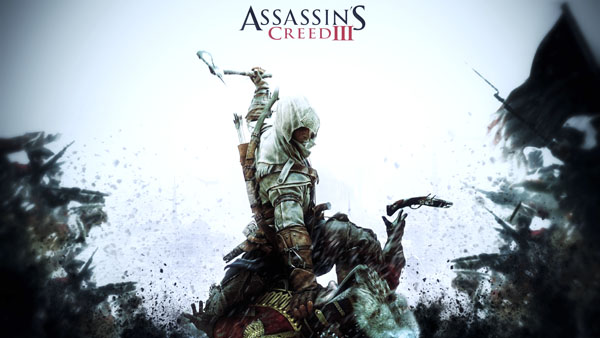 The sight of droves of PAX East attendees carrying around inflatable tomahawks could only mean one thing– Assassin’s Creed III had arrived. Ubisoft had an enormous black booth set up for the game with nothing on the outside but the crest of the Assassin Order and the roman numerals “III”. Inside the booth was a gameplay video that showed off many new aspects of the title that players can look forward to.  Even though it’s still a work in progress, the gameplay looked incredibly polished and it seems like Ubisoft Montreal are making some serious changes for the better.

Finally leaving Renaissance-era Europe, the series has made its way to the battlefields of North America circa 1753-1783 with a new English/Native-American protagonist called Connor. His garb looks similar to that of his ancestors Altair and Ezio but with a few more colors thrown in. The video showed some gameplay of Connor fighting for the American Revolutionaries during the Battle of Bunker Hill in 1775. After surveying the truly massive battlefield (the game’s engine can now handle up to 2,500 characters on-screen at once as opposed to the previous entry’s limit of 200), Connor moves into the woods and starts using the trees as his preferred method of travel. Lots of time was devoted to making the tree navigation fast and practical without making Connor look like Tarzan, and the results are truly breathtaking; the animations couldn’t possibly be more fluid and life-like. In fact, all of the animations for character movement were built from the ground up for this game which will undoubtedly help to establish Connor as a unique character and offer some new choices for navigation, like sliding under objects instead of having to vault over them. 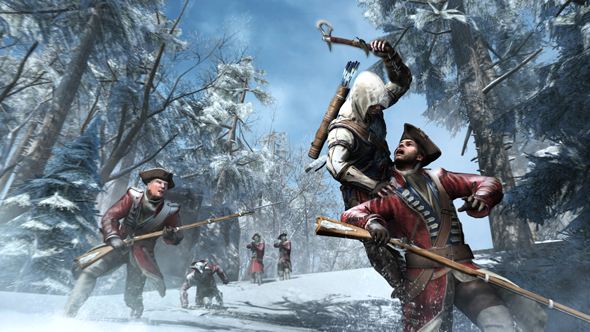 Once back on solid ground, Connor engages in some intense combat with some redcoats and we got to see the brand new combat system in action. Dual-wielding is the main focus this time, with Connor’s main weapons being his hidden blade and tomahawk. The combat was fast and furious, with Connor stabbing, shooting, countering, hacking and slashing his way to bloody victory. The system didn’t look fundamentally different from that of Assassin’s Creed II, but it was definitely more refined (and brutal). The developer who was narrating the demo mentioned that even though guns were used heavily during the Revolutionary War, they were absolutely horrible and ineffective. For that reason, combat will still be heavily reliant on Connor getting up close and personal with enemies and stabbing them in the face.

After showing off Connor’s smooth rock-climbing skills, which were researched heavily for maximum accuracy and believability, the video showed the Assassin hiding in his target’s “stalking zone”– an area that players can hide in and remain undetected while they stalk their prey. Connor’s main target was a British Army General who was, of course, a Templar. He made short work of the General’s posse with quick and stylish assassinations that kept him always in motion until he finally reached his target (and the end of the video). 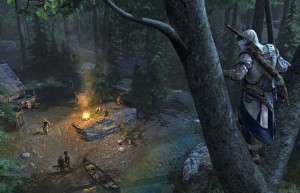 A few iconic aspects of the series were left out of the video, such as what Connor does when he’s detected (there were no hay bales in sight) and whether or not he will still be able to climb towers and survey the land below to uncover more areas of the map.

Ubisoft was definitely successful in piquing our interest in the series again. After so many titles revolving around Ezio, the series was at risk of stagnating, but all of the new additions look like more than enough to revitalize the franchise while keeping true to the incredibly popular prequels. The game sneaks onto shelves October 30th for Xbox 360, PS3 and PC and at a later unconfirmed date for the Wii U.