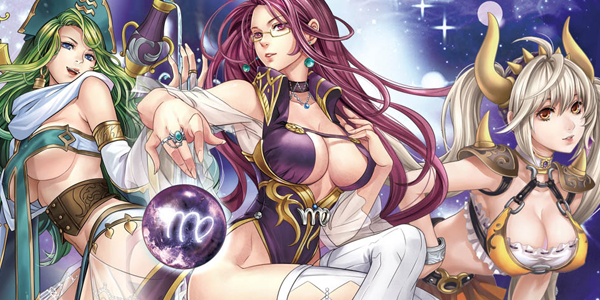 Japanime games ran a rather non-descript booth at this year’s PAX East with a minimal setup featuring two styles of playmats for use with their popular Tanto Cuore games, a physical copy of the upcoming Krosmaster Arena which is currently up on Kickstarter, and a table demoing their brand new release, Kanzume Goddess.

This is, for all intents and purposes, a deck-building game, but one with some interesting new mechanics.  Much in the way that Tanto Cuore aped the gameplay found in Dominion, Kanzume Goddess is more derivative of games like Ascension and Nightfall, but with a couple twists that give it a voice of its own.  Thematically, Kanzume Goddess pits rival pantheons of Gods and (mostly) Godesses against one another in a battle royale.  While two to six players can all battle individually, the real appeal of the game is team play, in which two sides (separated by Norse and Greek Gods) can split into groups of two or three and wage a coordinated war against their opponents. 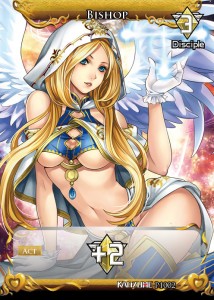 Much like any other deck-building game, each player, regardless of whether or not you are playing in teams, begins with an identical deck, in this case represented by eight “Priestess” cards and two “Sacred Guardians”. Priestesses generate faith, which is the one and only resource in the game and is used to purchase warriors from the public area, while Guardians are primarily used as defense cards in that each may be discarded to defend against two damage points.  This is important as, in Kanzume Goddess, attacks against other players will cause them physical damage instead of forcing them draw cards with negative effects, which is common in most games of the genre.

This damage is measured on an Energy Meter, a card that each players starts the game with, which is marked with horizontal rows numbered 0-25.  Each player is also able to select his or her God before starting play – there are fourteen of them (including the two available promos) and they all have unique abilities that can affect the way the game is played.  For instance, Poseidon allows the controlling player to discard two cards from their hand in order to let another player fish a card from their discard pile and put it into their hand (she is lord of the seas, after all).  A power like this is clearly best used during cooperative teamplay to give your partner an advantage.  Loki, on the other hand, lives up to his mischievous name and forces all players to draw two additional cards during their starting phase, granting them a stronger pool of cards for their turn, but in turn causing them to lose one Energy. Each God is placed on their player’s Energy Mat, lined up with their current “health”.  Each player in an individuals match begins with 15 Energy, but teams work a bit different.  Let’s say six players divide into two teams of three. Players will sit around the table in an alternating fashion so that a clockwise turn order will cycle between the teams with each player.  One person on each team will have the role of the Main God, while the other two are their Supporting Gods.  The Main God begins with 20 Energy while the others start with 10.  If a Main God’s energy falls to zero, the opposing team is victorious.  The Supporting Gods may fall to zero and be temporarily knocked out of the game and unable to take any actions until they slowly regain enough energy to come back to the game. 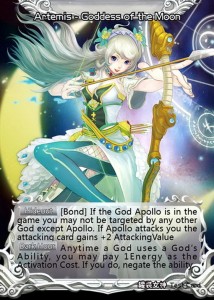 All players have access to the warrior cards in the public area, which allow players to attack, draw additional cards, or even reveal their opponents hand to weed out defense cards.  These cards, which are largely themed around the Zodiac, are sorted into six randomized decks of fifteen cards, so you won’t know what’s under the topmost card of each deck until it’s purchase and the next one is revealed (all but the top card are face down).  This leads to a lot of planning and on-the-fly decision making for another important reason – you must meet a specific criteria to play multiple card actions in one turn and therefore combo effects and attacks.  Each turn, by default, a player can use one warrior card’s action, but you’ll notice that there are three circles in the top left corner of each one.  The largest circle represents that card’s color.  The two smaller circles tell you your “follow up colors,” which means you can then play another warrior of either of those colors and use their action.  Then, of course, that warrior will also have colors that may follow it, so it encourages a bit of planning to maximizes combos and build a hand that works.  A similar mechanic is found in the game Nightfall, but it’s much more streamlined and simplistic here.  Helping you do so is another interesting tweak seldom found in deck builders – you discard your hand and the cards you use from it by the end of every turn, but any cards you purchase during your turn are placed face-down on top of your draw deck, ensuring you will pull them into your hand for the next turn.  This also means that your opponents know you have them as well.  This tiny bit of knowledge of what to anticipate (for players who are paying attention) can make for some really cutthroat moves in an otherwise random game. 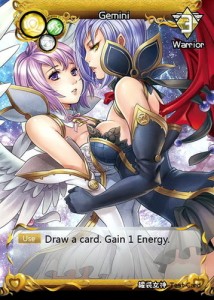 The components are a mixed bag.  While I’ll get to the subject matter  of the artwork in a bit, all the card art is extremely well done and eye-catching.  The color palette is vibrant, all the card information is easy to spot, and the text is relatively easy to read.  The quality of the card stock however, could be better.  The cards are rather thin and will be prone to damage if not sleeved.  The packaging is another issue as the game itself is packaged in a cylindrical tin.  While it sports a fetching and unique design, it’s not an ideal solution for storing the cards, specifically if you do sleeve them (as only a third will fit back into the tin).  The rule book is succinct and easy to understand and the package was topped off with a bonus…cell phone charm?  I may be out of the loop but I thought those stopped being a thing many years ago.  Regardless, if you pick up the game, I’d recommend getting 200 standard size sleeves (63.5mmx88mm) and a box.

The only thing that may make gaming enthusiasts pass this one up (or maybe gravitate towards it depending on their affinity to large-breasted anime girls) …are all the large-breasted anime girls.  Nearly every card, while beautifully illustrated, is loaded with fan service that’s about as subtle as an atom bomb.  It’s a shame because, similar to the equally questionable subject matter of Tanto Cuore, it slightly diminishes a really stellar game.  Both feature a surprising amount of depth and strategy while incorporating and perfecting some of the best aspects of the games they ape.  But putting either one on the table is bound to get some dirty looks thrown your way – or, even worse, creepy dudes who are way too interested in looking at the cards.  Still, that shouldn’t deter a purchase, especially if you’re a big fan of deck-builders, as it’s definitely a fresh, fun experience.  Furthermore, if you dig card games and copious amounts of T&A, this is one you’ll certainly want to keep abreast of.  Sorry, I had to.