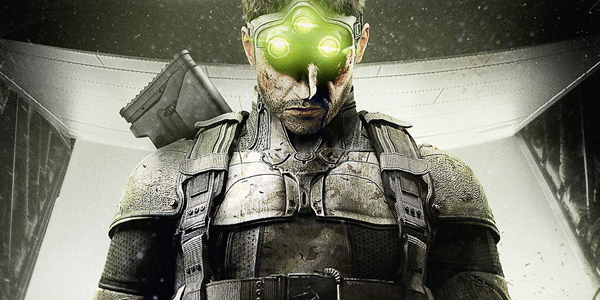 Behind closed doors at this year’s PAX East in Boston, we were able to sit down with Scott Lee, the art director for Ubsoft’s upcoming Splinter Cell: Blacklist, for an intimate look at the gameplay and new features the game will offer when it’s released this summer.

Before jumping into a couple of the titles later levels, we had a chance to see the Paladin.  This flying fortress serves as the base of the Fourth Echelon and acts as a hub in which you are able to interact with your crew, upgrade your weapons and gear, and determine upcoming mission objectives.  Sam Fisher has been named as leader of this Fourth Echelon, a group of operatives assembled by the President to seek out and shut down the activities of the Third Echelon, which was shut down due to its corruption.  The Paladin serves as a means to deliver Sam and his team anywhere in the world at the President’s order, and it’s not long before a number of escalating terrorist attacks will send you scrambling to all corners of the globe in an effort to shut down their network and save the world from their “Blacklist” countdown.

Having debuted over a decade ago, I still hold the original Splinter Cell’s stealth gameplay in extremely high regard.  The five sequels that followed have all introduced incremental changes which have, at this point, evolved the franchise significantly, which a much stronger focus on action-oriented gameplay and accessibility with a stronger cinematic flair.  And while there have been missed opportunities here and there, the franchise has an outstanding track record for delivering an intense experience.  What we were able to take away from Splinter Cell: Blacklist was a feeling that this is truly an amalgamation of everything to date that has made Splinter Cell great — it seems Ubisoft has taken the parts that worked best from their previous titles and employed them here to great effect. 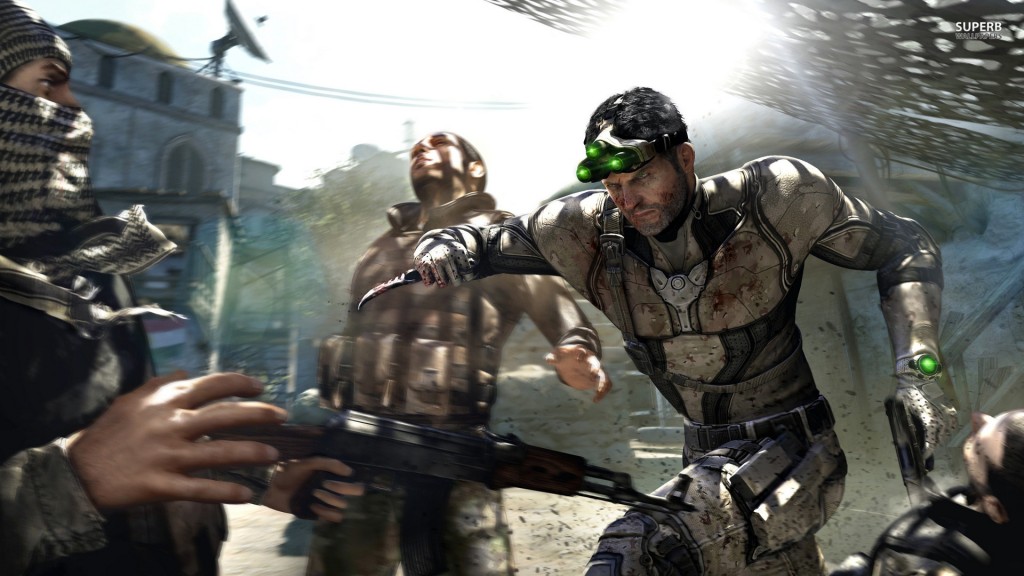 So for starters, Scott jumped into a daytime level which found Fisher dropped into the streets of Benghazi, working his way towards a person of interest.  Upon choosing to move forward with this mission aboard the Paladin, you are given the choice of three difficulty levels (normal, realistic, and perfectionist) and then greeted with a stylish cutscene which outlines your objectives.  Now, we got to see him demo perfectionist mode and, if you’re a hardcore fan that follows the series and loves to play in a patient, stealthy fashion, this mode is for you.  We’re talking one-shot, one-kill with many of Sam’s stronger abilities and gadgets unavailable to players.  As Scott ducked into shadows, raced along walls, and concealed himself behind objects to get the drop on the enemy (or avoid confrontation entirely), a few things really stood out.  First, the movement in this game is unbelievably fluid and seamless.  Ubisoft’s use of live motion capture on their actors must have really helped them produce realistic animations, because Sam looks incredible and is able to interact with the environment in a believable fashion.  It’s the small details that really pull you into the game — the way Sam shifts his body weight while sliding behind cover or descending off a ledge for example.  Even the creases in the fabric on Sam’s special ops suit and his attached gadgets and weapons seem to react naturally with his movement. 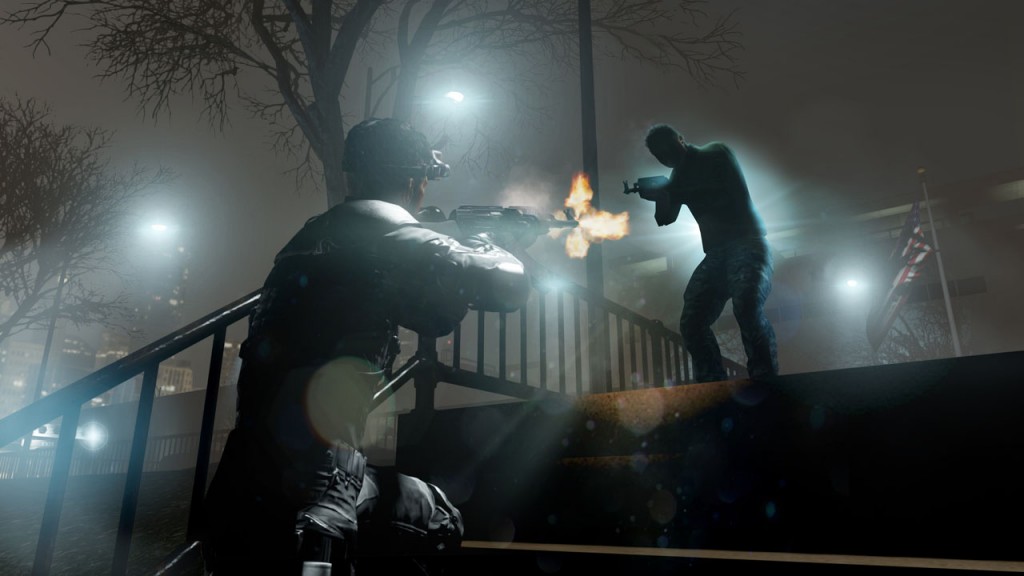 As nice as the character models and their animations look though, the real star here is the lighting and they way it plays with the environment.  The developers did a great job of really driving the point across that, in Splinter Cell, the light is your biggest enemy.  Through the use of beautiful looking, and sometimes blinding, lens flare effects there is a noticeable contrast between bright and dimly lit areas.  It creates another layer of tension that will leave you feeling exposed and players will instinctively want to avoid.  Aesthetically though, the lighting looks incredible and adds a sense of realism that really helps to immerse you in the action.  Seeing Scott Lee take a stab at stealthily navigating the level, narrowly avoiding detection several times while moving towards his destination, was an exciting experience just as a spectator.  At a few points, enemies got the drop on him, which leads to an immediate fight or flight response and really puts you on the edge of your seat.

Not a fan of stealth gameplay?  Splinter Cell: Blacklist not only gives you the ability to play the game as you see fit, it rewards you for it.  Even though going into a situation with guns blazing will alert all nearby hostiles, you can customize your character with heavier armor and a more destructive arsenal to deal with the threat, whereas a stealth player will likely choose a light loadout to suit their style.  Through an organic challenge system, the game will react to your play style by throwing new challenges at you based on the way you handle yourself and then compensate you accordingly.  The economy system in the game is constant whether playing single-player, co-op, or multiplayer, and can be used to purchase upgrades across all modes of play.  Everything from your weapons to your suit and equipment and even your plane, the Paladin, is upgradable and will grant you stat bonus, new proficiencies, or additional skills.  This is a mechanic I’m extremely excited about and will likely add tons of replay value to the title as players are able to build their economy while playing the game in any mode they see fit. 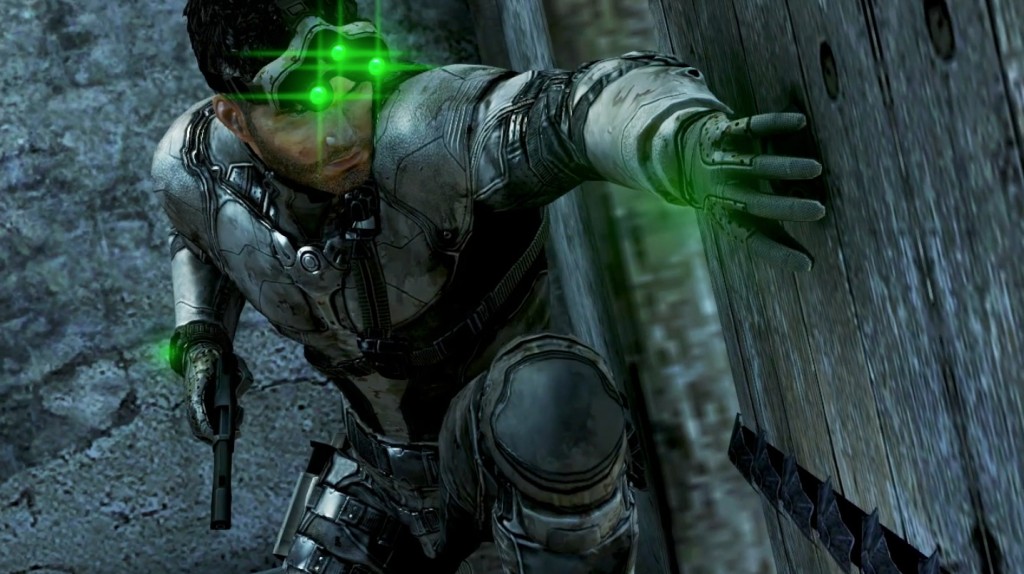 During a demo of a nighttime mission, we were again able to see not only the amazing use of lighting and the different ways it can be manipulated to distract enemies, either from switching them off or blowing out areas of artificial light with an EMP, but also the phenomenal weather effects.  Rain was pouring down for the duration of the level’s introduction and the way it pooled and rippled on the ground just looked incredible.  It’s clear any way you look at it that Ubisoft is putting a ton of love and care into this project.  The only item that I found slightly off-putting at the beginning of our time with the demo build was the “new” look and sound of Sam Fisher himself.  Blacklist’s Sam is noticeably younger looking than he appeared in Double Agent and Conviction and is no longer voiced by the gravelly-sounding Michael Ironside.  Instead, Eric Johnson now serves as the actor for Fisher, providing both his likeness and voice to the role, which was all recorded as the actors interacted in real-time in a sound/performance capture studio.  I will admit though, that while the change was jarring at first, it only took minutes to adjust to the new appearance and voice of the character. 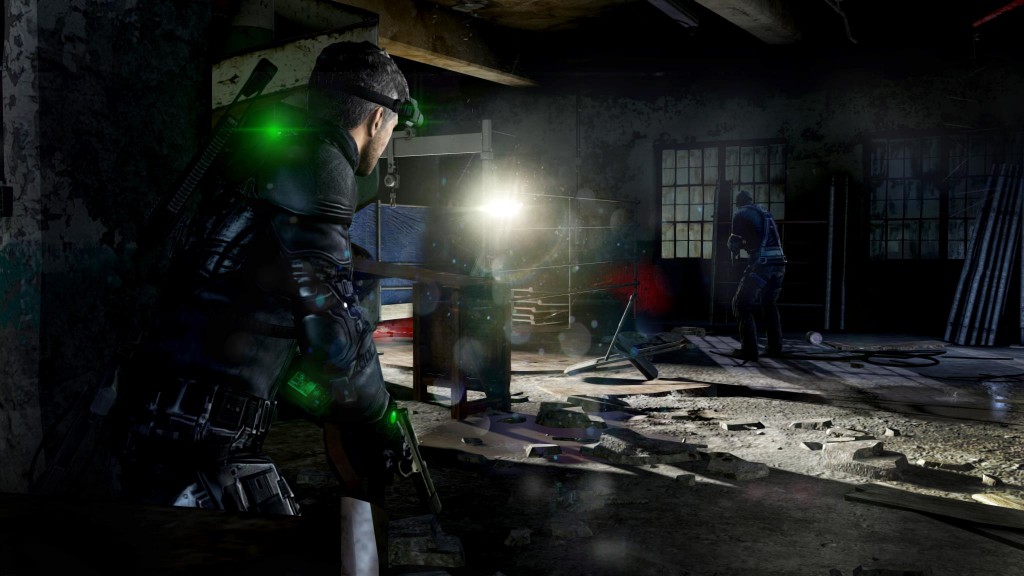 Also, as stated earlier, co-op missions will be returning and are separately selectable from the Paladin’s “strategic mission interface” hub.  Even more exciting is the fact that Spies vs. Mercs mode is making a comeback.  While we were only able to see the single-player campaign in action, if Ubisoft sinks the same level of detail and polish into the multiplayer offerings, they’ll have put together a stellar package both online and off.  As it is, the stealth gameplay and more open nature of the levels we saw, coupled with the killer upgrade system and freedom to outfit your character to play the game as you see fit, puts Splinter Cell: Blacklist at the top of my most anticipated games of the summer.  Keep an eye out for it in late August on Xbox 360, Playstation 3, and PC.