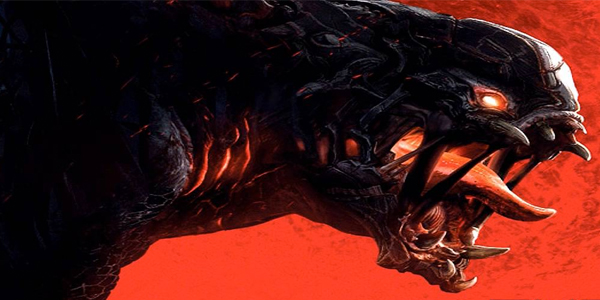 The booth that 2K had set up for their AAA title, Evolve, at PAX East may have commanded the most attention and attracted the longest lines at the convention.  Whether it was to get a bit of play time in at their thoroughly well-designed gaming stations or simply for a photo opportunity with their enormous monster statue, fans swarmed to the booth non-stop the entire weekend.

Turtle Rocks Studios, who previously worked on the rather brilliant Left 4 Dead series, have built on the cooperative shooter model they’ve created and have developed something really special.  Evolve puts five players into an asymmetrical 4 vs. 1 match where a group of specially equipped hunters take on one super-powerful monster.  The introductory video that preceded our play time explained the different roles that the four hunters play.  The Trapper class is armed with a Harpoon Gun and specializes in tracking the monster’s location and attempting to slow its advance.  The Support role is all about providing defense to the other players with a shield-gun which can generate a force field around one nearby friendly unit or dealing massive damage remotely with the help of an orbital barrage designator.  The Medic plays the ever-important role of keeping teammates alive by healing them and is also armed with a sniper rifle as to stay out of close-range combat with the monster.  Finally, there’s the Assault class, who provides the greatest offensive advantage to chip away at the monster’s health with a slew of firearms and mines. 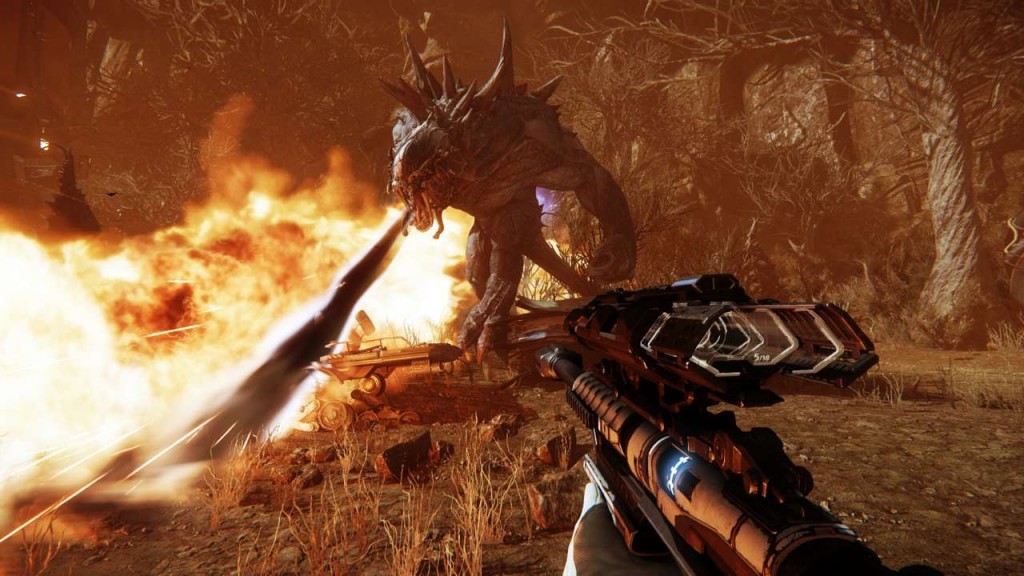 While Turtle Rock promises that there will be several monster types, hunter classes, locations, and multiplayer modes, I’ll walk you through a bit of what we experienced on the floor at PAX East.  The monster in the demo scenario was the Goliath, a massive, fast-moving beast.  A group of five was seated around the PCs running the game, with hunters on one side and the monster player on the other, and all fitted with headsets.  In addition to the hunters being able to converse with each other, both the hunter group and the monster player also had separate staff members with headsets on-hand to watch their progress and give them advice.  All players were dropped into a dense, lush jungle like something out of Predator, only with a futuristic compound installed which houses a generator.  At the beginning of the match, it would be ill-advised for the monster to attack the hunters as they have the upper hand.  This gives way to a tense game of cat-and-mouse where the monster tries to avoid contact while feasting on as much of the area’s wildlife as possible in order to evolve.  The monster can evolve by three stages, each bringing new powers and greater offensive capabilities.  Hunters have a few tricks in order to track the beast, such as searching for tracks, setting up sensors, and watching for subtle cues in the environment, such as birds flocking out of an area in the distance.  Unfortunately, due to our inexperience, our squad was unable to find the monster until it had already levelled up once.  There’s nothing worse than getting the message on your screen stating the creature had evolved or, worse yet, coming across a giant cocoon left behind in the jungle marking the area that the evolution occurred.  We were able to knock down about a third of the monster’s health as the assault and trapper classes kept the pressure on and support and medic players attempted to soften the monster’s tremendous blows. 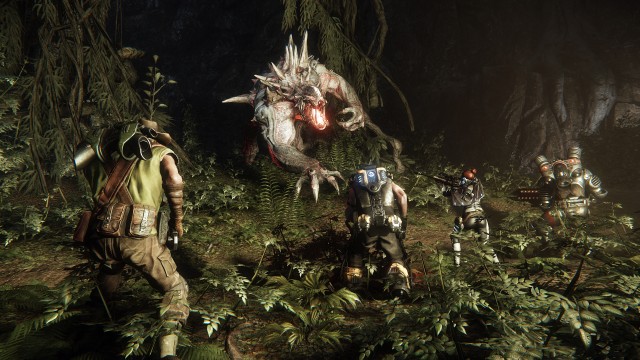 Eventually, the half our team fell unconscious (but not before an orbital barrage devastated the area), allowing the monster to make a hasty retreat to try and evolve further and for the remaining hunters to revive and heal their comrades.  We set off to try and track down the monster before it could get its bearings but, even while the hunters’ equipped jet packs allow them to cover ground quickly, carnivorous plants and traps slowed our progress, allowing the beast to fulfill its final stage of evolution.  At this point the monster was a huge, fire-breathing, rock-throwing menace.  Now having the advantage, the it would be able to win the match by either killing all the hunters or destroying the aforementioned generator.  The final showdown escalated to the top of an industrial complex in the middle of the jungle where we all converged and the monster eventually got the better of us.  Its melee attacks seemed to throw us hundreds of feet and deal tons of damage, and it was quick enough to outrun our maneuvers.  Clearly, the game stresses the need to destroy the monster before it can accumulate this much power. 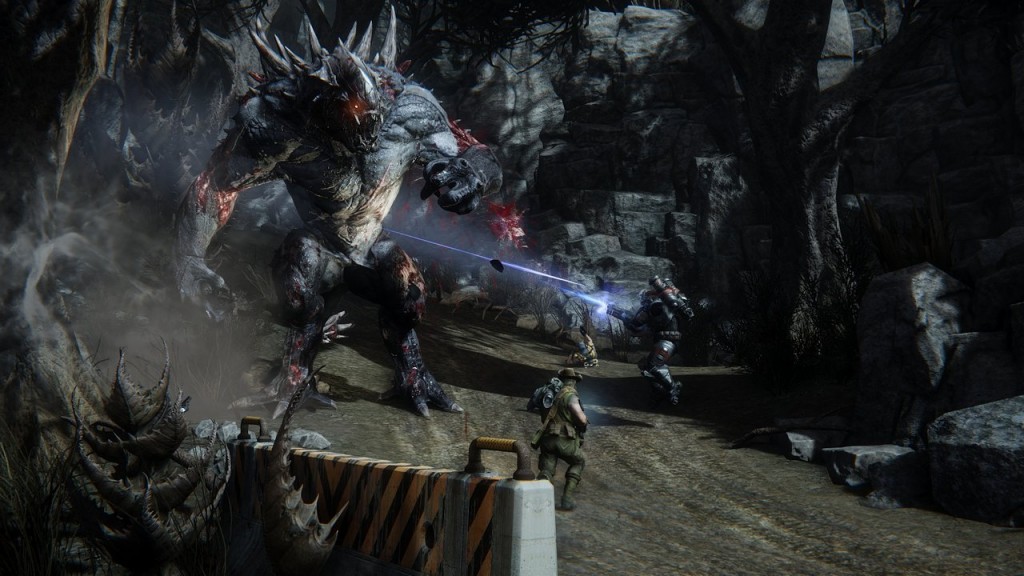 While it was disappointing that we were beaten so mercilessly, it only made my excitement for the game stronger.  I loved the asymmetric nature of the match and the importance of constant communication in the party to survive and be tactically viable.  If the entire game was only limited to what we played, it would already be extremely solid, but I can’t wait to see what other locales and monsters will be in the final build.  The visuals looked amazing, with incredible lighting effects within the exotic jungle setting and a silky smooth frame rate.  It was definitely one of the most enjoyable experiences at PAX East and I have no doubt that it will have a huge community of players when it launches later this year for PC, Xbox One, and Playstation 4.