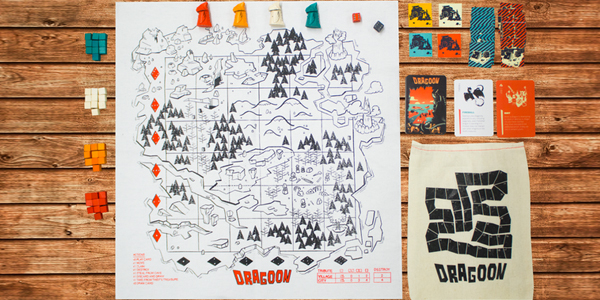 Leading off our PAX coverage, we take a look at the single best gaming experience on the expo floor.

Indie publishers were prevalent at this year’s PAX East with an abundance of developers running demos and getting the word out on the tabletop games they’ve created — some shown as early test builds and others nearing the final stages of the development process.  No one quite had their shit together like the guys at the Lay Waste Games booth, though, who drew crowds to check out Dragoon, a fast-moving action/strategy board game with killer components and a slick art style to match. 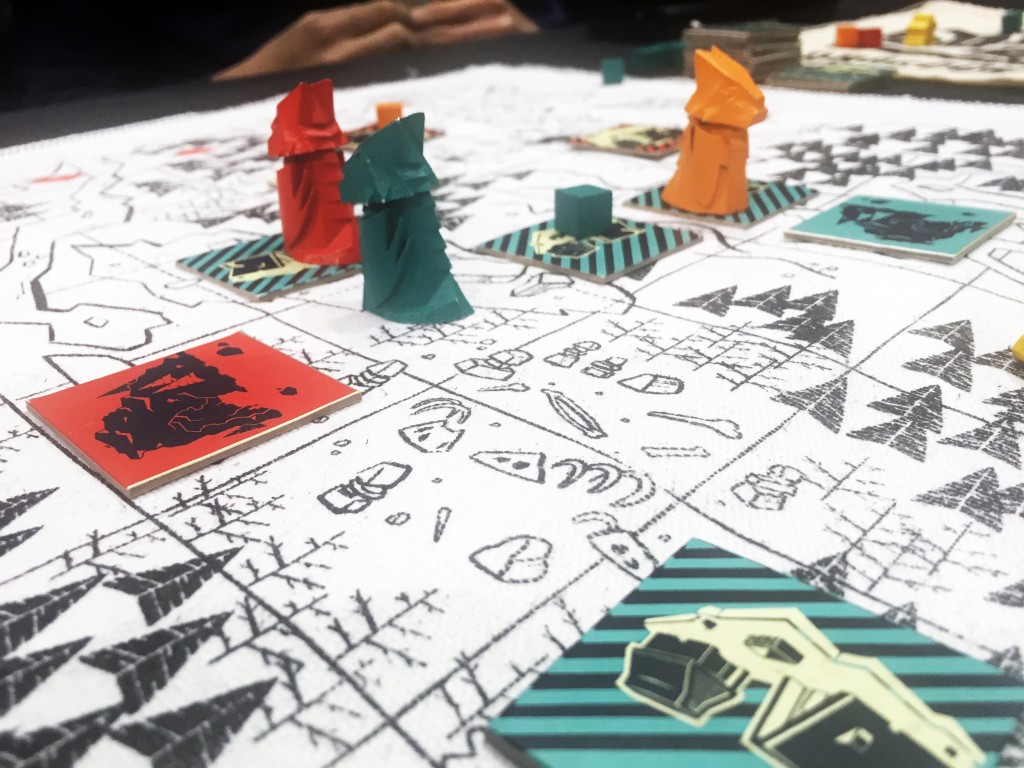 Before I even get to the gameplay itself, I have to acknowledge the developers’ initial presentation strategy and how it was wisely focused on those flashy components.  They’ve obviously invested countless hours into the design and execution of the physical game pieces and are clearly not only proud of what they’ve achieved, but also extremely confident that consumers will dig what they’ve created.  Attendees who meandered by the Dragoon booth were typically greeted by a team member from Lay Waste Games inviting them to pick up and hold one of the four solid metal dragons used as player markers, evoking reactions ranging from “Wow, this feels heavy” to “I’m pretty sure this can be used as a weapon”.  I’ll admit to being impressed when I was handed one as well.  Despite the tiny stature, the serious heft of the pieces combined with their unique, angular design makes each dragon feel formidable and menacing — without a doubt one of the nicest player markers I’ve seen grace a board game.  With my interest piqued, I was then presented with the rest of the package: a screen-printed cotton map that serves as the playing surface, two metal dice, dozens of wooden cubes and thick cardboard tiles, an assortment of cards, and a canvas bag to store everything which doubles as the score track.  Frankly, Dragoon looks beautiful, with a clean, minimalist aesthetic and a whimsical art style throughout that does wonders to draw you into the experience before you even roll the first die. 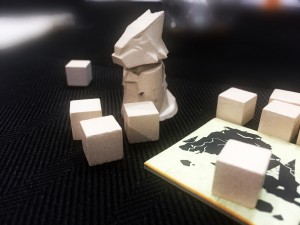 Thankfully, the quality doesn’t stop at the physical components as it’s also an absolute blast to play.  Just to provide a brief run-through of ruleset, each game begins by determining the location of each player’s cave within the six-by-six square grid that makes up the game board, which is pre-determined based on the number of players participating.  Each player starts with a hand of three cards and places their Dragon marker on their cave (denoted by their Dragon’s color).  At the beginning of the first and every subsequent round, a red and a black die are rolled to determine the placement of villages on the board.  This represents pesky humans encroaching on your territory and settling on the surrounding land.  The number of villages rolled for every round is always one more than the number of players.  With the play area populated, the first player takes their turn.  In the first round, this is determined randomly.  In every round that follows, the player with the least gold/lowest score gets to decide who becomes the first player.  The active player draws one card from the facedown deck and proceeds with using exactly three action points (unless granted more by way of a special card ability) to interact with locations and other players in a number of ways.

One action point is spent each time you move to an adjacent space and to destroy any village or city tile you happen to be standing on at the moment.  Instead of incinerating a hapless village, you may instead opt to spend an action to claim dominance over the area, placing a wooden cube in your player color on it.  The former grants an immediate reward in gold (the game’s point system) while the latter can lead to much greater rewards over the course of the game, assuming they survive your opponents’ wrath.  Using an action point while standing on an enemy dragon’s cave allows you to loot some of their gold and claim it for your own, but ending your turn there can be a risky venture that will result in its owner sending the uninvited guest back to their own cave, losing gold in the process.  If the thief’s treasure is on the board, player’s sharing its space can use an action to interact with it, gaining gold and causing the thief to relocate their riches to a new area.  The cards in your hand can be played as a free action anytime it is relevant to do so and there is no limit to the amount of cards you can accumulate, although drawing a new card will require you to spend two action points (or one if you discard a card as well).  This can lead to chaining cards together for devastating late-game combos. 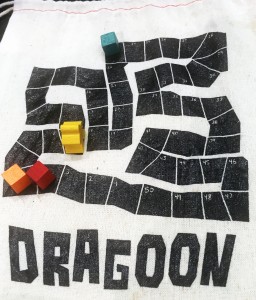 Once all players have completed their actions, everyone rolls one die to determine how the locals will pay tribute to them.  This is where claiming areas on the board can pay off bigtime.  Rolling a four or five will net you gold for each village or city you’ve claimed — 1 and 3 gold respectively — while rolling a six will earn you 2 or 4 points for each.  Thematically, this represents the humans worshipping your malevolence and offering riches to appease you.  Rolling a two or three has no effect and rolling a one will actually cause one of your claimed lands to lose faith in you, forcing you to remove your claim from one area.  The risk-vs-reward factor in deciding whether to claim lands or utterly crush them is an interesting strategic mechanic, especially when you consider that an opponent can always run over and raze the villages you’ve worked so hard to control.

Of course there are also cards that can sway your advantage or at least ruin your opponent’s plans.  “Riot,” for example, can be played when someone is trying to destroy or claim an area that you’ve already claimed and forces the attacker to spend an additional action point to do so — if they can’t or won’t, your location remains intact.  Conversely, cards like “Lay Waste” allow dragons to automatically destroy every city or village they move across on that turn.  This kind of “take that” element is a huge part of Dragoon’s charm and, while it may not gel with people who steer clear of combat and heavy interaction in their games, it’s perfect for the group I typically play with.  On top of being able to saunter into other player’s caves to steal from them and then burn cities full of their adoring minions to ash, simply passing over another space containing an enemy dragon will trigger combat.  This is simply handled with a die roll from each party with the attacker winning ties and can result in the loser scrambling back to their cave a few gold poorer.  It’s intense, back-stabby, and ridiculously fun.

At the beginning of the next round, villages are placed as with dice rolls like normal, keeping in mind that if a village already exists where another would be placed, that village becomes a city (represented by a red tile as opposed to a blue one).  Play continues like this until a player collects at least fifty gold pieces, which triggers the end of the game.  The entire experience takes about 30-60 minutes depending on how your group plays.  Overall, it’s actually a pretty light game and the rules are easy to become acquainted with.  Even non-gamers can get the hang of Dragoon in a couple minutes and will be scorching your villages in no time.  The physical design of the game fitting into a bag that, in and of itself, is also used in the game makes it an efficient, portable package, perfect for stuffing into a coat pocket and bringing to just about any social gathering.  While the learning curve is shallow, there is a surprising depth to the strategic choices you make over the course of the game and there is plenty of replayability to keep this coming back to the table. 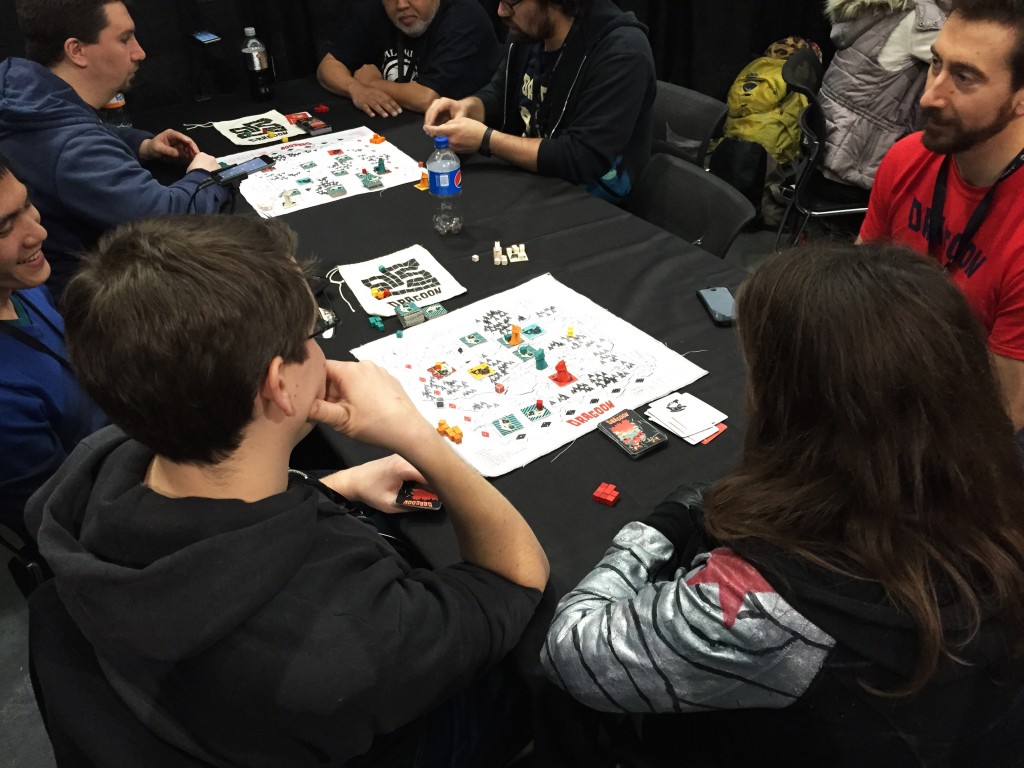 It’s usually pretty indicative of how enjoyable a gaming experience is by watching the body language of those playing it.  In Dragoon’s case, every table was packed with gamers who appeared deep in thought, frantically looking for the best scoring opportunity and hoping the state of the board doesn’t drastically shift before it arrives at their turn, or simply grinning ear to ear because of the move they just pulled to totally screw over their friend.  One thing that nobody appeared to be was bored which, to me, tells a lot about how engaging a game is.  Even between turns, the down-time becomes a tense waiting game to see how many of your settlements will survive to see them pay out.  While the components pictured in the photographs here are early prototypes, it gives a good indication of the direction they are heading with the final design.  Check out playdragoon.com for updates on their Kickstarter campaign which, as of writing this, is fully funded with several stretch goals unlocked to make the components even more fantastic.  At $45 for the basic edition, Dragoon is worth every penny — a thematic, insanely good time where you get to play as a dragon.  What else really needs to be said?  Get your pledge in on their Kickstarter page — you’ll be glad you did.