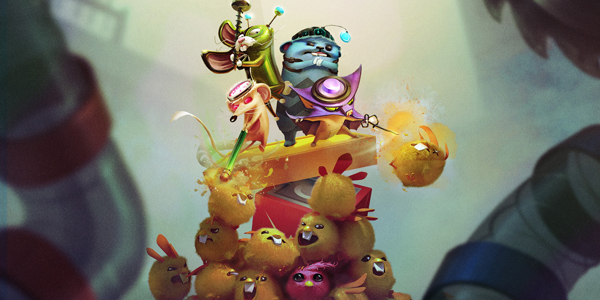 Spearhead Games, a developer out of Montreal, was assembled by talent who had previously worked on A-List titles such as Assassin’s Creed III, Dead Space III, and Army of Two.  Truthfully, I was altogether new to the company and the game until I had, quite literally, stumbled across their booth Friday evening (the good people at PAX were generous enough to give media access to the floor after hours that night along with copious amounts of wine), but was instantly grabbed by the aesthetic of their modest booth.  Adorned with all manner of medical supplies, monitors, and beakers, their setup had a great theme to it – backlit x-rays of their game’s characters were on display in the forefront and the presenting devs were even dressed in lab coats.  While their presentation peaked my curiosity, the fun-looking game glowing on the screen had me reaching for the controller. 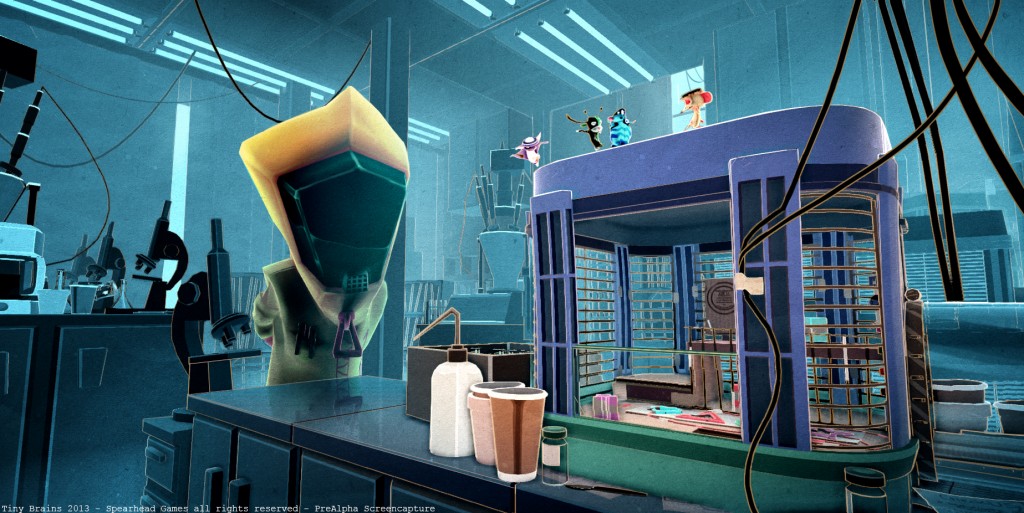 Genuinely fun multiplayer experiences are becoming few and far between.  Sure, jumping into a pulse-pounding session of Gears of War can be entertaining but I will take a couch co-op run of Castle Crashers over it any day of the week.  It may go far in explaining the reason that tabletop gaming has been steadily gaining popularity, with many gamers having dedicated board game nights in lieu of LAN parties – the games that lent themselves to that simply aren’t there anymore, with most dedicated to the anonymity of online sessions.  People like to get together and share the experience of a good game and Spearhead takes that philosophy and runs with it.  Simply having four controllers hooked up and at the ready was enough to make players gravitate towards it.  I grabbed a controller to start a session and, even with a nearly empty floor, people seemed to just appear out of nowhere to join up within seconds. 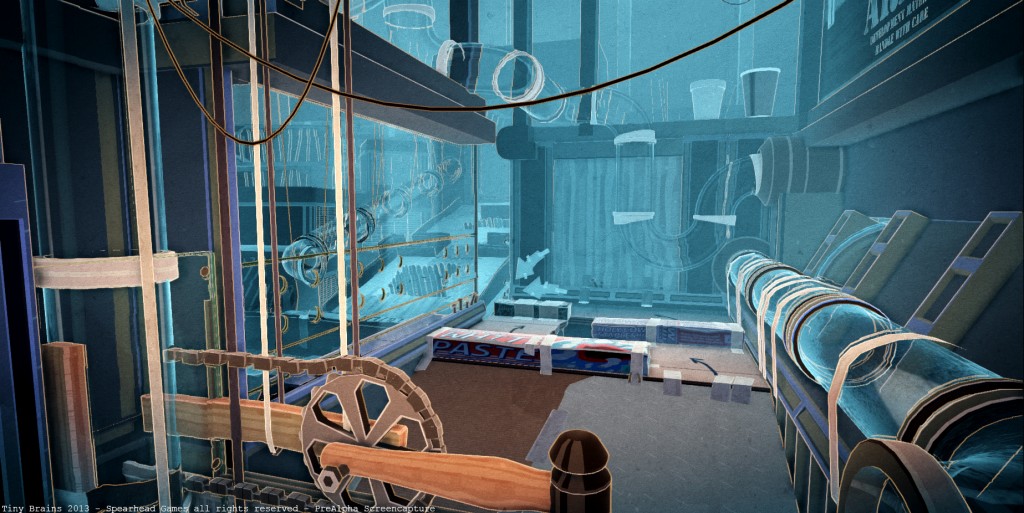 Okay, so let’s check out the premise of the game.  In Tiny Brains, each of four players controls a lovably disfigured and unique lab rodent, each with their own special power.  At the beginning of the game, we watched as a maniacal scientist held the small animals inside of a jar before dumping the lot of us into the first of several puzzle rooms.  Part of the fun initially was figuring out what we could do.  Each character can do something the others can’t, but it’s not immediately evident.  The character I was controlling, a shaved purple bat, had the ability to force push objects away from him.  Two other other players, a rabbit and levitating mouse, were able to do things like grapple objects to pull them closer and teleport/switch positions with objects respectively.  The fourth was a pudgy blue hamster who is able to materialize climbable block platforms for others to use.  It wasn’t long before we got through the first couple rooms with minimal communication but, as we went on, discussing an action plan with the group was a must.  Before we knew it, what started off as a quiet game demo turned into a booming mix of excited yelling and laughter as trial & error led to hilarious failure, while success was met with cheers.  Essentially, you can’t solve the mad scientist’s puzzles and progress without working together and using all your powers to their fullest potential.  Some rooms even look to have multiple solutions to discover. 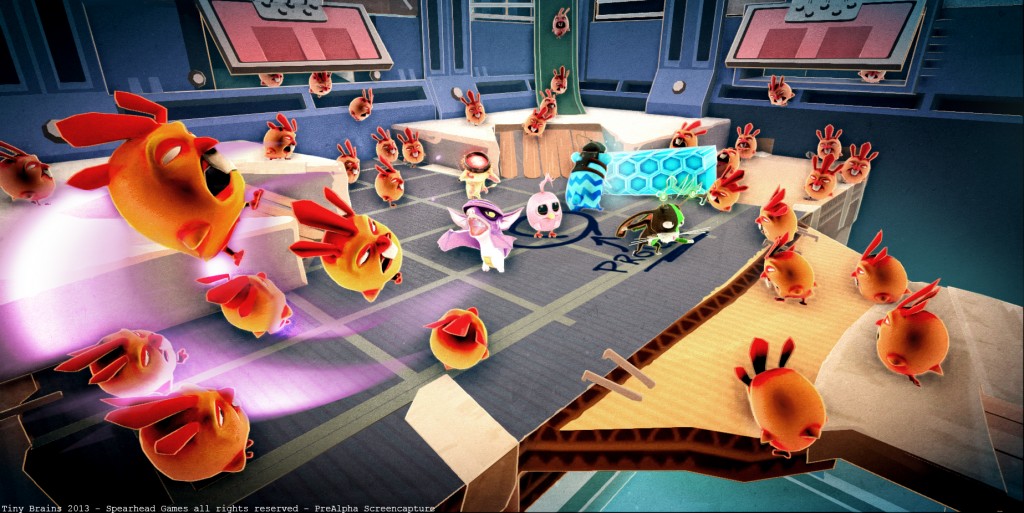 A few levels in, things got real intense when we had to defend a small (and adorably sad-looking) baby chick from an onslaught of enraged, mutated chickens.  Using both traditional attacks and combinations of our powers, such as a force-pushed hamster block, we battled through what seemed like hundreds of those little bastards and had a blast doing it.  Of course, you can always play the game with fewer than four people and even solo if you want to as you’re able to swap between characters on the fly in that situation.  Online modes will be offered as well for those nights that you just can’t get everyone together but, trust me, local co-op with your friends is where this game truly shines.  And once you complete the campaign mode there are also exceedingly difficult challenge maps that will put your teamwork to the ultimate test.  Scheduled to release this summer for PC and hopefully consoles as well, keep your eyes peeled for Tiny Brains.  In the meantime, check out the teaser trailer below as well as some great concept artwork. 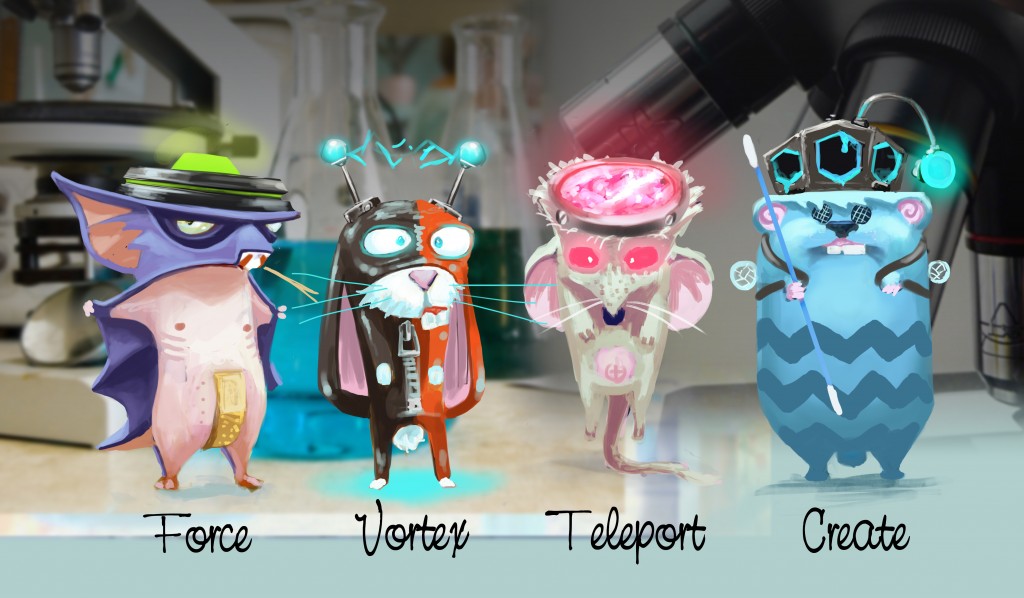 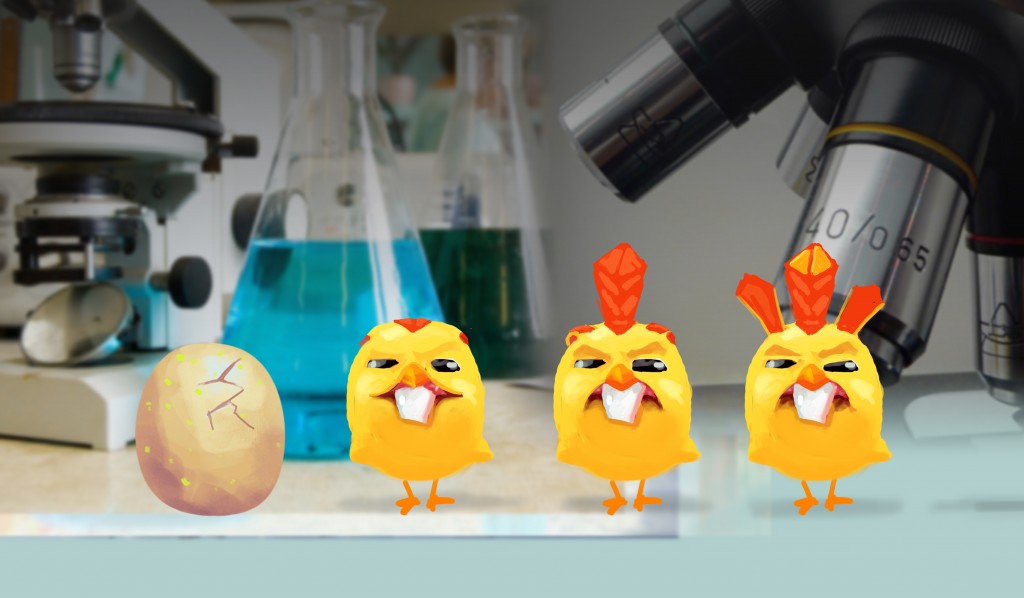 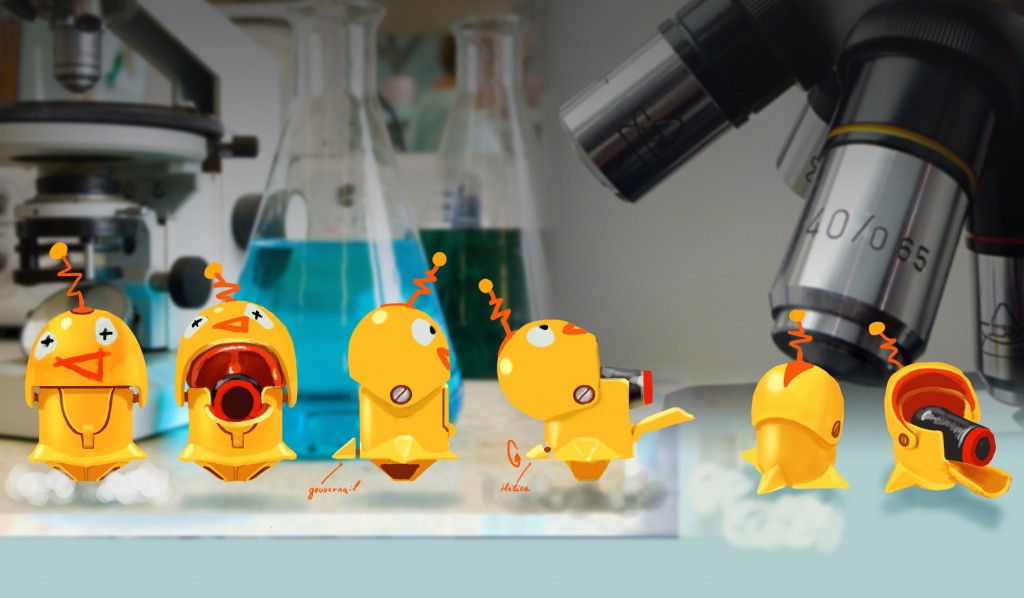