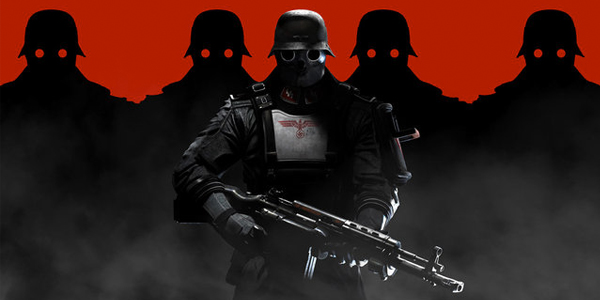 More than two decades ago, Wolfenstein 3D paved the way for modern first-person shooters.  Now, Wolfenstein: The New Order, the ninth installment in the franchise and the first since 1992 to be developed by a studio other than id Software, is primed to bring the series back to the forefront of the genre it once created.

Publisher Bethesda Softworks put on a presentation for Wolfenstein: New Order which was, frankly, the highlight of PAX East 2014 for me.  Running on a Playstation 4 console, the demo levels took place in 1946 as World War II still raged on in this alternate history.  After an intense introductory/tutorial sequence in which your plane is blown out of the sky, series protagonist B.J. Blazkowicz crashes to the sea and makes his way to a ravaged battlefield surrounding Nazi-controlled bunkers.  Tasked with destroying an automated enemy turret, and later disabling a series of anti-air turrets, players are immediately launched into unrelenting action.  Running straight ahead into the first trench you see that can provide some cover, explosions and gunfire are occurring all around you.  The sound design here is jarring and immersive with each weapon providing a satisfying punch and a score that nicely compliments the on-screen chaos.

While there the HUD is minimal and no arrows appear to guide you to your destination, waypoint markers will alert you of nearby items that are relative to outstanding objectives and a map (called up by pushing down on the d-pad) can be used to determine where you’re heading.  For the most part, the title’s control scheme will be familiar to anyone who plays first-person shooters.  There are a few interesting tweaks like I really enjoyed here though – one of which is the ability to lean in any direction, including around corners, popping straight up from behind cover, or even lowering your face to the floor.  In an early part of the game, Blazkowicz comes to a locked door with seemingly no way to pass.  When you lean down though, you find that there is a small slot in the bottom of the door, allowing you to see (and take shots at) a Nazi soldier’s feet.  With the door no longer blocked by the guard, it swing open allowing you to finish off your target.

The enemies populating the area were largely comprised of heavily armored soldiers, outfitted in black metal suits with some donning intimidating respirator masks/helmets.  Armored, semi-mechanical dogs also patrol the area and will sprint at you with lightning speed, lunging for your throat unless taken out quickly.  Thankfully, there was no shortage of weapons on hand to take down whatever enemies were thrown my way.  Automatic rifle and submachine gun ammo could be recovered from downed foes and I usually had a healthy supply of stick grenades to clear out larger pockets of resistance.  Most of the firearms can even be dual wielded for maximum ridiculousness at the expense of not being to aim down the sights of either weapon.  Make no mistake, Wolfenstein: New Order takes a decidedly old-school approach, offering run & run action with a supremely high body count.  It revels in the heyday of shooters, when health and armor pickups were the norm and multiplayer modes were an afterthought.

Thankfully, it takes those retro sensibilities and transplants them into an aesthetic that’s very much “next gen.”  Even through the drab color palette (it was set in a war-torn wasteland after all), the character models looked incredible, the semi-destructible environments were impressive, and the whole thing seemed to effortlessly run at 60 frames-per-second.  Hopefully the Xbox One version will sport an equally impressive build.  The voice acting was equally excellent, with both the main scripted dialogue and enemy AI banter forming a really engrossing atmosphere.

By the time the demo had concluded, I commandeered an anti-aircraft cannon, witnessed towering mechs devastating the countryside, and left scores of dead soldiers (or whatever pieces remained of them) in my wake.  Developer MachineGames did an outstanding job with delivering an experience that does well by the prestigious Wolfenstein franchise – a streamlined, grindhouse thriller, polished to cinematic beauty.  It’s exactly what I’ve been looking for from this series (as the prior sequels had been less than impressive) and from the genre in general.  Now that I got a taste, the release date of May 20th can’t get here quickly enough.  Look for it on Xbox One, Playstation 4, PC, Xbox 360, and Playstation 3.  Pre-ordering will also get you an invite to the upcoming beta for the next Doom title on next gen consoles.