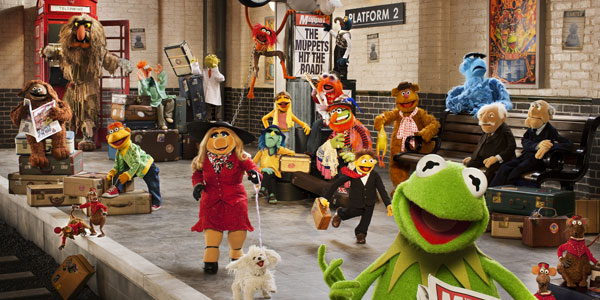 The sequel to the surprisingly rad Muppets movie kicked off production, and the first image from the sequel has been revealed.

I absolutely adored The Muppets, so when Disney inevitably announced the sequel, I was excited.  When it was revealed that choice comedians (and vocal Muppet-philes) such as Tina Fey and Ricky Gervais would be part of the new movie, I got even more excited.  So now, of course, I’m beyond stoked, because production of the new movie is officially underway!

EW got thew first image from the new Muppet film, which doesn’t reveal too much (aside from the fact that Walter, the new recruit from the previous movie, is still part of the gang)… but EW’s article is quite a bit more forthcoming with the plot, which will apparently revolve around a successful World Tour for the troupe, only to find them wrapped up in a jewel theft caper orchestrated by a Kermit doppelganger named Constantine.  I dig that this sequel sounds like it’s trying to echo The Great Muppet Caper in some ways, much as The Muppets felt a little like their original big screen outing.

I’m sure lots more will be coming around The Muppets… Again! as the filming continues, but in the meantime, I have high hopes, warm feelings, and this press release:

BURBANK, Calif. (January 30, 2013) – The filmmaking team behind 2011’s celebrated film “The Muppets” reunites as Disney’s “The Muppets … Again!” kicked off production last week in London. The all-new global Muppets adventure welcomes Ricky Gervais, Ty Burrell and Tina Fey to the mayhem, along with Kermit the Frog, Miss Piggy, Walter and rest of the Muppets. The film is directed by James Bobin (“Flight of the Conchords,” “Da Ali G Show”), who was just nominated for a BAFTA for “The Muppets” (Outstanding Debut by a British Writer, Director or Producer), and produced by the Academy Award(r)-nominated team of David Hoberman and Todd Lieberman (“The Fighter,” “The Proposal”). With a screenplay by Bobin and Nicholas Stoller (“The Five-Year Engagement”), who is also executive producer with John Scotti, “The Muppets … Again!” will feature music from Academy Award(r)-winning songwriter Bret McKenzie (“Flight of the Conchords”), who won an Oscar(r) for best original song for “The Muppets” (“Man or Muppet”). The new film will hit the big screen March 21, 2014.

“It’s great to be back working with the Muppets,” said Bobin, “some of them even remember my name occasionally now. As for the movie, it’s a tip of the hat to the old-school crime capers of the ’60s, but featuring a frog, a pig, a bear and a dog-no panthers, even pink ones-along with the usual Muppet-y mix of mayhem, music and laughs.”

Disney’s “The Muppets …Again!” takes the entire Muppets gang on a global tour, selling out grand theaters in some of Europe’s most exciting destinations, including Berlin, Madrid and London. But mayhem follows the Muppets overseas, as they find themselves unwittingly entangled in an international crime caper headed by Constantine-the World’s Number One Criminal and a dead ringer for Kermit-and his dastardly sidekick Dominic, aka Number Two, portrayed by Ricky Gervais, creator of “Derek” and the Golden Globe(r)- and Emmy(r)-winning series “The Office” and “Extras.” The film stars Golden Globe-, Emmy- and SAG Award(r)-winning actress and writer Tina Fey (“30 Rock,” “Mean Girls,” “Date Night”) as Nadya, a feisty prison guard, and Emmy Award winner Ty Burrell (TV’s “Modern Family”) as Interpol agent Jean Pierre Napoleon.

Said Kermit the Frog, “This movie takes us places we’ve never been before. And trust me-this frog has never seen so much international flavor. I think audiences will eat it up-the entertainment, that is.”

Featuring a slew of surprising celebrity cameos, Disney’s “The Muppets … Again!” will shoot on location in London and in Hollywood, as well as in the famed Pinewood Studios in Iver Heath, Buckinghamshire, just outside of London. 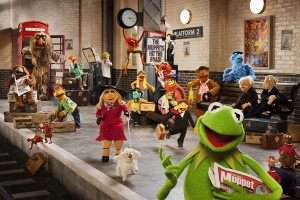 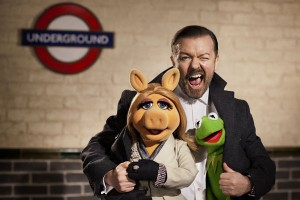 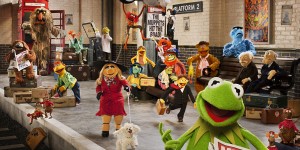