Playdek’s Agricola on iOS Does the Board Game Justice 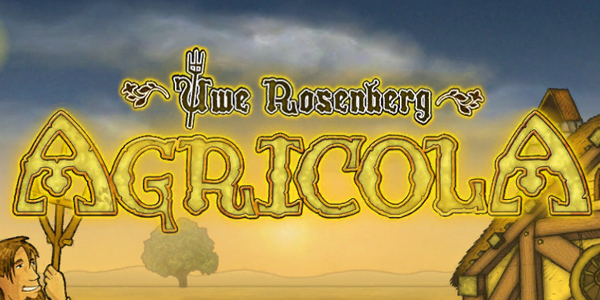 Having already published fantastic mobile versions of such popular tabletop titles as Ascension, Summoner Wars, andNightfall, Playdek’s announcement that they would be bringing Agricola to iOS devices was met with an understandable level of enthusiasm.  Agricola is, after all, widely hailed as one of the greatest board games in existence.  After seemingly endless delays, it’s finally been released and it couldn’t have turned out better. 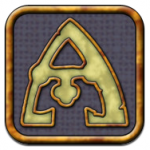 It actually took me a while to give the physical iteration of Agricola a try.  Despite hearing nothing but praise from everyone who had played it, I just couldn’t get past the theme of the game – I mean, how could a game based around working as a poor farmer to plow fields, harvest grain, and feed your family translate into an exciting experience?  Believe me, it does.  Agricola is easily among my top three favorite tabletop games, achieving a perfect balance between any number of players (from 2-5) and allowing little to no room for luck.  It’s a deep strategy game through and through which rewards long-term planning while always offering enough options to give everyone a fair shot.

Fans of the game will immediately recognize and love the unique art style that graces the scrolling title menu.  From here, players are able to customize the speed of the game, browse the full gallery of cards, read the rule book, or begin one of several tutorials (including one geared towards those who are already familiar with how to play the game but just want to learn the app’s interface).  From there, you have the option to start an online game (which expectedly prompts you create an account) or play offline.  Offline modes include both solo variants and the option to play against any combination of up to four opponents all with three levels of selectable AI.  Pass & Play is an option as well, allowing several players to enjoy the game by passing around one device.

Once you decide to play online or off, players will be given several options that appeal to individual preference.  The more simplistic “family game” version may be selected, which streamlines the mechanics for newbies or those looking for lighter fare, as well as the basic game (in which everyone starts with seven randomly drawn “Occupation” and “Minor Improvement” cards), a 10-3 version where ten of each card type is drawn and players are allowed to discard down to seven, and a draft version where one card at a time is chosen from a large hand and passed clockwise, repeating until all players have drawn their seven card limit.  You can even customize the avatars that appear on your family’s tokens before finally beginning the game itself. 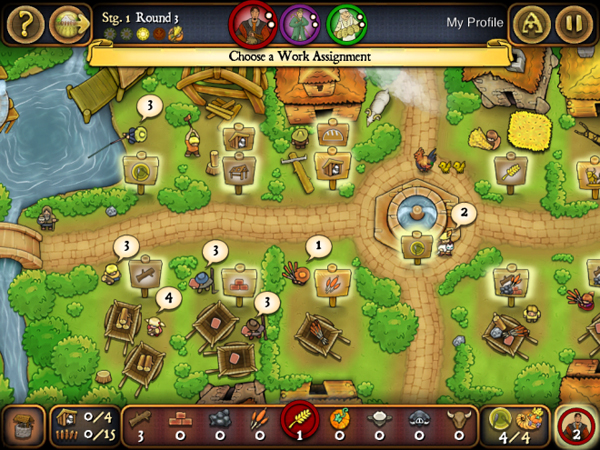 To give a general overview of the mechanics, each player begins with a plot of land, a two-room wooden hut, and two family members.  Beginning with the first player and continuing clockwise, each player gets the opportunity to place a family member on an action space.  There are a set number of these spaces to begin with and more are revealed each round.  These areas may grant players with building materials, food, animals, the ability to gain occupations or build improvements to their farm, renovate their home, plow fields, sow grain, and even expand your family by having a baby.  There are reasons why players will want to perform all of these actions during the course of the game but it’s important to note that each space may only be occupied by one worker each turn.  Part of the strategy is to not only ensure that you are taking the resources and actions you require, but to block the other farmers from what they may need to progress.  Once all players’ have placed all of members of their family on the board, the round ends and everyone goes to their respective homes. 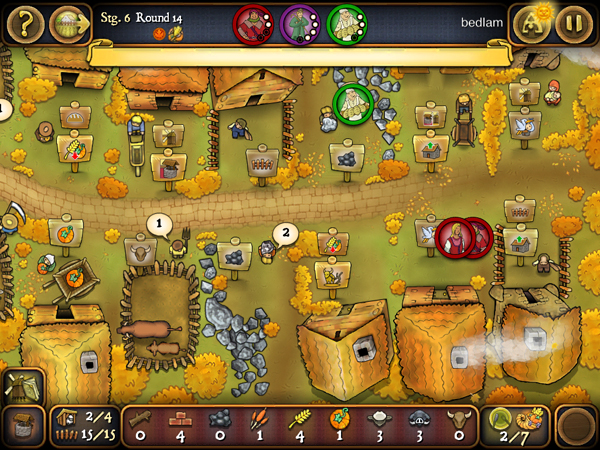 Once a set number of rounds have taken place, it becomes time to harvest.  Each round that ends with a harvest requires each of your family members to be fed with two food tokens.  It also allows you to obtain one grain/vegetable counter from every sowed field and will spawn one baby animal for each animal type which you have two or more of in your farm.  Animals can be a valuable resource, not only because they can be converted into food (assuming you have built an oven improvement in your home) but because they can result in several victory points at the end of the game.  The problem is, you need to build pastures for them to graze in and each fenced in pasture space can hold two animals of one type (four if you also erect a stable there).  Victory points are actually gained in many different ways, from how large or renovated your home is to how much your family has expanded to how many of each resource your farm has at its disposal, but after the final harvest is resolved, the player with the most points is the winner.  While that’s just scratching the surface of the game, it really is quite intuitive and easy to understand once you begin to play it.

So let’s see how the iOS version compares to the board game.  For many people, the sheer amount of pieces present in physical game of Agricola may be an immediate turn off.  There are hundreds of wooden bits representing every animal and resources available and set up/clean-up can be a chore, let alone managing all the pieces in everyone’s inventories while playing.  The iOS experience benefits from its clean presentation in taking care of all the upkeep for you.  Spaces that normally accumulate wood, clay, reed, etc every turn are now automatically filled.  Paying several resources to build something is done with the tap of a finger.  This alone cuts the game time in half.  Besides not having to physically manage the pieces, all the calculations are done for you and the game even goes so far as to let you know what improvements/occupations you have met the prerequisites for or currently have the resources to use.  It’s clear the development team really understood the potential of creating a video game version of this title. 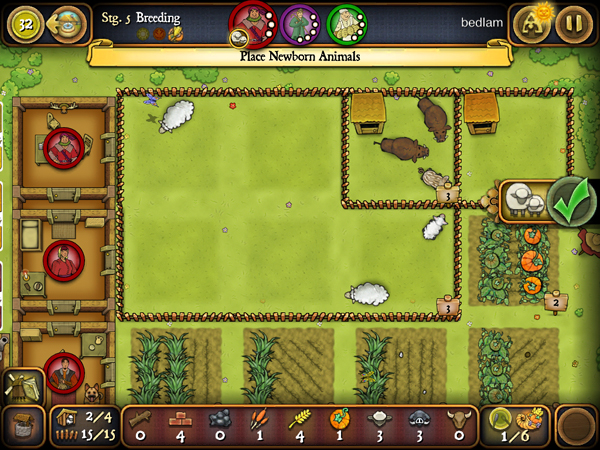 Aside from the ease of use though, Agricola on iOS is a joy to experience for aesthetics alone.  The audio combines immersive barnyard sound effects with a whimsical soundtrack which suits the game perfectly.  While a button allows players to toggle the text on & off that describes what each space does, you’ll notice small details that can’t be conveyed on the tabletop board.  Instead of the static illustrations we’re used to seeing (a fishing space, wood cart, animal pen), the iOS version comes to life with tons of little animations happening while still providing all the necessary info.  Now there are workers seen hauling stone, grazing cows moving about, and people chopping wood to name a few.  Sowing fields will instantly make your crops spring up from the ground and animals will wiggle about when you pick them up to relocate them to another pen. The world of Agricola feels alive and its design is simultaneously adorable and accessible.  While the iPad makes all this much easier on the eyes, the iPhone/iPod version is quite serviceable thanks to the ability to toggle between full screen shots of your farm, the action space board, and your hand of playable cards.  Each of these can be zoomed in on for easier reading as well.  It’s a universal app as well, so it’s nice that multi-device users will only have to pay for the game once.

Really, there’s nothing negative I can say – Playdek has done a superb job with this one.  The game plays flawlessly (I still haven’t encountered any crashes or glitches), the AI is quite decent (and functions waaaay faster than human players), and everything controls just as it should.  Players can even pull up real-time score trackers mid-game to see how their opponents are doing – something that’s extremely astute players may be capable of while playing the board game, but with this makes it far easier and more enjoyable.  If there’s anything I’m disappointed by, it’s the lack of expansions.  Several of the additional decks that have become available for the physical game add a lot of flavor and I consider the Farmers of the Moor expansion to be an integral part of the game at this point, adding a requirement to heat your home during harvests, the need to clear forested areas before building on them, and introducing a fourth animal, horses.  I’m certainly hoping that Farmers of the Moor and the Gamers, Belgium, and Netherlands Decks become available as in-app purchases this year so I can have the full Agricola experience whether I’m on the go or reclined on my couch.  If you haven’t experienced any form of Agricola at this point, downloading this excellent app to your i-device is a great introduction to the pinnacle of tabletop gaming.