Playmates Brings TMNT Back To Their Roots 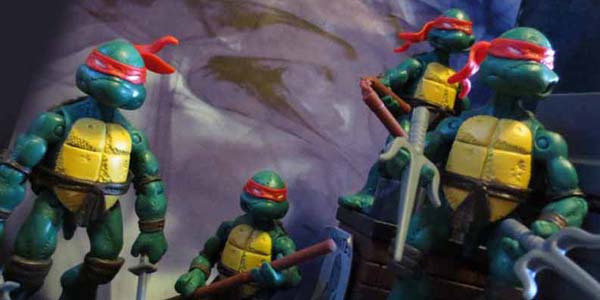 Playmates finally delivers the original Teenage Mutant Ninja Turtles, and they were worth the wait.

This isn’t the first time Playmates has attempted to make toys based on the early 80s Mirage Comics-style Ninja Turtles, but I’m very happy with the end result of this long, winding road toward toy-dom.

Let’s start at the beginning– Playmates launched their first TMNT toy line in the mid-80s, at the formative time in which the heroes on the half shell were first evolving (mutating?) from an indie comic making fun of Frank Miller into a viable merchandise-friendly IP aimed at kids like me.  Those first toys had an aesthetic all their own, never replicated in cartoon, video game or comic form… although eventually the cartoon style would win out, both in the 80s toy line and the various reboots we’ve seen in the decades since.

About ten years ago, NECA landed a partial rights deal for TMNT and produced the first action figures based on the original comic book versions of our four heroes.  The figures were legendary– the sculpts by the Four Horsemen were damn near perfect, the paint work brilliantly mimicked Kevin Eastman’s ink-heavy artwork, and they were loaded with awesome weapons.  A followup series was planned, to roll April O’Neil, The Shredder and a few Foot Soldiers into the assortment, but by that time Playmates had a new Turtles line coming and squashed any future between TMNT and NECA.

It was around that same time that Playmates attempted to launch a collector-oriented Mirage comics toy line, with their own versions of the four Turtles and key supporting characters in their old school comic book styling.  But between the figure sculpts being sorely lackluster, and lots of bad will over the whole NECA debacle, the comic series lost support and never came to fruition. 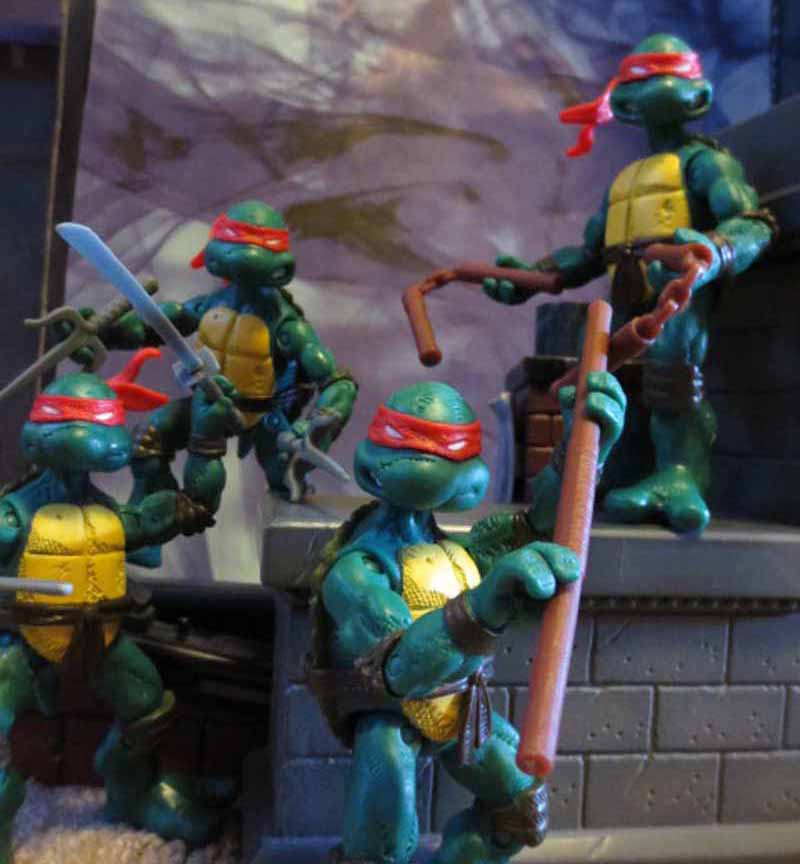 I bring up this history because, in my opinion, it’s important in terms of not only the finally-released Mirage Turtles from Playmates, but how these toymakers have managed to create a new era of goodwill with collectors and kids alike.  There’s no denying TMNT is one of the biggest things to connect with today’s audience– the Nickelodeon show is a smash and the toys are among the few action figures at mass retail that really move (and move FAST).  A lot of the latter is based on Playmates, who have consistently come up with great case packs that refresh actual desired figures alongside a great variety of new ones.

And I love that this is the vehicle by which they released their new Mirage Turtles.  Not as a high-priced collector line… but hidden among the latest wave of mass market figures.  So these all-new, collector-skewing figures can be enjoyed by kids, as well, for less than ten bucks a pop… and can offer some of the history behind the origins of their now-beloved franchise, and maybe even inspire some of them to check out those original comics.  That’s awesome!

As for the figures themselves, I think they’re really solid.  They already have their detractors, and sure– they’re not as breathtaking as the NECA Mirage Turtles– but for a wide release basic figure, they’re solid.  The proportions are great, with their smallish shells and torsos and wide feet and forearms.  The angry faces match the original comic styling perfectly, while offering some variety for each brother (Raphael gets a full grimace, Leonardo’s mouth is closed, and Michelangelo and Donatello each have the vintage half-opened mouth expression).

The sculpts also feature a cool bit of texture, intended to replicate the scratchy ink work of the comics, and I think it works pretty well, especially recessed against the painted yellow shells.  It adds a uniqueness and depth to the figures in a very cool way, and I think the cross hatching on the figures’ green skin would pop just as much, if they received a subtle black wash to highlight it.  As for the colors, overall I really like them.  While the skin on these Turtles is more jade than the lime green of the Mirage covers, it’s certainly different from other versions of the Turtles, and it’s kind of neat to have a set from Playmates where the masks and skin tones are uniform for all four brothers.  The brown pads and yellow and green shells are painted fairly cleanly, with minimal slop on any of the figures I have seen. 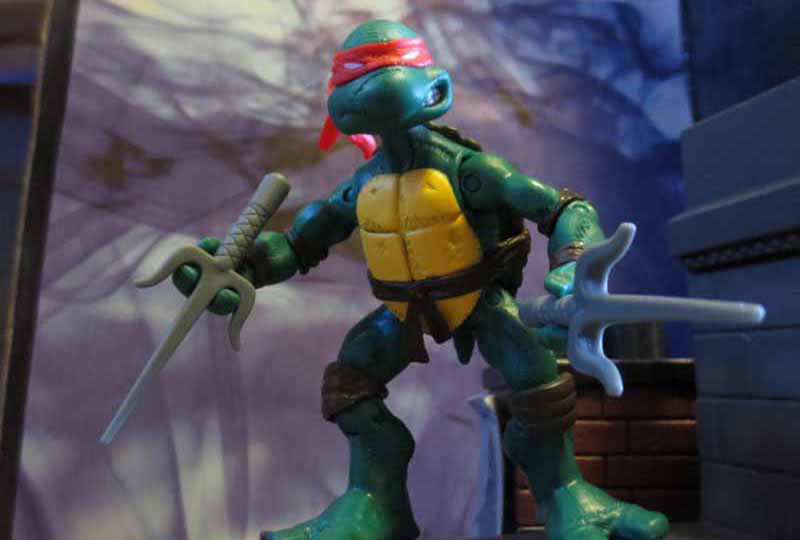 If I had one beef, it’s with the articulation, which is a mixed bag.  On the one hand, the ball necks are fantastic, allowing for a wide range of motion.  The hinged swivel shoulders, elbows, hips, and knees are all serviceable… but that’s all we get.  This means no wrist articulation, which is a huge obstacle in getting these guys into even basic poses holding their weapons.  It’s a bummer, because this one added joint would have allowed you to do so much more with these guys, as would belt storage for their signature weaponry.

Even with a design shortfall as limiting as the lack of wrists turns out to be, I must say the good outweighs the bad on Playmates’ Mirage Turtles by volumes.  It’s exciting to finally have Playmates’ take on the original TMNT realized as action figures, and I’m glad it happened now, because I feel the toymakers’ current design team really does them justice.  More than anything, It’s exciting to me to see these special figures being worked into the basic figure line, in uniquely colored but otherwise uniform packaging.  It’s a great move to open more young fans up to the storied history of the Ninja Turtles, and an excellent service to collectors, who can enjoy these great figures at a very reasonable retail price.

The Mirage Turtles are shipping in the latest assortment of TMNT basic figures, and are showing up now at Wal-Mart stores.  They should hit other retailers en masse in the near future. 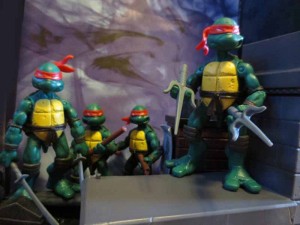 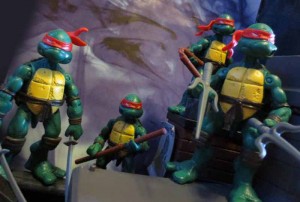 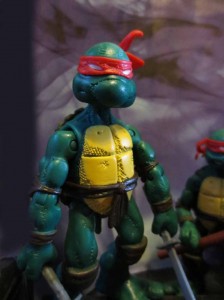 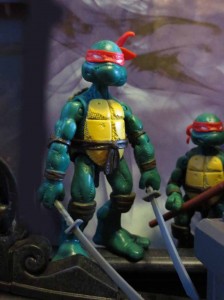 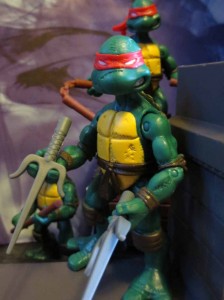 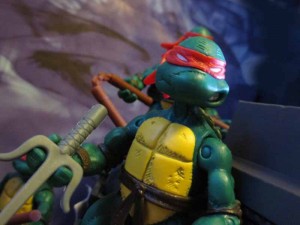 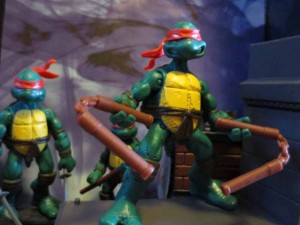 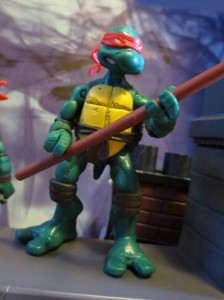 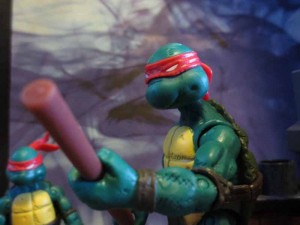 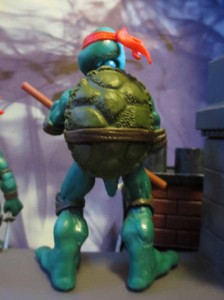 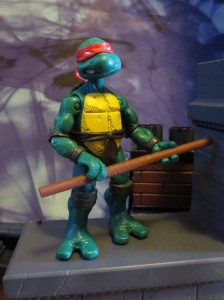 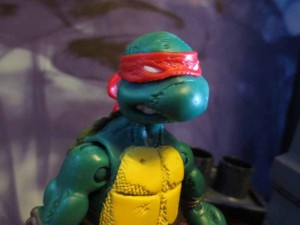 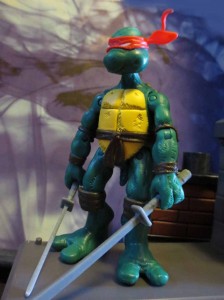 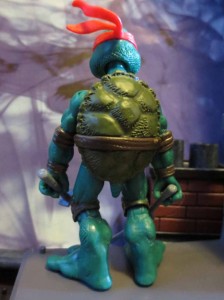 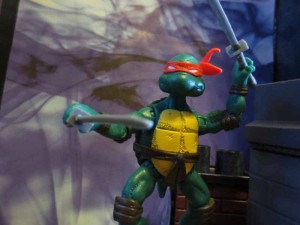 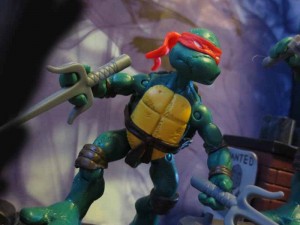 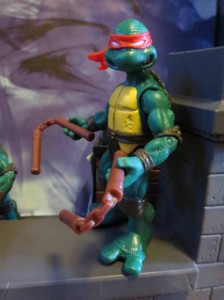 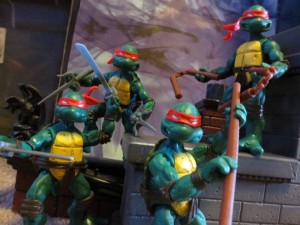 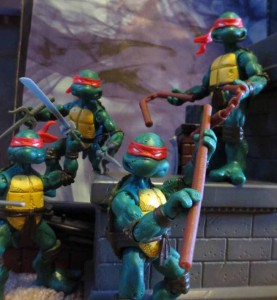 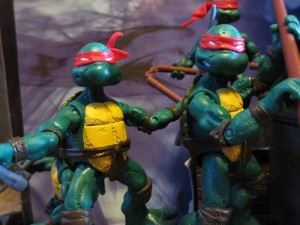 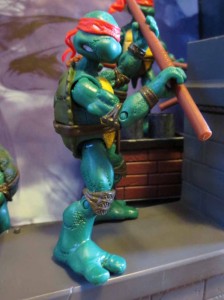 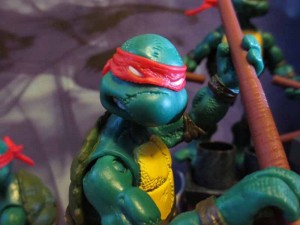 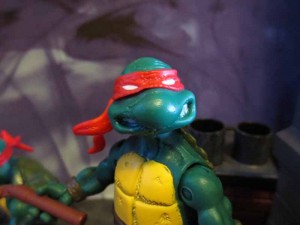 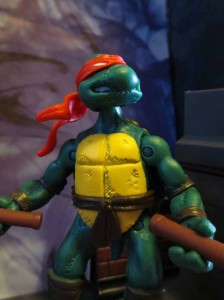 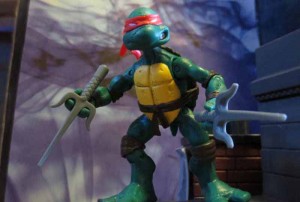 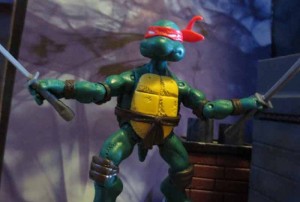 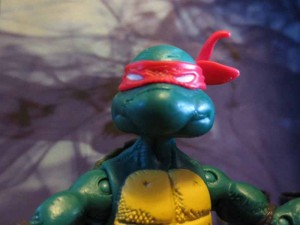