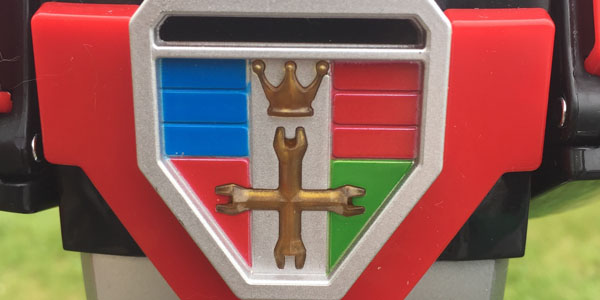 For Year Two of their Voltron collection, Playmates looks to the past with a great 80s inspired combiner.

Well, here’s where the criticism comes in– were it my toy line to manage, I’d augment the release of the modern Voltron’s five combinable Lions with a wave of in-scale monsters for them to fight.  Sure, each beast would demand a unique tool… but if you rotocast them, they’d be more than formidable opponents for the combined 16″ Voltron toy many kids assembled in 2017.

But let’s face it– if a lack of in scale villains for your modern Voltron action figure was the pinnacle of your disappointment last year, you should probably count yourself lucky. And while I’m still missing giant monsters, I do respect that Playmates found another great way to expand on the Voltron collection, with the release of Voltron 84. 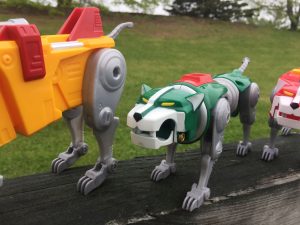 The current Netflix Voltron series is based on the previous 80s version of the franchise, from the cast of pilots, to the general concept of five robot lions which combine to form an epic galactic defender. So it makes sense that Playmates would pay homage to the designs– and lions– of yesteryear in their toy line for 2018. Much like last year’s combinable Volron, the 1984 version features five separate releases– a central Black Lion, and four subordinate Lion limbs– which connect to form a nostalgic version of Voltron himself.

I have to hand it to Playmates, they really nailed it on these toys… even in terms of the individual lions. The four “limbs” each feel like a complete toy, in terms of articulation, accessories, or unique sculpt… and the central Black Lion is augmented by some great audio effects that enhance the toy in some really cool ways, either on its own or when it’s used to combine to form Voltron.

A nostalgia junkie, I am not (I loved The Last Jedi, for what it’s worth), I can’t help but admit that, regardless, I melted as I assembled Playmates’ 84 Voltron. Maybe it’s the agreeable height, at just about 16″ tall… or maybe the vintage design of the robot and the lions that compose it– all perfect renditions of the animated series I watched as a kid– but I immediately fell in love with this toy.

Each fully articulated Lion includes two snap-on weapons, as well as a third armament it can hold in its spring loaded jaws. The primary colors of each robotic creature are perfectly accurate to the pallets seen on the vintage show.  The robotic bits in between are a milky silver plastic, instead of the preferred vac metal finish, but everything else– from the tones to the weaponry– is perfect.

It’s remarkably simple to transform and combine this figure into the giant Volton. Each limb Lion only requires a handful of steps to switch from robot to body part mode, and the included instructions are very easy to follow. Likewise, the connections to the core Black Lion body are quite straightforward and secure, meaning you can connect the figures to form Voltron very easily. Each time you do, the Black Lion launches into a fun stream of connection-centric audio voice and sound effects from the 80s animated series. It’s yet another element that successfully pulled at my more nostalgic heartstrings.

Once combined, Voltron stands well over 14″ tall, towering over the vintage version (even if his soapy grey plastic pales in comparison to the vac metal silver of the 80s toy). In addition to their individual weapons, the Lions also include Voltron’s sword and shield, meaning you can weaponize your robot defender simultaneously, alongside your Lions.

I try very earnestly to judge each toy I review on its own merits, despite whatever nostalgia it triggers in me. I find Playmates’ 1984 Voltron challenges that in a major way, as it’s impossible to divorce this current toy from the 80s analog that so clearly inspired it. And while both the vintage and modern toys have their strong suits, I can’t help but urge any fellow classic Voltron fans to pay attention to this great sub-line of toys. I’m very glad I decided to jump in and assemble Voltron 84. And I think many of you will be, too! 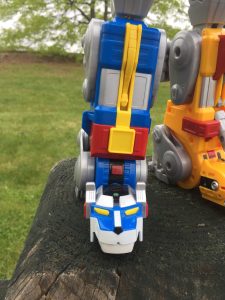 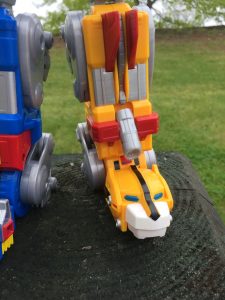 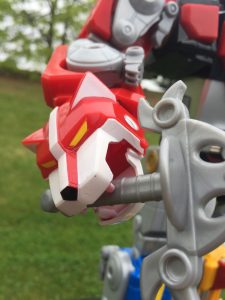 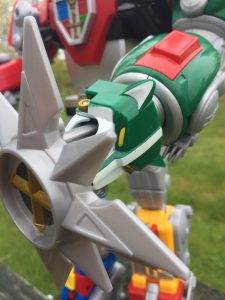 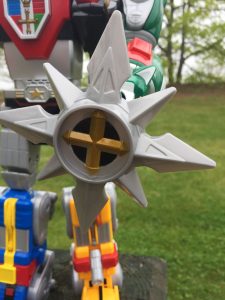 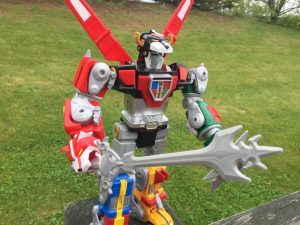 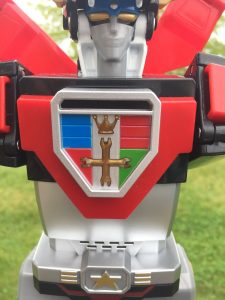 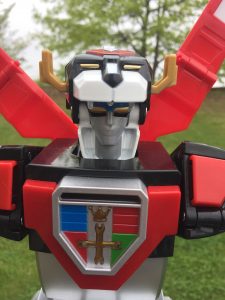 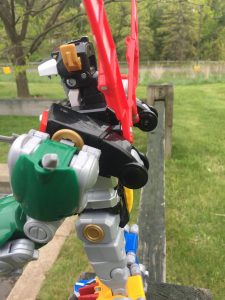 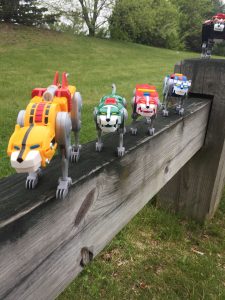 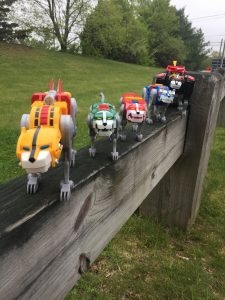 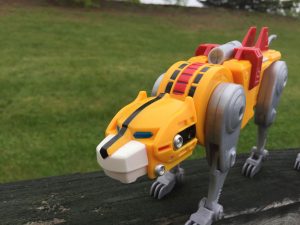 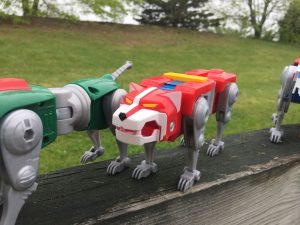 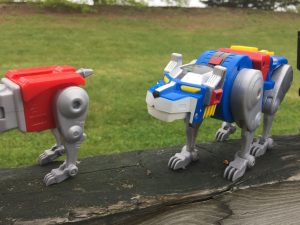 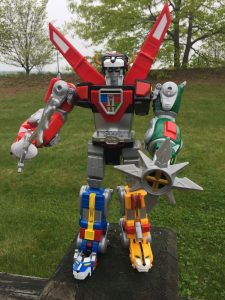 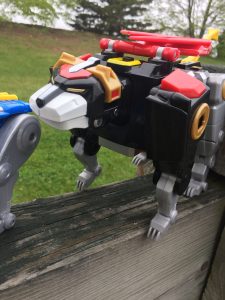 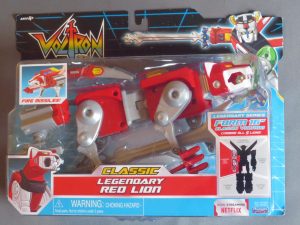 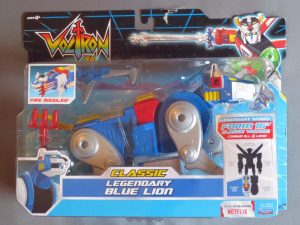 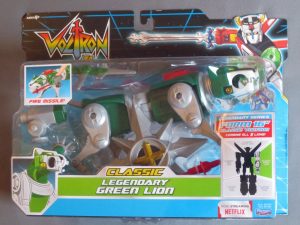 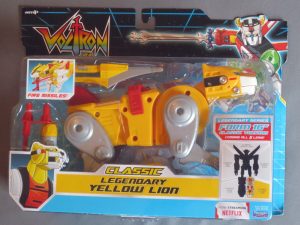 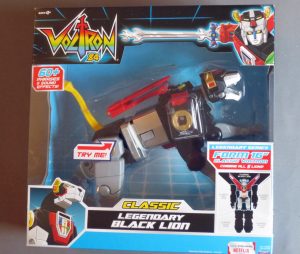 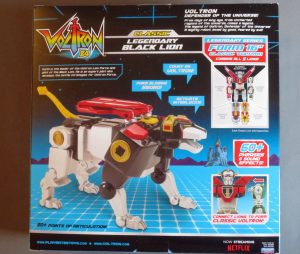 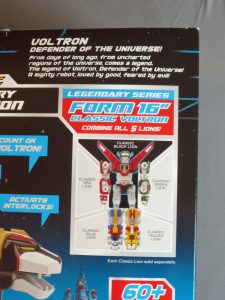 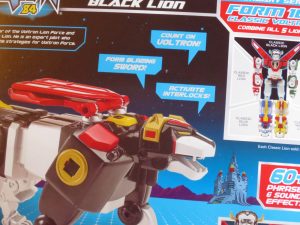