Poison Ivy is one of the last major Batman villains to appear in Mattel’s DC Universe collection, but the plant-based eco-terrorist makes her debut as the October figure in the Club Infinite Earths series.

Pamela Isley was long overdue to get the toy treatment in Mattel’s expansive and long-lasting DC Universe Classics.  It’s a bit surprising the Bat-villain wasn’t held for the Batman Unlimited retail series, but it made sense that a major fan-demand like Ivy be used to anchor the Matty Collector subscription series.  In any event, she was well worth the wait, as Poison Ivy is one of the better females– and figures– in Mattel’s line. 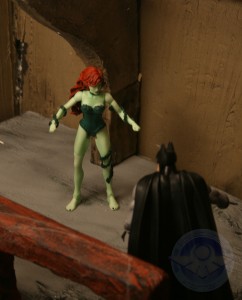 I was a big fan of Jim Lee’s redesign of Ivy, and that style serves as the base of this figure, with Pam’s pale green skin and leaf-adorned bodysuit standing out in a striking contrast against her crimson red hair.  Female faces aren’t always the strong suit of the Four Horsemen, but Ivy’s portrait is very well sculpted, with a determined scowl that works well for the driven eco-terrorist.

There’s a multitude of greens on display in this figure, and I really like the pale green of her skin, with an excellent wash that adds a dimensionality to her.  The deeper green of her costume compliments the pale skin perfectly, and coordinates well with other tones on Pam’s eyes, lips and toenails.  To avoid the limbs getting too monotone, due to the simplicity of Ivy’s one-piece suit, the figure includes some winding vines that wrap around both arms and one leg.  These pieces are wonderfully sculpted, and not only add some variety to her monochromatic skin but serve to mask some of her articulation as well.

Ivy features a lot of new tooling, but retails the most recent version of the DC female buck’s articulation, with the half-ball ab crunch like Star Sapphire. The new joint doesn’t get as much range as the old hinge joint, but it interrupts her sculpt much less, and doesn’t throw off her proportions (older DC females tend to be way too skinny when you look at them from the side). Past that, Isley features all the joints you’d expect, with a decent up-and-down range on her ball neck, and decent hips that move well without taking away from the figure’s aesthetic.

Poison Ivy was used as one of the big selling points, to get the Infinite Earths subscription off the ground. I’m happy to say she turned out well enough to justify that lofty goal; there have been some great figures in the sub thus far, but Poison Ivy may just be the highlight of the whole set.  And with Ivy finally added to the DCU collection, we’re really only down to Ra’s al Ghul as major Bat-villains that need their devil’s due in Mattel’s collection.  I’m still hoping to see him show up in next year’s subscription, or Batman unlimited. 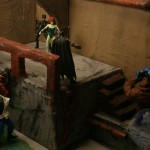 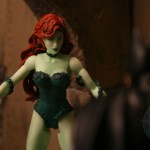 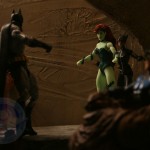 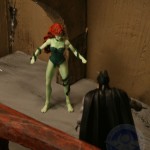