Poll: Which Karate Kid Toys Will You Buy? 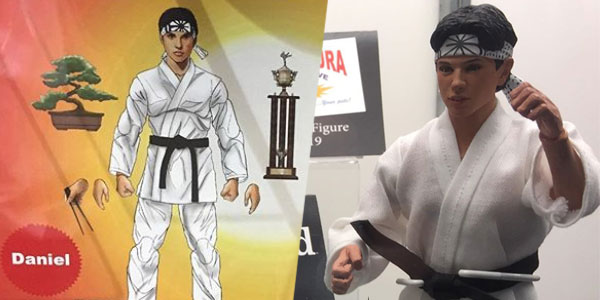 NECA and Icon Heroes are both unleashing Karate Kid action figures in 2019… which line are you most excited for?

Aside from a handful of ReAction figures a couple years back, there haven’t been any toys based on The Karate Kid since the late 80s. Which is why it was both exciting and quite odd that San Diego Comic Con saw the debut of not one but TWO action figure lines based on the classic movie. Icon Heroes teased a pair of 6″ super articulated figures of Daniel and Johnny, slated for late 2019 release. While we only had illustrations to go off of, the figures seem to sport a good amount of moving pieces and some relevant accessories like an alternate chopsticks hand for Daniel-san.

NECA, meanwhile, added Karate Kid to their 8″ clothed action figure lineup. Inspired by vintage Mego dolls but with improved articulation, better engineering, and vastly superior sculpts, this quasi-retro toy line seems to me like a perfect home for an 80s staple such as Karate Kid.  NECA also wins points for showing off more figures– they’ve got Daniel, Mr. Miyagi, Johnny in his Cobra Kai gi, and another Johnny in his skeleton Halloween costume– as well as even more cool accessories for them.

I’m not gonna lie, I’ll always be partial to NECA, myself. But we wanted to pose the question to all of you. Now that we’re seeing a wealth of options for the potential Karate Kid toy collector, where will you be spending your money?

POLL: With NECA – N.E.C.A and Icon Heroes both debuting Karate Kid action figures, which toys are you most excited for?