POW!! AWK! Batman and Villains are Finally in Fans’ Hands 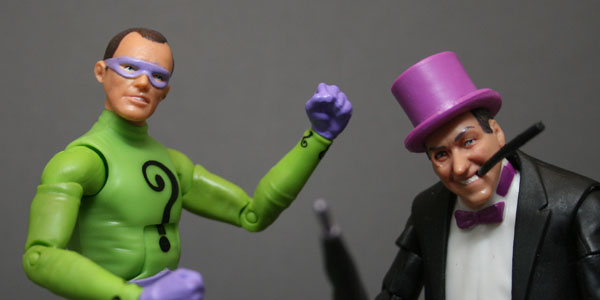 For the last 57 years fans of the Adam West Batman series have been left without toys representing the characters from the show, until now. Mattel has finally gotten the rights to the actors, and the toys are just starting to make it out to the public. 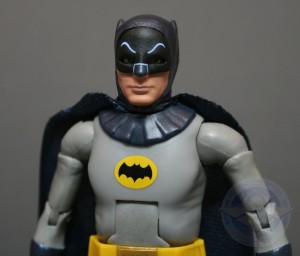 Wave one of the figures includes two villains and our hero. Each of the figures come with figure stands and a collectible card. Each stand is the same size and shape, but have a unique saying on stickers. Each of the cards has a painted portrait of the character from the show, and on the reverse a portion of an image, which when all the cards are collected will make giant image of the Batcave. As a person who only wants the original characters and has no use for the surfing Batman, it was a good move by Mattel. I want to complete the puzzle, but not sure I want to spend the money on the extra Batman sure to end up on my page eBay. The biggest issue with these figures is the clear lack of scale. There are minimal shared parts, so I’m not sure why it was approved to let them all be the same size. West is 6’2”, Gorshin 5’10”, and Meredith 5’5”, yet they can all stand shoulder to shoulder in plastic form. Hopefully we will hear back from Scott Neitlich about the issue, and I hope we get an answer other than it was approved by our licensing so we did it.

The Riddler is based on actor Frank Gorshin and is pretty close to the actors real looks. Though the character was played by John Aston also, this is the most iconic look for the character from the show. He is decked out in his green and purple suit, with minimal question marks on his wrist, legs and a giant one on his chest. The figure has a good deal of articulation, and can be posed to go a few rounds with Batman with his two closed fists. 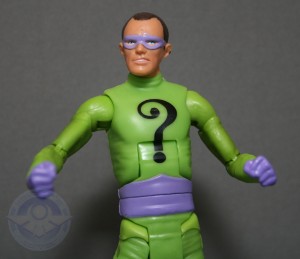 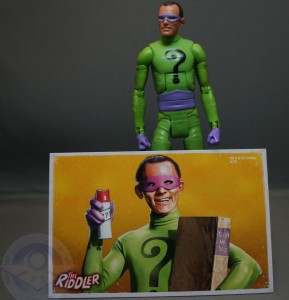 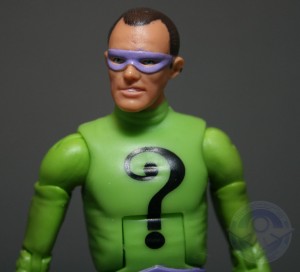 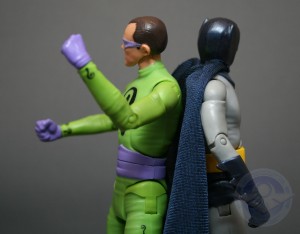 The Penguin brings Burgess Meredith’s character to life. In a world where people are always worried about image it was a refreshing change to see the figure with the cigarette. It was important to the character on the show, in fact it is the reason for the signature Awk sound. Meredith would cough from the smoke and he turned it into the character’s signature sound. He also come with his umbrella, but it is made from very soft plastic so after taking the figure out of the package this is what the handle looks like. The monocle is the one thing that just looks awkward on the figure, it is sculpted on but look like he just has a droopy eye. 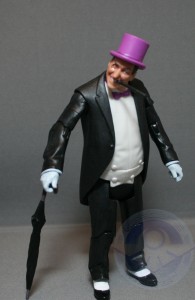 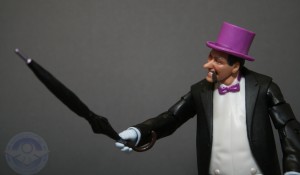 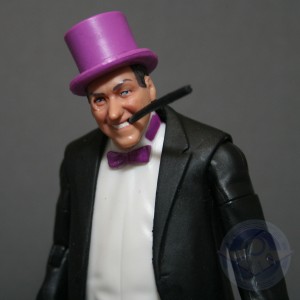 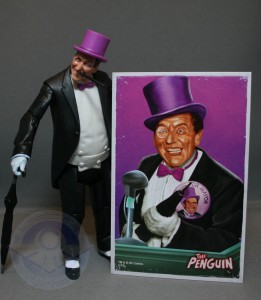 Batman rounds out wave one of the figures and is by far the best of the bunch. He is barrel chested, with a little smirk on his face capturing Adam West’s Batman perfectly. The plastic on his elbow and knees are slightly soft so the pack has caused some warping, but nothing a little heat can’t fix. He does not have any accessories, and the soft goods cape makes up for it. Many fans wanted a solid cape, but he needs to be able to sit in his car, and hang down if scaling a wall. The head sculpt is one of the best I have seen in recent years in a mass retail line. 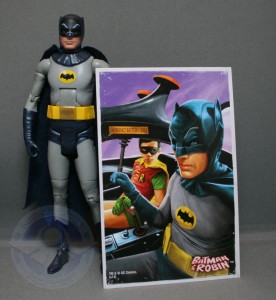 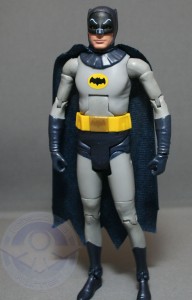 Overall this is one of my favorite line of the year, because it brings back so many childhood memories. I wish Mattel had allowed it to have a longer life, but they are cutting the line off after 2 short waves. These are sure to be a hard to find set because of the generations of collectors looking to pick these up so head over to our sponsor Mike’s Comics-n-Stuff to get your set today.