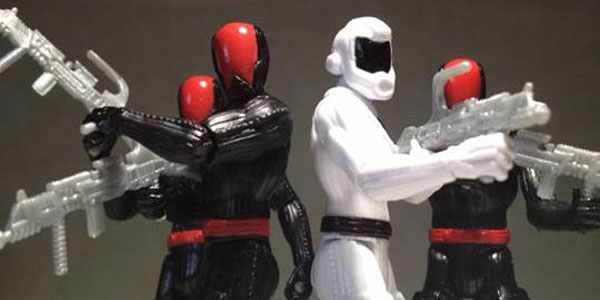 A hot toy sells out.  The toymakers takwe the time to thank their fans, and address the lightning fast sell out, making their intentions known to get the products to everyone who wants them.  It’s totally logical and simple, but a completely revolutionary attitude for the Four Horsemen to take.

UPDATE: The Four Horsemen have already revealed their plans to take preorders for a second run of both Power-Con Power Soldiers!  The preorder will run for 72 hours only, starting this Thursday September 19th.  Here’s all the details:

As you may know, the recent releases of our Power Lords: Power Soldiers and Elite Power Soldiers were far more popular than we were expecting and not only did the allotted amount of 250 pieces sell out at the 2013 Power Con in less than 40 minutes, but the 250 pieces that we had set aside to sell on Store Horsemen sold out in less than 4 minutes. Needless to say we were stunned and had a tough time managing the traffic that hammered our online store in that few minutes. So much so that we had accidentally taken orders for over than 200 more pieces before we had the chance to put all orders on hold to check the order amounts versus the amount we were actually going to have in stock. Even then we realized that there were MANY other fans that still wanted to get their hands on these figures, but for one reason or another weren’t able to.

We always want fans who want our toys to be able to get them if we can help it. This time we can…

We’re going to put these figures back up for pre-order for those of you that missed out, and you’ll have 72 hours beginning Thursday, September 19th at 3:00pm to place your pre-orders. We’ll then run however many orders for each figure that we get during that time period. Once the sale ends, the ability to get those two figures ends. These figures will have stickers on the outsides of their poly-bags which will be numbered #251 and up (the figures that have sold so far are numbered 1 to 250) and will be placed into orders randomly.

We’ve been told by factory representatives that we can have this new pre-ordered run of Power Soldiers & Elite Power Soldiers in our warehouse by mid-November. As soon as we receive them, we’ll immediately begin processing them and shipping them out to customers.

For those of you who have already placed an order through Store Horsemen – some of you were able to order successfully and you were able to purchase one of the 250 pieces that were available. You’ll know who you are when your account is charged later today or tomorrow. For those of you that were able to mistakenly place orders after we’d sold out of our original stock, your orders will still be honored and your account will be charged, but you’ll also receive an email stating that your order will be put on hold, has now become a pre-order and that the figures will ship out to you as soon as they arrive in our studio warehouse. If you’d rather not wait to receive your figures, we’d understand and we’ll be glad to cancel your pre-order and refund your money if you request for us to do so.

-FOUR HORSEMEN-
—
The surprise hit of Power-Con, the Four Horsemen’s first Power Lords figures sold out at the show and online in minutes. And the Horsemen have already commented, to show their appreciation, and a promise to try to get these figures into as many collectors’ hands as possible:

The one thing we NEVER want to do is to leave fans out who want the toys we make. We always make available on Store Horsemen any exclusives that we sell at conventions to make sure everyone has a chance to get them. This being said, we VASTLY underestimated the popularity of the Power Lords: Power Soldiers figures and although we do feel bad that the exclusivity of the figures that people have been able to purchase might be some of the draw, that’s not what truly matters to us. We’re fans as well so we know how disappointing something like a quick sell-out can be. In this spirit we’re going to look into ways of getting these figures into the hands of everyone who wants them. We’ll have an announcement about it sometime tomorrow (Tuesday). Thanks for your TREMENDOUS support. We truly are choked up about the amazing results of these sales the past couple days and we really can’t thank all of you enough. But we’re gonna try…

Some people doubt that the Horsemen will actually go forward with a second edition of the two Power Soldier exclusives, but I honestly think they will.  There’s a lot of factors that play into producing a second run of a toy, but it’s much more feasible for a small outlet like Four Horsemen Studios.

And let’s be honest– the Horsemen have a reputation as being fans first, which is one of the many reasons we all love them so much.  They are aware of the frustration and anger of an instant sell out as well as we are, having been through– and heard about– every situation like this that has come up through Mattel and their history of Digital River sell outs and other annoyances.

Now is the Horsemen’s chance to do what they could never do through Matty Collector– increase supply to meet their demand, keep their fans happy and make more money in the process, without lame corporate interference from a mega-sized business like Mattel getting in their way.

We don’t know exactly how the Horsemen will answer this call, but I have total faith that they’ll do right by their fans, and follow through on their promise to make these awesome looking figures available to all the collectors who want them.