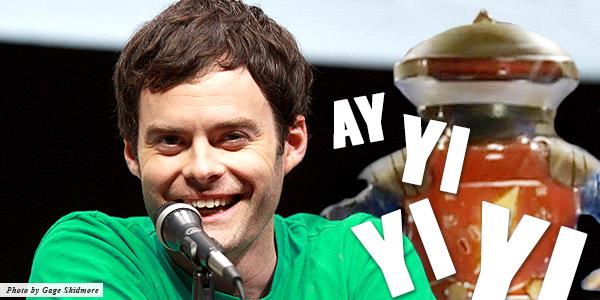 Looks like the Power Ranger’s reboot news just keeps on coming.  After officially releasing the character posters prior to the movie’s appearance at the New York City Comic Con in October.

Bill Hader is a three time Emmy award winner and alumni of the Mid- 2000’s era of Saturday Night Live where he worked as both a cast member and writer, cultivating many beloved characters including the very well known Weekend Update guest Stefon.  He’s also a recurring guest and current cast member of the series South Park.  He’s had starring roles in numerous comedies and dramas such as Trainwreck and the Skeleton Twins and has lent his voice to animated movies like Inside Out, Cloudy With a Chance of Meatballs, and Sausage Party.  He’s a well seasoned comedy veteran for film and TV, and is more than capable of taking the reins up from the original Alpha 5, Richard Steven Horvitz (The Grim Adventures of Billy & Mandy, Invader Zim, and The Angry Beavers.)

Hader’s castmate Elizabeth Banks has expressed total confidence with the decision, stating on her own twitter account:

THIS GUY! #Alpha5 to be played by a great American in #PowerRangerMovie https://t.co/bNouC3XDqt

Hader joins an already outstanding cast besides Banks including Bryan Cranston, with the rangers themselves being played by newcomers RJ Cyler, Ludi Lin, Naomi Scott, Dacre Montgomery, and Becky Gomez.  The film is directed by Dean Israelite off of the script by John Gatins and Ashley Miller.