Will Preacher Be The Next Must-See Show On AMC? 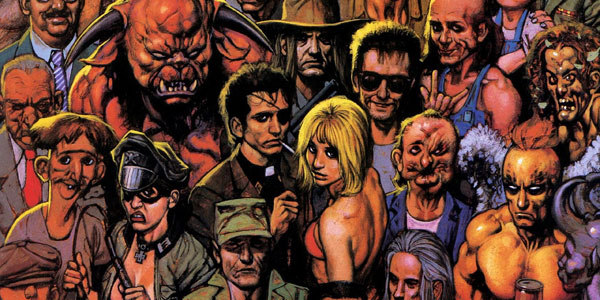 Badass Digest is reporting that AMC is taking Preacher to pilot.  The Vertigo series has been in various stages of developmental hell since the late 90s, but if this news is true, a pilot for a TV series is the closest the project has ever come to reality.

The Vertigo series, in case you didn’t know, is Garth Ennis’ religion and Western opus centering on preacher Jesse Custer, who is possessed by the spawn of an angel and a demon, which grants him powers including the word of God, a command no force on Earth can counter.  Custer hits the road on the trail of a God who has abandoned Earth alongside his ex-girlfriend, turned assassin Tulip and a century-old Irish vampire named Cassidy.

If you’ve never read Preacher, I highly recommend it– it’s a sprawling story that’s equal parts hilarious, brutal and pointedly secular, and it earns its name as one of Vertigo’s all time best books.  We’ve come close to a movie version of Custer’s adventures a few times, but I always felt TV would serve the story best, so if this pilot goes to series, we could be a looking at the perfect venue for the story.

As for AMC, it’s no small surprise they would look to the comic world after the success of The Walking Dead, but Preacher could easily surpass the zombie show as the go-to must-watch series for the network, which they desperately need after Breaking Bad and with Mad Men about to come to a close as well.

I know I’m excited by this news– Preacher seems destined to make the jump to some other medium eventually, and AMC would likely not shy away from the controversial religious themes of the story, in their attempt to get a new buzz-worthy TV show to promote.  It’s early, so this pilot could go nowhere (if it’s even legit– AMC has yet to comment), and some of the past adaptations have been incredibly awful, robbing the overall story of everything that made it such a good read.  But there’s a chance this thing could happen, and there’s a chance it will be good.  And until I’m proven wrong, I’m saying that’s good news!