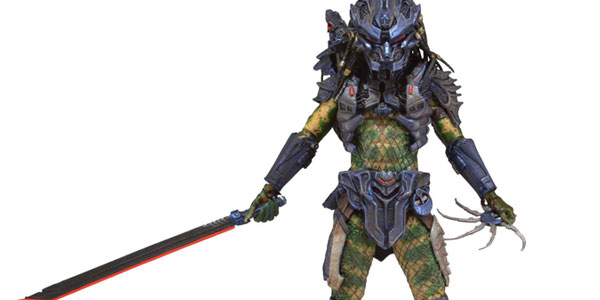 NECA offers up some new images– and a release date– for their latest Predator figures.

I could not be more impressed with NECA’s Predator collection.  It’s one of their top selling toy lines, and rightfully so– the craftsmanship on display in these figures is uncanny, and the toymakers continue to impress with how inventive they’re getting in delving into the source material.  It was cool enough to get perfect renditions of both movie Predators… then we got the Lost Tribe from the end of Predator 2, followed by the incredible Dutch figures… and now we’re getting to the REALLY fun stuff!

Series 10, as we all know, will be the first “Kenner Collection” subset, offering modern updates to three of the goofy concepts from the 90s Predator toy line.  After that, we’re getting a series that’s a little more all over the place (sourced from both movies and the Dead End fan film), but all three look like absolute winners.

The Wasp is the third Dead End Predator, another visually unique creature with a super keen Xenomorph head on his spear, which only adds to the awesome value.  We also get a second version of the Lost Predator, in his concept mask and armor, really earning his nickname as the “Borg Predator.”  And rounding out the set is the amazing Thermal Vision Dutch, another take on the movie hero, this time in a colorway that brilliantly replicates his heat signature as seen by the Predator (and on VHS box art everywhere).

The best news, though, is we’re getting this wave a little ahead of schedule.  Usually the Predator figures hit every three to four months, but NECA’s plan is to have these guys out in November, about two months after the Kenner figures.

Here’s all the details straight from NECA, along with some new images of the upcoming series:

The 11th Series in our #1 selling line of Predators action figures brings new Predators to the hunt!

Appearing for the first time ever as an action figure, the Wasp Predator comes from the classic fan film Dead End and includes an amazing new accessory – a staff with an Alien head impaled on the end.

Up next is an Armored Combat version of the Lost Predator from Predator 2‘s Lost Tribe. This new take on the very popular Lost Predator features a brand new mask, backpack, armor and weaponry that fit with his tech look.

The third figure in this new assortment was one of the most talked about figures at SDCC 2013: Thermal Vision Dutch! This special version of Dutch authentically replicates how the Predator sees him using his heat vision. The figure is cast in translucent green and is painted with “hot spots” of yellow and red. Comes complete with rifle, pistol, and knife accessories. 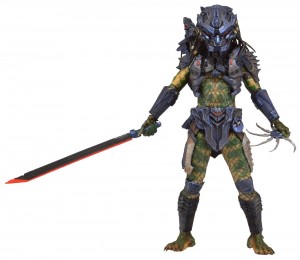 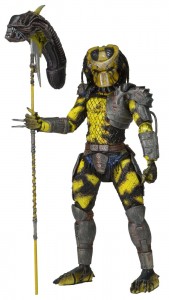 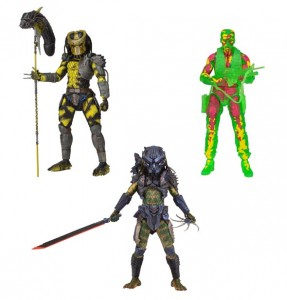