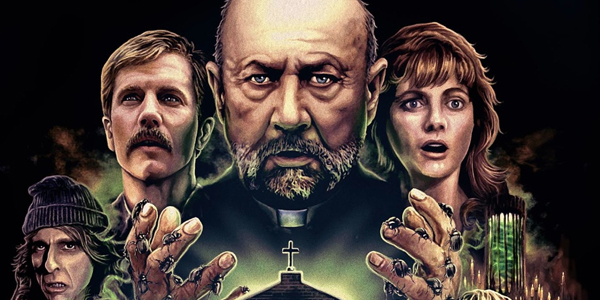 Shout! Factory’s horror-focused imprint, Scream Factory, has given a long-overdue blu-ray treatment to John Carpenter’sPrince of Darkness.  Featuring a pristine transfer, excellent audio options, and a ton of bonus features that are actually worth watching, this collector’s edition disc is a fan’s dream (or nightmare?) come true. 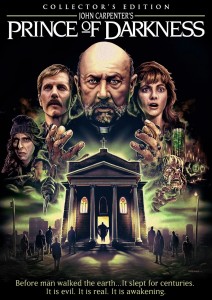 Starring the inimitable Donald Pleasence (of Halloween fame) as Father Loomis, the over-the-top, ridiculous plot Carpenter cooked up is really what makes the film memorable – but the fact that he managed to execute it as well as he did is what makes it great.  The belongings of a recently deceased priest prompts Loomis to investigate an abandoned Los Angeles church and the contents within.  Enlisting the help of a team of graduate students and a physics professor, they discover ancient texts that reveal horrifying revelations and a mysterious container, millions of years old, that houses the son of Satan…in liquid form.  This demonic goo systematically infects the group as Satan himself prepares to crossover to the living world.  As crazy as it sounds though, Carpenter spins it into a thought-provoking, interesting tale that manages to hold up as a genuinely creepy film.

Even though it may be considered one of the lesser known works in the director’s canon, Shout! Factory didn’t skimp one bit with the transfer, delivering an outstanding representation of the film.  The AVC encoded 1080p transfer in 2:35:1 looks better than anyone probably remembers, with rich blacks, nicely saturated colors, fine detail, and virtually no instances of dirt, scratches, or noise.  As with the new Scream Factory release of the Amityville Horror trilogy, purists will be thrilled that the original 2.0 audio mix is intact on the disc.  While I love that this is included though, I can’t help but prefer the new DTS-HD mix in 5.1, which features some great immersive surround work and much-improved bass response, taking Alan Howarth’s killer score to new levels.  Prince of Darkness has never looked or sounded anywhere near this good.  Although the packaging may not matter to some people, I have to admit that I’m a total sucker for a well-presented insert/case when it comes to my DVD/blu-ray collection, so I was pleasantly surprised to see that they worked in a reversible insert, letting collector’s choose which side to display.  The cover that faces out by default matches the cardboard slipcase artwork – a newly commissioned painting that looks unbelievably cool.  If the original movie poster artwork is more your thing however, Shout! Factory has you covered; just flip over the insert for that old-school aesthetic.

Last but not least, the disc is loaded with meaty extra features (all in HD) aimed squarely at fans of the film.  You get audio commentary and an interview with Carpenter himself, a new interview with Alice Cooper (who stars in the film), a new interview with actor/special effects supervisor Robert Grasmere, a look at the film’s score with co-composer Alan Howarth, a featurette with Sean Clark, an alternate opening to the movie, and the original trailer.  Kudos to Scream Factory for giving this unique gem of the horror genre a fitting release — If you have not yet seen Prince of Darkness, this is the perfect time of year to give it a watch…just make sure you do so with this clearly superior version.