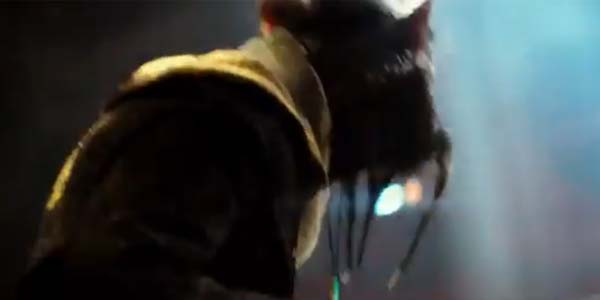 Here is Splinter, as seen in Michael Bay’s TMNT movie.

I honestly haven’t been following the un-inspiring Michael Bay-backed Teenage Mutant Ninja Turtles movie too closely, but I believe this latest TV spot may be the first time we have seen Splinter– the mutant rat sensei of our heroes– as he will appear in the new film.

He looks like a cross between how Splinter should, and Trevor Slattery from Iron-Man Three, which I guess is just about right for the overly busy Bay aesthetic– he’s Splinter with a top knot and Fu Manchu mustache glued on top of him.

Maybe we’ve seen him before, I don’t know for sure nor care to research it right now, but I can say with a little more certainty this is the first time we’re hearing how Splinter will sound in the movie, as voiced by recent TMNT recruit Tony Shalhoub.

What I can say with absolute certainty is I am already sick to death of that slow-mo Transformers scene of one of the Turtles being launched upside down and smashing into a van.  That seems to be one of those trailer-happy “money shots” that was annoying the first time I saw it, but which will be laughably played out to everyone by the time the movie hits in August.

Maybe I’m wrong– for all I know, there is some relevant, character-driven meaning behind this fully CGI stunt, one that will make sense in the context of the story?  Perhaps there will be a reason as to why that Turtle will only get launched shell-first into a vehicle upside down?  Or a motive behind his horrifying, vacant smile while doing so?  Somehow I doubt it.