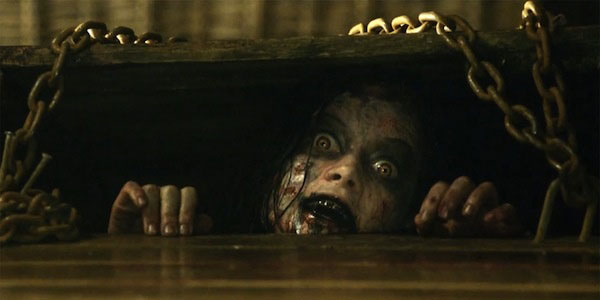 The buzzed-about remake scored its NC-17, and has opted to re-cut to an R.  That may seem disappointing for gorehounds like me, but this does not shake my trust in the folks behind this movie.

Everything we’ve seen so far for the Evil Dead remake suggested they were shooting for an NC-17 rating.  From the gonzo gory trailers, to the hyperbolic posters, all this movie has been selling is balls-to-the-wall intense horror.  They got their wish, as Bloody Disgusting reports the MPAA slapped them with their NC-17 for the current cut of the film, which director Fede Alvarez mentioned with pride.

“Was proud of scoring a NC17 when submitted!” he said.  “But we had to cut stuff out to get an R and get the film into theaters.”

This recut to dial the film down to an R has some people worried it won’t be the opus of gore and brutality the trailers have suggested, but I don’t buy that.  For Alvarez and producers Bruce Campbell and Sam Raimi, the NC-17 thing is a badge of honor, and a shrewd strategy for dealing with the MPAA.  Campbell said as much when I spoke to him at New York Comic Con, and he had plenty of fight in his swagger.  He left me fully convinced that not only would he and his cohorts torturously nickel and dime the MPAA frame by frame until they whittled down to their R, but they’d do so with glee, knowing they were making the life of someone at the ratings board miserable.

This NC-17 thing is all part of their game, and I’m equally sure the final theatrical cut of Evil Dead will be plenty intense and graphic.  If the creators went in with a legit R cut, the MPAA would still likely knock them back to soften it up, especially in light of the the rocky past between the board and the first two (unrated) ED movies.  By going in knowing they’re way over the line, they’re likely buying themselves some wriggle room to get away with more than they would otherwise.  It’s the same kind of old school movie hucksterism that has made this remake’s marketing so charming; it’s smart and it only adds to my adoration of all these talented tricksters working behind the scenes.

In short, don’t worry– I’m confident that tongue-bisecting scene from the trailers isn’t going anywhere.  It will likely just be 1/16th of a second shorter.