Smash Your Way to Victory in Rampage 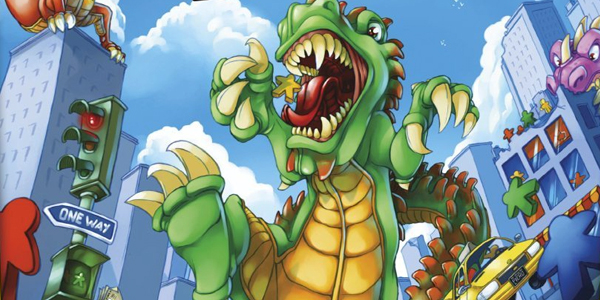 From designers Antoine Bauza & Ludovic Maublanc and published by Repos Production & Asmodee, Rampage finally hits U.S. shelves after a monstrous showing at GenCon.  Much like the 1986 arcade classic by the same name, the game involves controlling a large monster that is laying waste to all the buildings in a city, devouring lots of delicious humans along the way.  It’s also likely to be one of the best tabletop gaming experiences you’ve had this year. 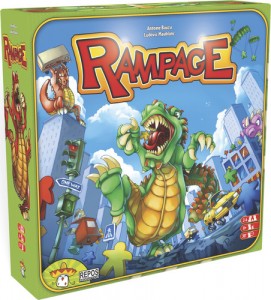 Rampage is a dexterity game with an extremely simple ruleset, making it easy to teach and be enjoyed by gamers of any age – and I say this because, at first glance, I nearly wrote the title off as children’s fare.  I’m truly glad I gave it a chance though, as I would have missed out on having a ton of fun.  So first, let’s take a look at how the game is set up.  When you first unpack the components, you’ll find that the game board is divided into two separate pieces and a number of areas instruct you to paste items onto them.  These areas are the fountains of buildings (or the ruins of buildings when they are inevitably demolished during play) and are permanently adhered to the game board.  Both sections of the board are held together by a large, central foundation and the seam is held together tight with supplied plastic clips to keep them flush.

On top of each of these foundations, one of the 90 supplied wooden meeples is drawn and placed randomly in each corner (with even more allocated to the larger central area).  Then a thick cardboard “floor” tile is placed on top of them which, in turn, also gets meeples placed on it.  This is repeated until all the buildings have three levels, with one additional meeple located on the roof.  The center tile is only one level high and resembles a football stadium, which has the remaining four meeples placed on it.  Then the fun begins as players place their monsters on one of the boards starting positions.  Each monster’s body is constructed from lightweight wood with stickers to affix onto each side while their paws/feet are located on a separate wooden disc which the body rests on, forming the whole creature.  In addition, each player is also given a character, power, and secret power card, as well as a player screen and four “breakable” teeth, but we’ll get to those in a bit. 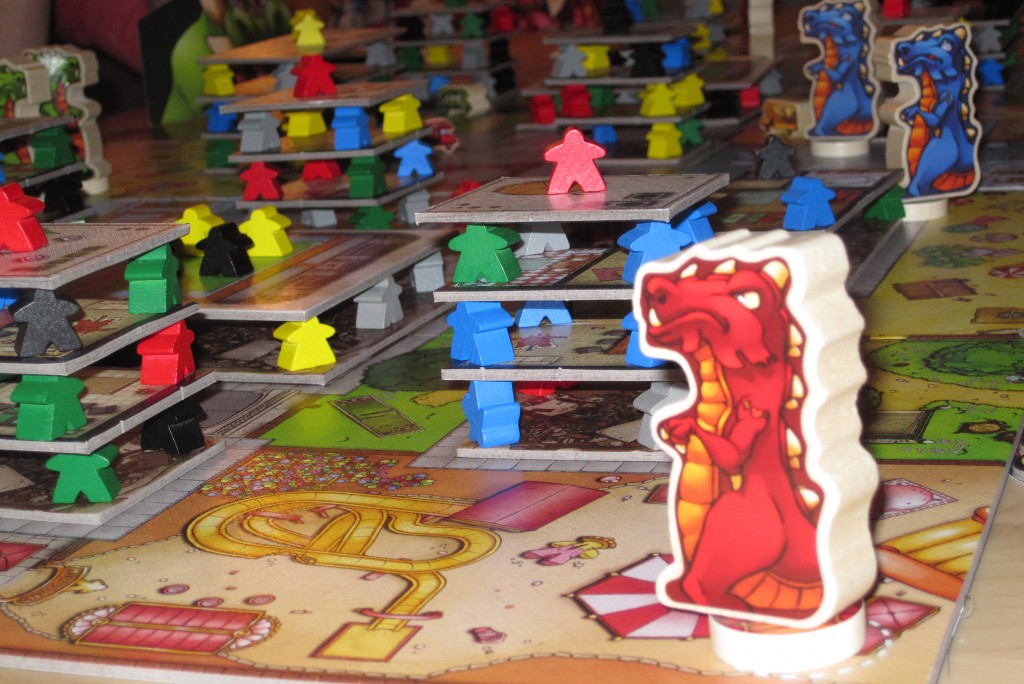 So after placing the monsters on the board, each player may, in clockwise order, take two of four actions with their monster.  These actions include moving, demolishing, hurling vehicles, and using your “breath” ability.  When choosing a move action, you would simply remove your monster’s body from the paws base and flick the disc in the desired direction, taking care not to shoot it off the board.  Wherever the disc ends up is where your monster has moved to and its body would be placed back on its paws.  If your paws happened to land adjacent to a building (i.e. touch it’s surrounding sidewalk) you may attempt to take a demolish action.  This means that, while seated, you would hold the body of your monster straight out ahead of you and drop it anywhere on the building in question, trying to both knock the floors free and scatter the meeples inside to the neighborhood your standing in.  After the action the body is also returned to its paws.  There are also four vehicles on the board at all times, which are constructed of the same sturdy wood material as the monster figures.  If one of them is in the neighborhood your monster currently occupies, you may use an action to pick the vehicle up (meaning place it on your monster’s head) and flick it off to hit a building or opponent of your choice. Finally, the Breathe action lets a player place their chin on top of the monster’s head, inhale, and blow at the target of their choosing. 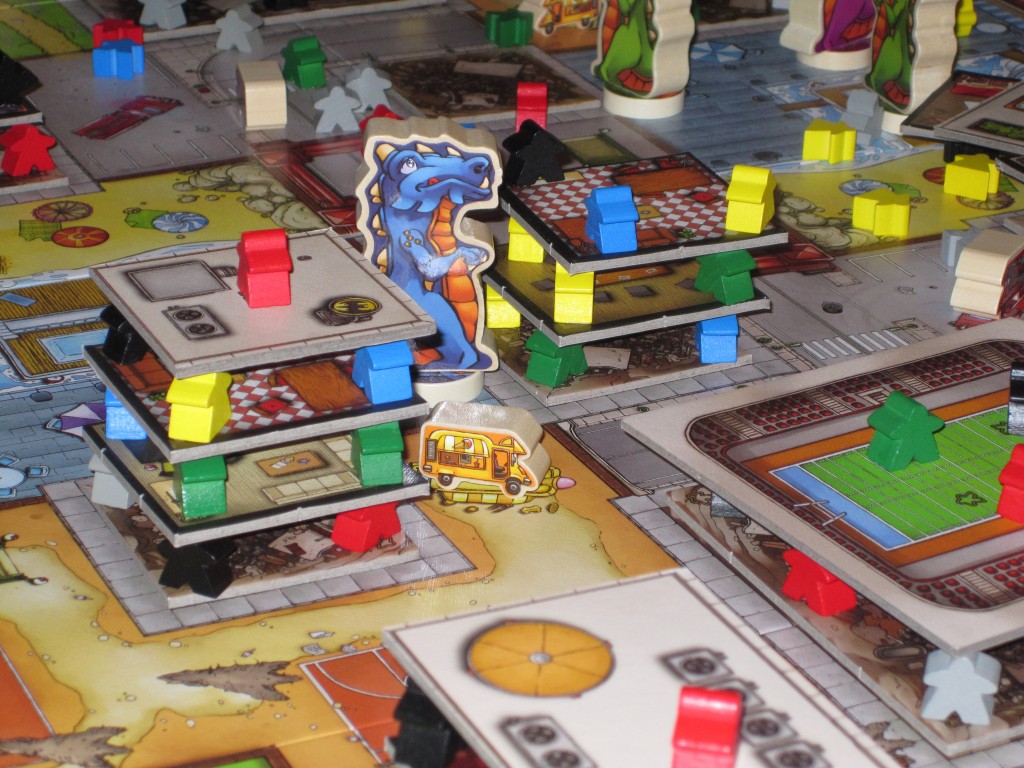 Once these actions are completed, the active players may claim every floor they’ve demolished which has no other game elements on top of it and may eat any meeples lying in their neighborhood (those in or on buildings or the rubble of a building are not considered to be in neighborhoods), up to their limit.  Neighborhoods are color-coded, sectioned off areas around the board and the limit is based on the number of teeth your monster still has.  Printed on the screens you receive at the start of the game is a depiction of your monster’s face, two permanent teeth, and spaces for four breakable ones.  This means you can never have less than two teeth and, therefore, can always eat a minimum of two people.  You can lose teeth either by accidentally moving your paws off the board (or being pushed out by an opponent) and being knocked down during another player’s turn.  If another player causes your monster’s body to fall over, they break off one of your teeth and claim it.  Floors, meeples, and teeth taken from others can all be worth points at the end and are hidden behind your screen in your “stomach” during gameplay.  Truthfully though, it’s difficult to really keep all of this information a secret as all players are getting up and moving around the table so often.  The game ends when the last floor has been eaten or when the Runaway board is filled.  This board sits next to the main board and tracks the amount of meeples that have escaped the city.  If a player knocks one or more of them off the main board during his or her turn, those meeples are placed on the Runaway board, which can result in negative effects for the active player, including losing teeth and being transported to another area of the city. 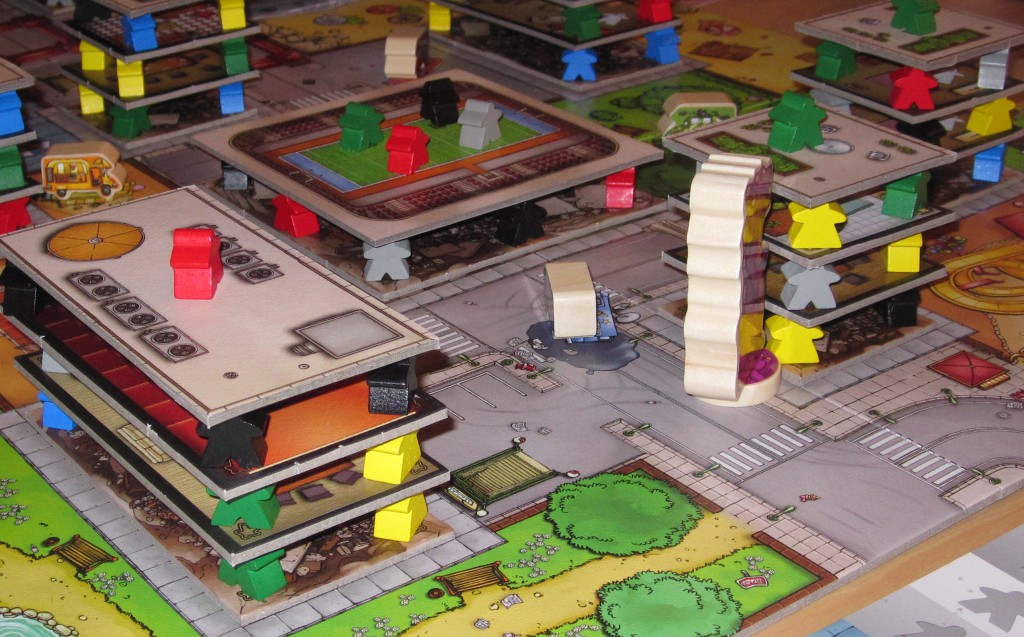 The aforementioned cards that players are dealt also play an important role.  Character cards typically give players their own personal goal to shoot for, either by awarding bonus points for eating meeples of a specific color, or eating more floors than any other player for example.  The power cards give unique abilities like being able to “jump” which is depicted in the game by shooting your paws disc off the monsters head instead of the board to get more distance.  Both off these cards are public knowledge but the third card, your “Secret Superpower,” is kept hidden until you reveal it for a one-time use.  These trigger are powerful, and often hilarious, abilities and take an already over-the-top game to the next level.  Both the hidden and active powers really give the game a lot of diversity in the way you play and compliment the mechanics perfectly.  That said, you’ll likely be too busy having fun to really focus on strategy for at least your first playthrough – not that it’s a bad thing.  Scoring in my group’s first run throughRampage was almost an afterthought.  The winner didn’t really matter as the only thing running through everyone’s minds was “I can’t wait for it to be my turn so I can try to knock down that building.”  There is sound strategy that can be put at work here though, and becoming skillful with Crokinole-like disc-flicking can certainly pay off.  Yes, the asymmetrical nature of all the powers and character cards mean that some characters will be disproportionally stronger and the fact that all the colored meeples are placed randomly may favor some players more than others, but the randomness adds to the title’s chaotic nature and suits the game well.  Still, the more you familiarize yourself with the game, the more you’ll find yourself trying to skillfully blow a building down into your neighborhood without spilling over into other areas or making decisions not to wreck a certain building in favor of moving to an area more populated with meeples that you might need to fulfill character obligations or complete sets (each set of all six meeple colors is worth ten points at the end of the game). 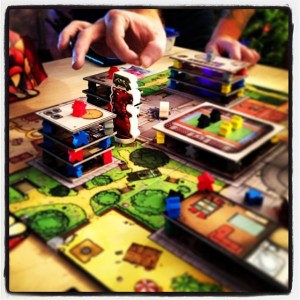 Regardless of skill level or even what types of games you typically like, I simply can’t picture anyone not having an amazing time playing this game.  The group I regularly game with is very into thinky, no-nonsense Euro titles — but as soon as this hit the table, it was like we all turned into little kids again.  I even picked up a second copy so more of us could get in on the fun.  One copy of the game will play up to four people but, combined with a second copy, both boards can be placed side-by-side for team play of up to eight people.  Luckily, the box has a fair bit of room and I was able to fit two copies of the game and all components into one box, although I’m guessing the extra room was left for inevitable expansion to be released in the future.  This game has so many opportunities to be expanded upon in awesome ways.  The $60 MSRP gets you a lot of game for the money and the components are great quality, with a solid feel and vibrant colors throughout.  Rampage was absolutely one of the most pleasant surprises of the year for me and I couldn’t recommend it more highly — wonderfully designed, beautifully illustrated, and a ridiculous amount of fun.