“Remember Me” Is Beautiful But, Ironically, Forgettable 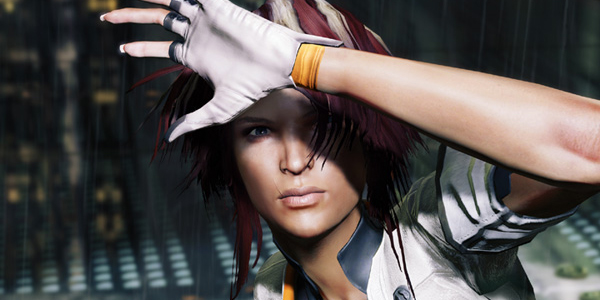 When Capcom unveiled a playable build of Dontnod Entertainment’s Remember Me earlier this year at PAX East, many gamers were less than impressed.  Only being able to critique its technical merits, the finicky combat system and rather loose controls had admittedly diminished much of my enthusiasm for its hyped release.  Now that the final product has hit shelves, however, many will be happy to find that, underneath the still-flawed mechanics, it delivers an impressively creative experience.

Remember Me is actually an incredibly ambitious title that has a hard time keeping up with its own fascinating premise.  Set in a dystopian society in which human memory is digitized and stored remotely, users are able to upload and share their memories to the net and even delete unpleasant ones.  “Memorize,” the corporation that controls this technology, is able to create a surveillance state and rules the population with an iron fist.  This in turn leads to pockets of resistance – hackers who are able to actively “remix” people’s memories to influence their decisions.  While these freedom fighters, known as “Errorists” operate in shadows, the “Leapers,” addicts that have become hooked on absorbing other people’s memories and have (for some reason) devolved into a sub-human form, become a known problem and are banished to the city’s sewers and slums. 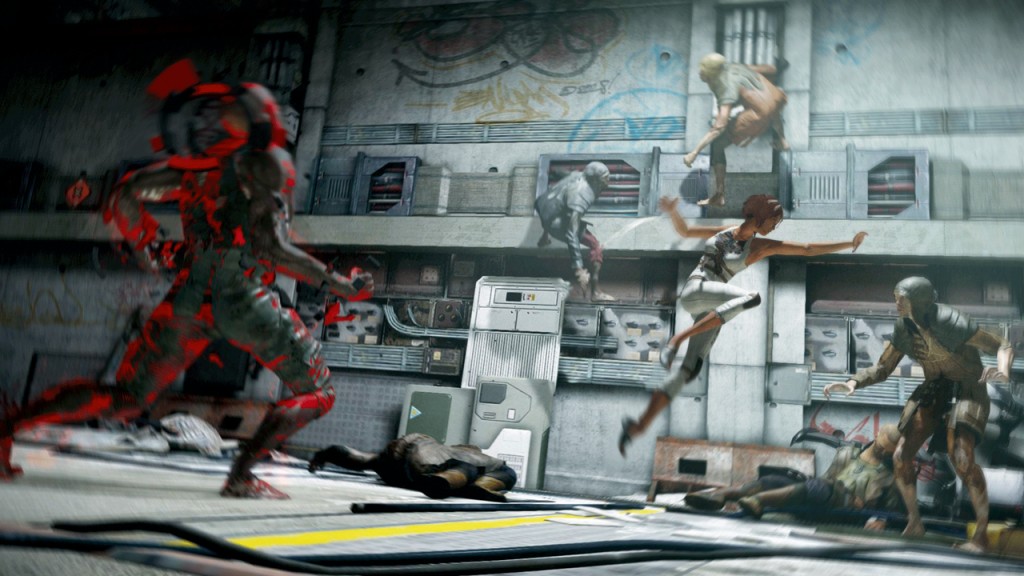 The idea that people are able to alter memories and create virtual backups of themselves is definitely a promising one, especially when the art direction suits the game so perfectly – a gritty cyberpunk fantasy world akin to BladeRunner and Akira.  Unfortunately, the brimming potential is largely squandered here.  There are certainly moments of brilliance, but they are hidden within an otherwise bland (and sometimes downright ridiculous) script, bogged down by an ill-paced presentation. It’s really a shame as Remember Me hooks you at the beginning but quickly looses its grasp, unable to keep up with the momentum. 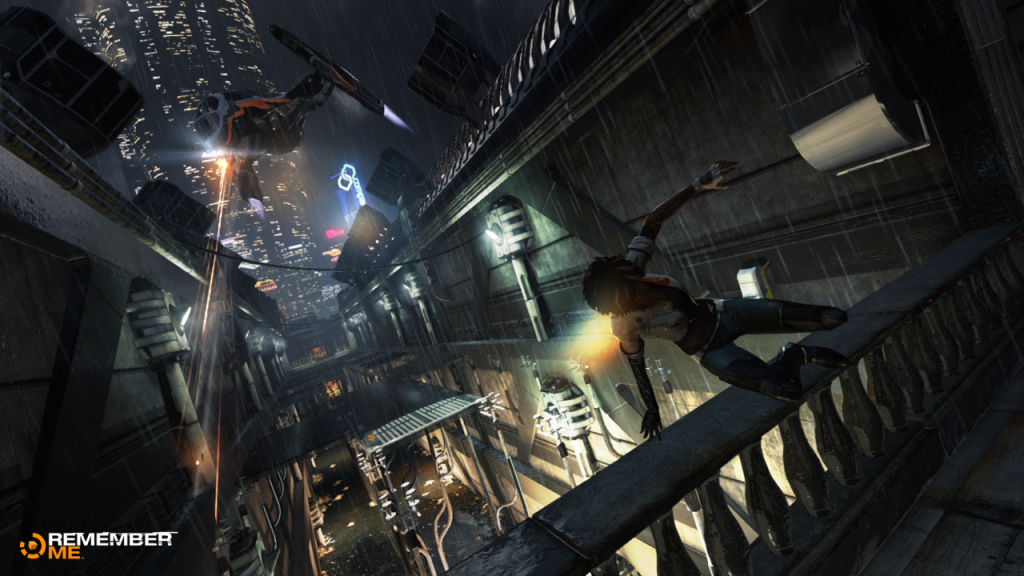 One of the more interesting and unique mechanics in the game is the ability of the lead character, Nilin, to remix memories. She is able to manipulate another’s memory by controlling and omitting key details scene by scene – latching onto an important moment in their lives that have potentially played a great role in shaping the person they’ve become and altering events in realtime.  While watching these alternate histories play out is easily one of the most creative and engaging segments of the game, they are woefully underused, occupying only a tiny fraction of the overall experience. 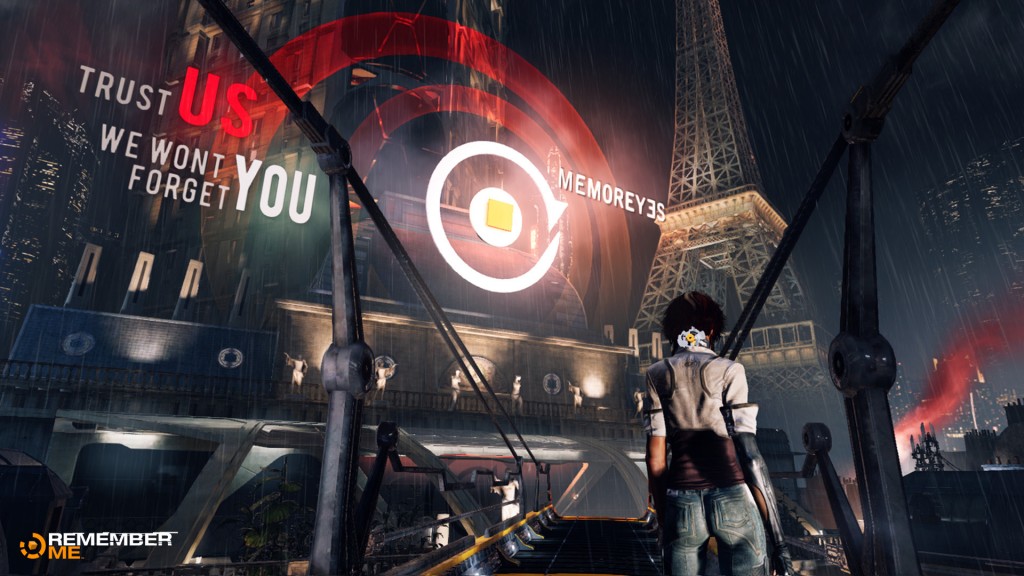 Instead, the gameplay focuses mainly on Nilin’s skills in hand-to-hand combat and, in doing so, drags the game down to resembling little more than another third-person brawler.  Granted, the combo system in Remember Me is a bit more than meets the eye, allowing players to customize an interchangeable string of light and heavy attacks, each with their own imbued status effects – but earning more combos is a very gradual process and the precise timing needed to get the most of the bonus effects can be frustrating.  Since crowds of enemies will take combo-breaking potshots at you, it can often seem impossible to pull off the game’s better combos, leading to monotonous quick attacks and dodging.  This formulaic approach to nearly every combat situation simply kills the excitement and, coupled with the character’s already imprecise movement controls, the fun as well. 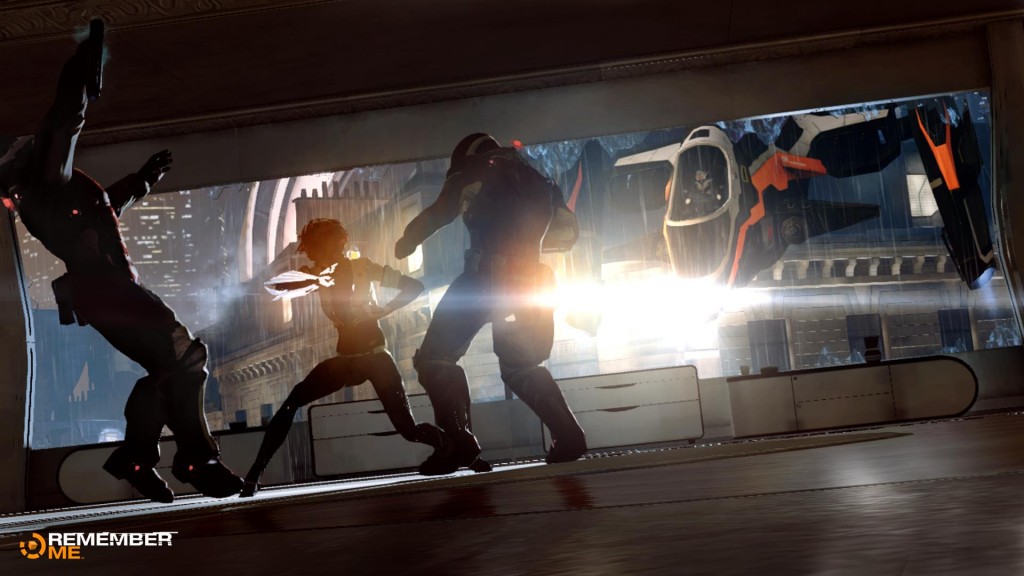 Where the game really shines, aside from the ultra-cool plot, is in its breathtaking visuals, the setting of Neo-Paris in 2084 looks absolutely amazing.  From the decrepit slums to the futuristic cityscape, the sharp, life-like graphics and smooth animations knock it out of the park, with colors that just pop off the screen.  Even the designs of and clothing for the characters themselves look outstanding (the human mouth holograms projected over the mechanized enemies sounds cheesy but is implemented so well.  Unfortunately nearly every other area feels unfinished, unpolished, or simply like a missed opportunity.  With more development time and some script re-writes, Remember Me could have been…well…memorable. What the developer delivered here, while in no way bad, just could have been so much more.  You can see glimmers of sheer brilliance throughout (and even some meta commentary that let’s players ponder their willingness to accept instruction and their reliance on cloud-based technology) but is quick to slump back into tired clichés before any of the smarter ideas can gain too much traction.  Still, for their very first gaming project, Paris-based Dontnod Entertainment injected some much needed originality and style into their debut title and I’m incredibly eager to see what their studio produces next.