Resident Evil: Revelations Takes the Series Back to its Roots 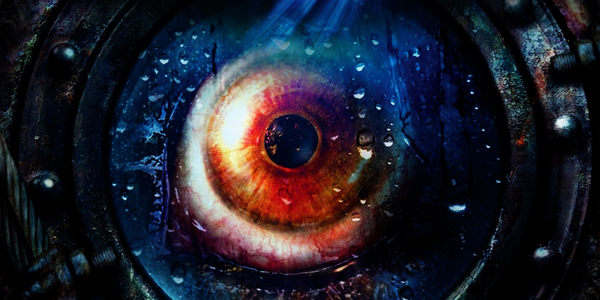 Last year saw the release of two titles from one of Capcom’s biggest franchises – Resident Evil 6 hit home consoles whileResident Evil: Revelations landed on Nintendo’s 3DS.  Shockingly, it was the portable Revelations that had garnered critical praise while the sixth installment for Xbox 360 and PS3 was universally panned.  It was unsurprising then, that Capcom announced they would be bringing fans an HD version of Revelations to consoles, complete with a new coat of paint and a few extras for good measure.

Let’s face it, Resident Evil 6 was a complete mess and a large reason why it failed to click with the core audience was because it simply didn’t feel like a Resident Evil title, favoring a more arcade-y approach and nearly non-stop action while stripping away the puzzle-solving elements and ominous atmosphere.  Resident Evil: Revelations got it right, offering fans the old-school gameplay and aesthetic they’ve come to love.  Resident Evil is definitely a franchise that works best when it sticks to the simple, tried-and-true formula of the PlayStation classic.

Taking place between the timeline of Resident Evil 4 & Resident Evil 5, Revelations brings back series veterans Jill Valentine and Chris Redfield, along with a handful of new faces, who are faced with a new bio-terrorism threat.  When the story kicks off, Jill and her new partner at the BSAA, Paul Luciani, are sent to investigate the last known location of Chris and another newcomer, Jessica – a derelict cruise ship called the SS Queen Zenobia.  While the Queen Zenobia may be the best idea for a creepy setting the series has had in a long time, the script and story are predictably awful.  At this point, this franchise is known for its convoluted, clumsy storytelling and laughable voice-acting, but Revelations is so over-the-top ridiculous that it almost becomes a parody of itself.  Told through a series of flashbacks and cutscenes interspersed with present-day sections, the plot (in typical RE fashion) revolves around massive government conspiracies, cover-ups, and multiple double-crosses – all stemming from an incident on the floating city of Tarragrigia, where the terrorist organization known as Veltro released deadly biological weapons on the public to protest the city’s solar energy development…for some reason. 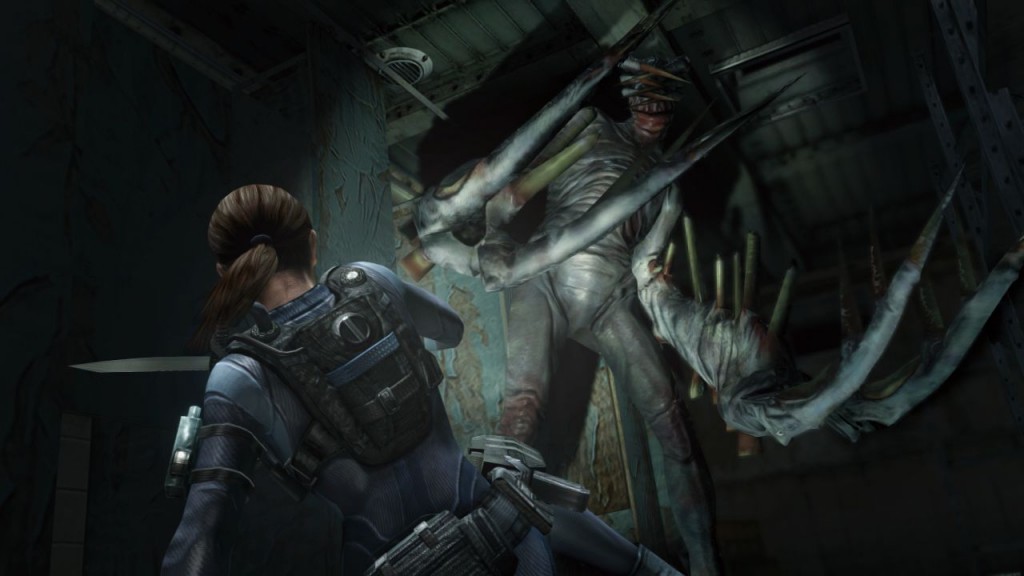 Luckily, the creepy, claustrophobic atmosphere is enough to make you quickly forget about the nonsensical story and get lost in the atmosphere.  As the player, you are completely trapped aboard a lifeless vessel in the middle of the ocean.  Its ornate living quarters, gaudily decorated grand halls, tight corridors, and sterile control rooms make for the perfect place to host a survival horror adventure.  Most areas of the ship are shrouded in darkness or glow dimly by electric candlelight and the eerie creaking of the ship and hissing steam pipes keep the tension level high.  With all the things than can (and do) go wrong, including the ship taking on water and being attacked by enormous mutated sea monsters, it’s a wonder it’s taken this long for the series to explore this setting.  Although I would have been fine with the entire adventure taking place on this vessel, the action also shifts to arctic caves, industrial complexes, and shorelines as you trade off playing as different characters to progress the muddled story forward. 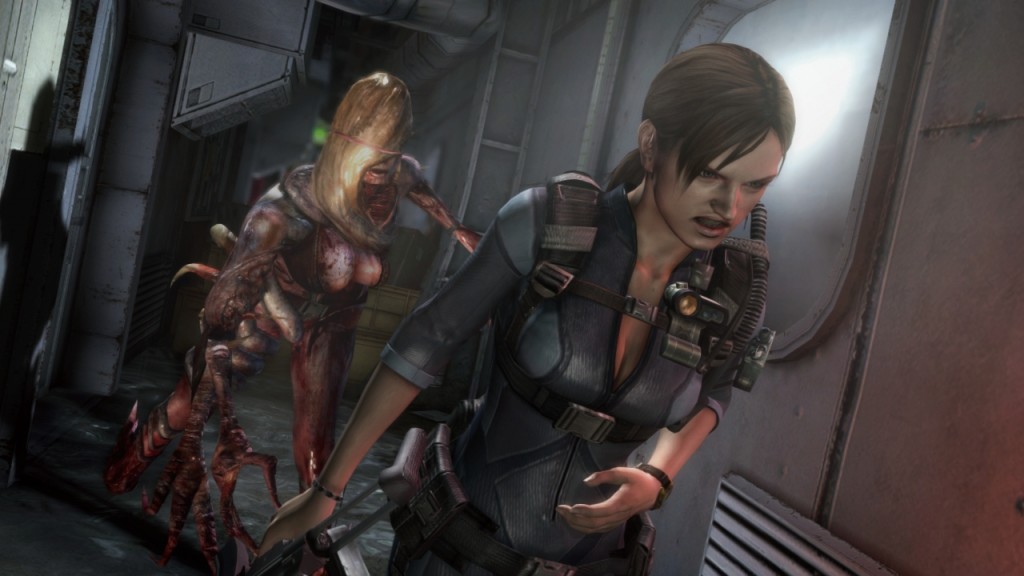 Enemies are actually a bit of an anomaly in this franchise entry.  The traditional zombies (or at least zombie-like infected humans) are replaced with oozing, water-based foes.  Vaguely humanoid with gaping maws that occupy most of their head, their bodies are resistant to bullets and dissipate into the floor when killed.  Their jerky movements and otherwordly moans come off as intimidating at the start of the adventure, but become commonplace by the end, mainly because there are so few enemy variations keep player on their toes.  The boss battles, while few and far between, are actually fantastic however.  The final boss in particular is one of the more fun encounters in the entire series. 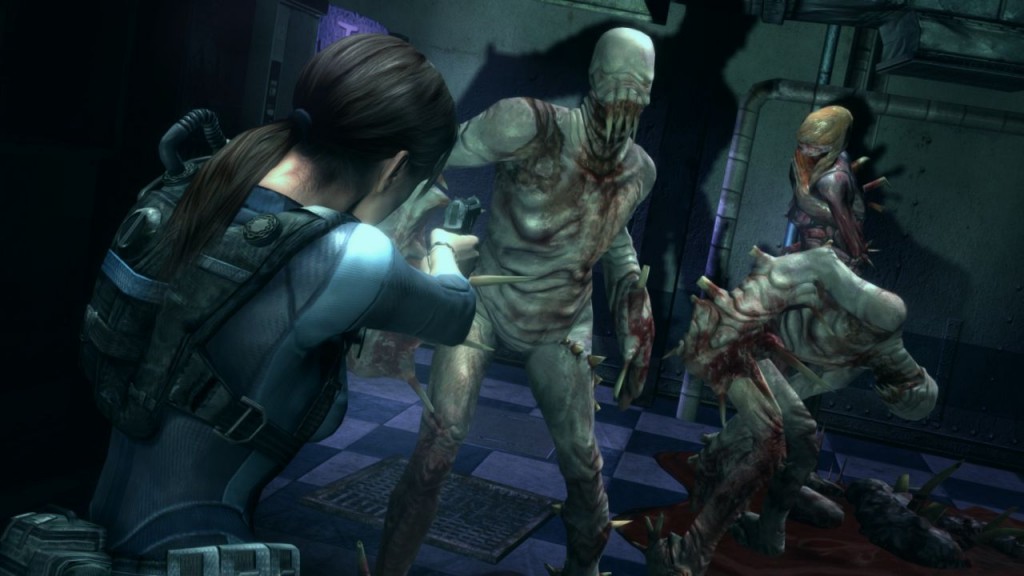 The HD makeover looks as good as can be expected.  You certainly wouldn’t expect anything mind-blowing from an image that’s been converted from a tiny portable screen, but the visuals are serviceable.  Character models look above average while textures can be a bit rough and muddy.  Still the animations are smooth and, for the most part, it’s a well-done port, even though some may miss the 3D feature from Nintendo’s handheld.  Some of the original’s quirks surely could have been left out though – the episodic recaps may have worked for the short play sessions common with a portable device, but get old quickly when hosted on a console.  Overall, the HD version of Resident Evil: Revelations, for better or worse, has the look and feel of classic Resident Evil titles, right down to the ridiculous plot twists and campy dialogue fans have come to love.  Although the puzzling lack of co-operative play that the last several RE games have shared and the repetitive enemy design drags the experience down a bit, the overall package is a lot of fun.