Return Of Marvel Legends Wave 3 Shows What Hasbro Does Best 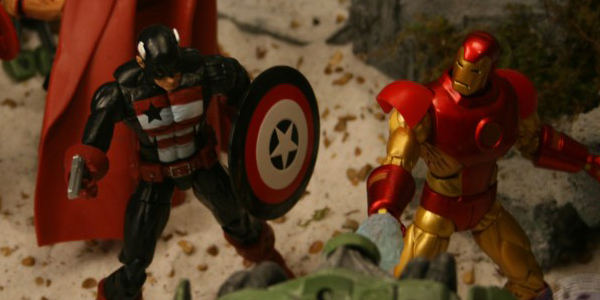 When Hasbro brought Marvel Legends back to life earlier this year, no one knew just how huge a hit the relaunch would be.  With the first two waves reaching sell-out in record time, the Marvel team had to think fast to keep up supply to meet the demand… Enter Marvel Legends Wave Three, a series consisting almost entirely of cleverly repurposed parts with minimal new tooling, which still manages to cover some new corners of the 6″ Marvel Universe.

Hasbro needed to turn around a third assortment of Marvel Legends quickly to keep the massively popular line refreshed on the shelves, and the best way to do that is pull a trick from their hat which they excel at better than most other toy companies– repaint and reuse!  Legends’ third series includes six figures, all created almost entirely from reused parts, previously cancelled figures and in-house kit bashes.  In spite of this lack of new tooling (and the sorely missed Build A Figure), the newest wave of 6″ Marvel heroes and villains is actually pretty cool. Essentially in this wave, we get three somewhat new figures– the long-demanded US Agent and Neo-Classic Iron-Man, and a new trechcoat-clad Punisher, and three repaints, in the form of X-Force Deadpool, Dr. Doom and Mystique (who’s made up almost exclusively of Madam Hydra parts). What the figures lack in BAF pieces they make up for with accessories, as each figure includes some kind of gear, often many weapons, as well as a display stand similar to the Avengers movie line bases. 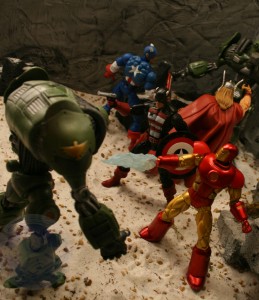 US Agent is probably the best figure of this set, and John Walker makes good use of the Bucky Cap body from Wave Two, with a new head, belt and his black, white and red shield. While the size of this buck has been an issue for some fans, the sculpt is so good– packed with realistic detail and a wonderful articulation pattern– that I have no issue with US Agent using it. The new portrait is great, giving Walker a characteristically serious expression that makes him stand out from the more square-jawed heroic look of Steve Rogers and the brooding graveness of Bucky. Little details like the excellent new belt and gloves make Agent more unique, and overall he’s a nice representation of the long-desired hero. The only drawback, other than the height discrepancy, is the lack of a holster or sheath on his belt. These holders were fantastic for Bucky, and I wish Walker got the same attention to detail.

Iron-Man makes another Legends appearance, this time based on his early 90’s “Neo-Classic” armor. Legends fans may notice this figure from his aborted initial release in the Iron-Man Legends series, and like Extremis from Wave One, he’s received a very nice, metallic paint job that is pulled off perfectly. The clunkiness of this armor is a welcome change to the more svelte Iron Men Hasbro has brought us so far, and I especially love the big, stocky boots that ground the figure well while still offering (minimal) ankle articulation. The only odd design choice with this version of Tony is the shoulder pads, which are strangely not cast in the same metallic red, leading them to look very flat and plastic-y surrounded by the other red armor’s metallic finish. 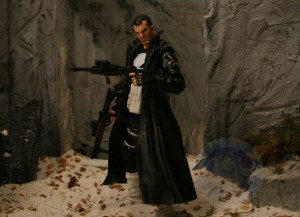 Punisher is the other figure I’d call “new,” mostly due to the new portrait and ammo belt he sports over a mash-up of the Ultimate Nick Fury and Winter Soldier bodies. I wasn’t too excited about Punisher ahead of time, but having this figure in hand, it’s virtually impossible to not admit he’s the best Frank Castle we’ve ever seen in this scale.  While the trench coat look isn’t for everyone, it fits Castle nicely while allowing another reused part, and the three dimension aesthetic of his skull-toothed ammo belt looks awesome poking out from under the jacket. The figure includes the baggy pants and thicker boots of Winter Soldier, making this Punisher look more like a vigilante and less than a super hero, which I believe is a good thing. But what really pushes this figure over the edge is the fantastic headsculpt, which is packed with all the grizzled, angry attitude you could hope for. Add to that the copious amount of guns this figure includes (pistols, automatics, and even a sniper rifle) and it’s hard not to dig this new Punisher, even with so many previous versions out there.  Punisher includes one of the variants in this wave, a comic style Blade who has yet to surface at retail.

Mystique gets an upgrade from her rather lackluster Toy Biz figure, sporting her modern black leather costume and just as many munitions as Punisher. I love this look for the mutant mercenary, and adore the use of the excellent modern Legends female body, with all the articulation she needs for a multitude of posing options. The only downside for her (and it’s a big one in my opinion) is the reuse of the Madam Hydra head, right down to the hair. I will admit the Hydra head looks better with blue skin, but it’s a pet peeve of mine whenever two unique characters share an identical head, and this hair just doesn’t scream “Raven Darkholme” to me.  The loss of her own headsculpt nonwithstanding, this Mystique still manages to beat out her previous Legends figure for me, but I still hope Hasbro revisits her with a better portrait and her classic white dress sometime down the road.  Mystique is another variant in this wave, as future assortments will swap her out with fellow mutant badass Dani Moonstar, who has yet to be seen at retail. 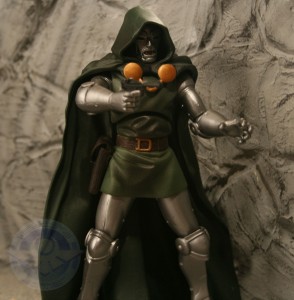 Deadpool and Dr. Doom round out this assortment, and both are complete repaints of their previous figures, which actually isn’t a bad thing as A.) both figures are very nice, and B.) both are also getting tougher to find on the secondary market, for a reasonable price.  Kudos to Hasbro for reissuing these tough to find figures, and double-kudos for not forcing those of us who had them to re-buy for a BAF part!!  Doom is a darker repaint of the excellent figure released a few years ago in the Fantastic Four Classics, and remains one of the nicer toy treatments for von Doom. What he lacks in the 3.75″ figure’s great texture, he makes up for with great articulation, a functional holster for his gun and a removable face mask, revealing his grisly, burned visage in all its glory. He remains a quality figure, although there really is little difference from the FFC version, so if you managed to track him down, you may want to pass on the ML3 version. 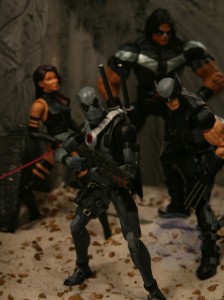 Deadpool first came out in the fan-vote two-packs at Toys R Us, but has started demanding higher prices online as those box sets disappeared. The solo release Deadpool is the exact same figure, complete with the twin swords, rifle and pistol from the two-pack version, and remains a solid release. The chunky, Ed McGuiness-style headsculpt really captures the merc with a mouth perfectly to me, although like the previous version, this figure’s limbs seem a little thin by comparison to the melon head and thick neck. It’s not really a dealbreaker, especially considering how voracious Deadpool fans tend to be, and the strong articulation and generous accessories make for a good value. Deadpool gets a new paint deco in his grey and black X-Force outfit, which helps to round out the 6″ X-Force team, alongside Warpath, Fantomex and the Comic Con exclusive trio of Wolverine, Archangel and Psylocke. While both Doom and Deadpool are repaints, their repaints are also getting repaints!  Deadpool has a variant to be issued in his classic red and black togs (identical to the two-pack version, seemingly), while von Doom will wear out his all-white Future Foundation look.

I understand that a lot goes in to making toys, and the whole process takes more time than most people would expect. People may knock Hasbro for their tendency to reuse parts, but in a case like Legends Wave Three, I’m much happier getting a fresh set of six semi-new figures than none at all. As a customizer myself, I get a kick out of seeing one of my favorite toymakers essentially doing the same thing I do, figuring out how to mix up parts to come up with something new, and I applaud the creativity on display in this wave and its cool characters.  Were this trend of 90% reuse to continue, I’d have my reservations about how far Legends would keep going, but the 2013 figures we’ve seen thus far prove that Hasbro’s not making a habit out of not including original tooling, and I’m fine as long as they keep their reuse to a level this small and this creative.

Pick up your Marvel Legends Wave Three figures now, before the variants take over and you miss out on great figures like Mystique, Punisher and X-Force Deadpool– Toycade has all six figures in stock now, so Click Here to order yours today! 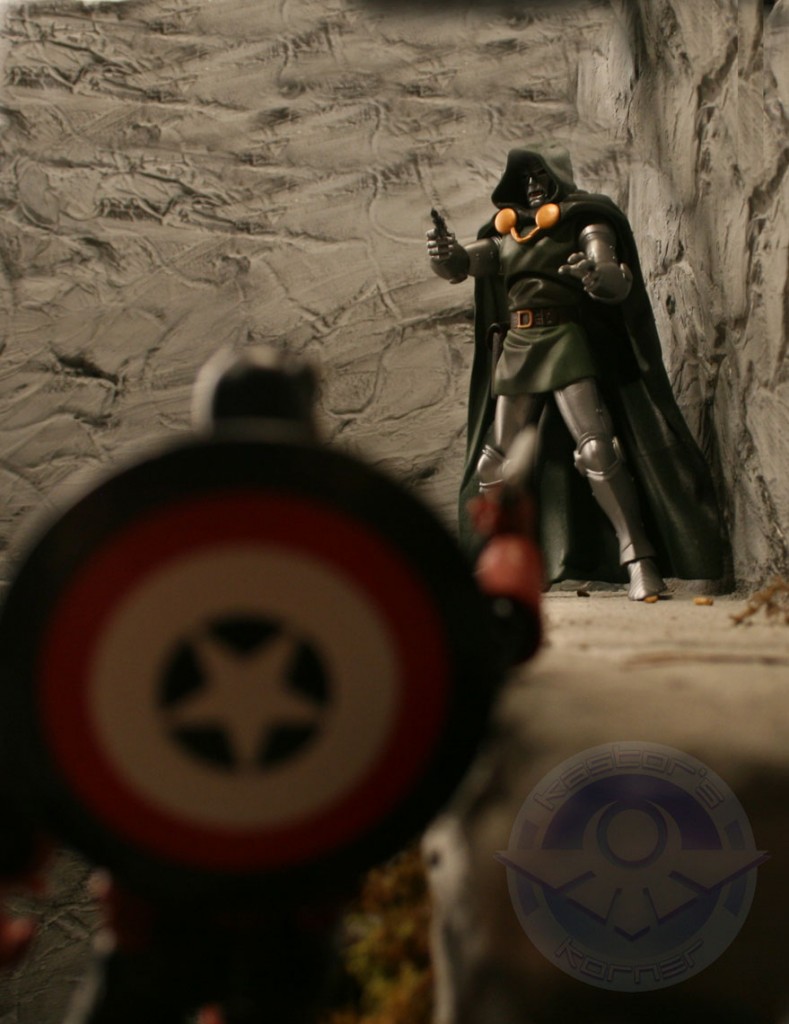