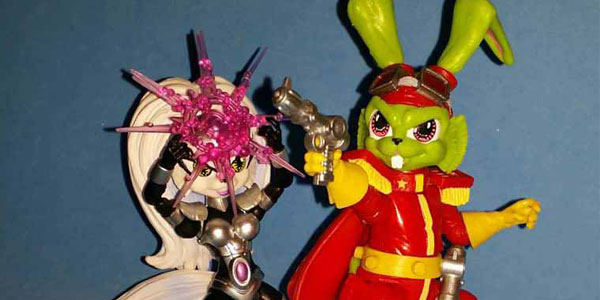 The late 80s and early 90s definitely had their own prosperous era of television programming aimed at selling toys. Thanks to the sales and ratings juggernaut of Teenage Mutant Ninja Turtles, adventure series featuring anthropomorphic animals were approaching a saturation point, with varying results. One such series was Bucky O’Hare and the Toad Wars, adapted from the Continuity Comics series.

Though it aired only one season, the series was a treat for the discriminating viewer. The characters were colorful and dynamic, the action was fun, and the voice cast performed remarkably against the unfortunately disappointing animation and questionable TV airtime in syndication. The biggest nail in Bucky’s coffin was Hasbro’s distribution issues. Without targeted case ratios including the titular character and his friends, buyers were met with pegs full of the unappealing Toad Air Marshall. Without sufficient sales, Hasbro cancelled the line, only releasing one assortment. Even First Mate Jenny didn’t get a figure, the lone piece that would have otherwise completed the main team.

There was so much potential for that series, and Bucky set it up to fail from all sides. Righting this wrong, Boss Fight Studio resurrects Bucky O’Hare and First Mate Jenny (and hopefully the rest of the aniverse) in fine action figure form. The sculpts and paint replicate the Continuity Comics likenesses superbly, down to the intricate eye detail. The articulation is outstanding, capable of giving our heroes copious posing opportunities. Further adding to their display potential, both Bucky and Jenny are given multiple face plates, hands, and weapons. Boss Fight Studio gave Bucky fans an embarrassment of riches here. 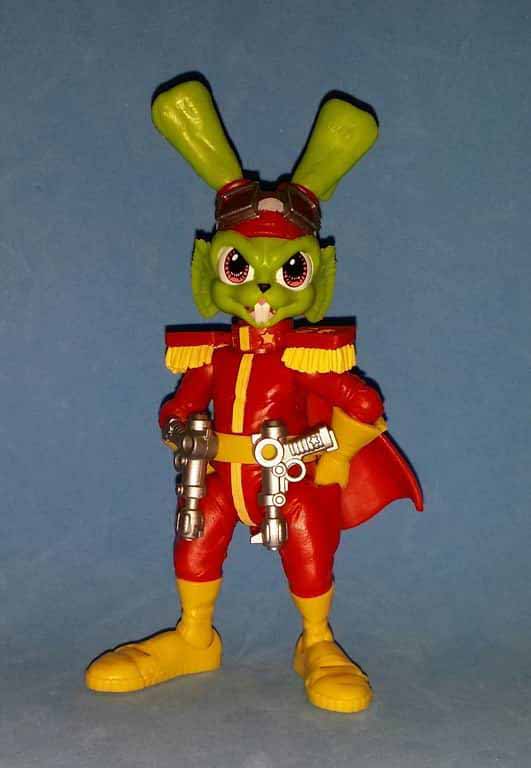 First off, if you wish to admire them from afar, you can do so. Bucky O’Hare and First Mate Jenny are preserved in a resealable blister card including a colorful, vintage-inspired card art. The back shows upcoming variants, Chief Gunner’s Mate Dead-Eye Duck, and the Storm Toad Trooper. Lastly, detailed dossiers of the figures helps illustrate how well-conceived these characters are. But then again, no one should deprive themselves, and Boss Fight Studios giving us resealable packing should not be done in vain. Please indulge yourselves and open these incredible action figures. Inside, both Bucky and Jenny have 2 plastic trays to properly secure all parts.

Now before going into further specifics, one should be aware: with these adult collectibles, the focus is on tight joints, snug fit and solid and appropriate use of paint and plastic. That said, my figures’ parts fit a little too smug. Not to worry! The plastic softens quite nicely when heated. It is highly recommended to blow dry your figures before any part-swapping. Also, remove and fasten all parts carefully so nothing tears. When the plastic cools, space adventure awaits!

Bucky O’Hare is loaded with articulation. If it’s on him, it moves. He has swivel and hinge elbows and knees, and even toe and tail articulation. The cape slides into his back, and is soft enough for some dynamic wind-swept posing when rotated slightly to the left or right. Even the ears are attached as ball and socket pieces. He includes 2 signature blasters, even though he uses 1 predominantly, and they fit into the pegs on his belt. The paint is crisp and well-applied on my figures. A notable mention are the eyes and eyelashes. Your eyes are drawn to them immediately, and the detail is really vibrant and comic-accurate. It’s like life was breathed into these sculpts, and gives the figure so much personality. 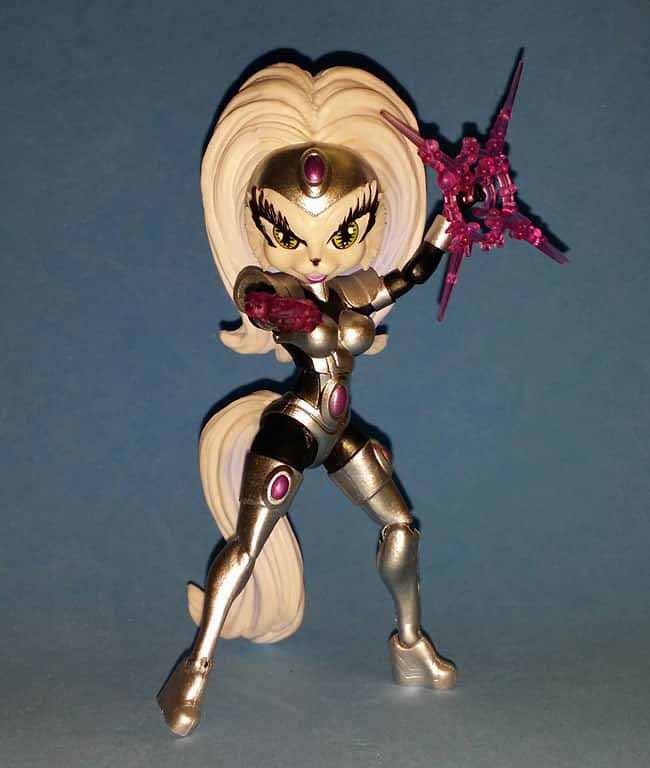 First Mate Jenny is a trickier one. One would think the biggest obstacle on her would be her voluminous hair and tail causing balance issues with her slender frame and small feet. Somehow, Boss Fight Studio took that weakness and made it a strength. The hair appears to be 2 parts so the center is hollow, eliminating weight. Secondly, though rigid, it can rest on her tail for balance when face forward. Thirdly, her ball-jointed tail is floor-length, therefore acting as both a brace for her head/hair and a makeshift tripod for standing poses. Their engineering and toy design is without peer. She includes effects parts showing off her crystal-augmented telekinesis. They attach or plug at the wrist, but more creative displays can be made thanks to the articulation and hands provided. Regarding her paint, the silver used is very lustrous and shiny and there are small washes on her hair where shadow would reside.

There are a few things here making sense from a production standpoint that I would have preferred to see handled differently. For Bucky O’Hare, he has a huge red ball neck. I would have preferred the ball neck to be molded in green, matching the rabbit ears and faces. It’s only visible on the back of O’Hare’s head, obscured by his face, so it isn’t distracting at all as-is. Red may in fact work better than green, but I personally visualize the ball neck area neck being exposed fur. Also, the silver on Bucky’s blaster is paint well-applied, but it can create a struggle fitting it on his belt pegs. I fought to get one on, and upon removal, the was a silver ring on the peg left to scrape off. That said, I had no trouble at all with Bucky’s other gun, and we are talking 1/100 mm range of error in diameter. Again, all parts needed to be heated with a blow dryer before swapping faces and gloves. It’s a bit inconvenient, but part removal is so easy afterwards, and fits so tightly when cooled off, it’s almost preferable to handle it this way.

Jenny has a minor mention with her tail execution. Curiously, her tail attaches with a black ball joint. Jenny’s knee and ankle joints are black as well. This may have been an unavoidable tooling situation with the vendor. The knee and ankle joints were painted in silver to compensate, but after modest movement, the paint scrapes off (revealing the black plastic beneath) and the joints become looser. Thankfully, the tail helps with the instability. That said, I really do wish the tail joint could have been white as part of her tail. With some imagination, I can come of with a design excuse or rationalization why it is black, but I do lament the tail joint not being white, and the knee and ankle joints not being grayer. If they are using the same tooling approach for the variants, I hope they select clear plastic joints for Astral Projection Jenny so the visual contrast isn’t so glaring. Maybe in another production run, this can be addressed, too. Thankfully, this doesn’t mar one’s enjoyment of these figures at all.

That said, do not hesitate to buy these toys. There are times when such love is applied to a sculpt that needs to be rewarded with a purchase, even with only a passing interest in the property. These are just such toys; these are the ones to buy. They are little works of art. The biggest regret about Boss Fight Studio’s Bucky O’Hare action figures is there’s so much to love here, that I wish more characters were out. As a collector, I purchase monthly action figure subscriptions and rarely shop for retail action figures anymore. I have had no problem being patient because I am always rewarded for my efforts. Boss Fight Studio’s Bucky O’Hare action figures are so well sculpted, and captures Michael Golden’s art in such a fully realized way, that I find myself impatiently waiting for the meaningful variants, Dead-Eye and the Toad Troopers. If there are figures coming after the initial four, I can’t wait. The sculpts are so perfectly done, nothing less than the main players of the Toad Wars and the Righteous Indignation needs to become plastic reality. Anything less would be…indignant. I haven’t been this excited about a set of action figures in a long time. Even with only 2 inaugural figures out of the gate, Bucky O’Hare is easily 2017’s action figure line of the year. 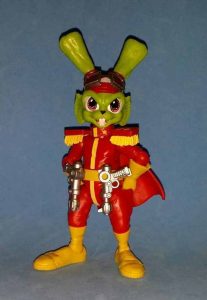 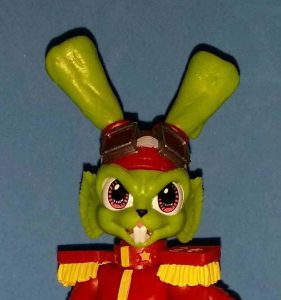 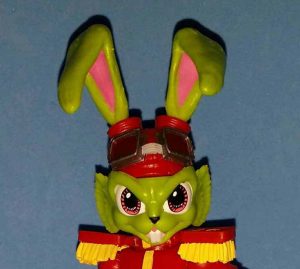 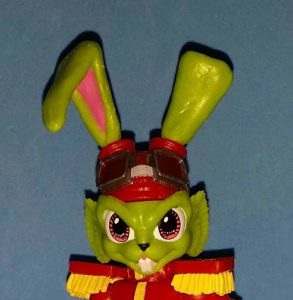 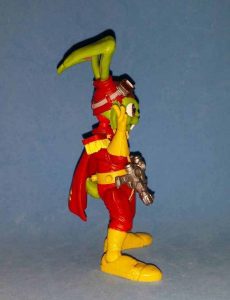 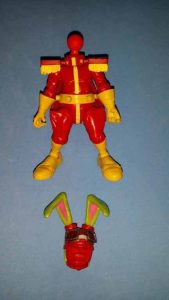 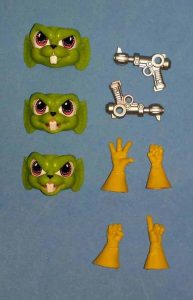 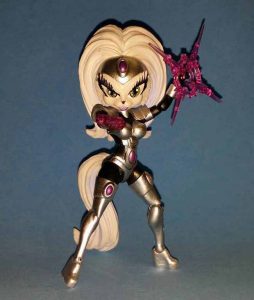 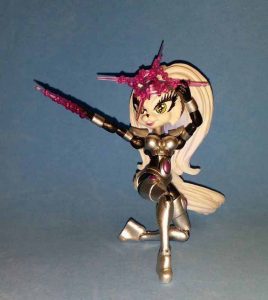 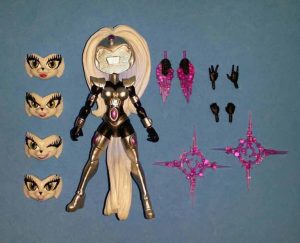 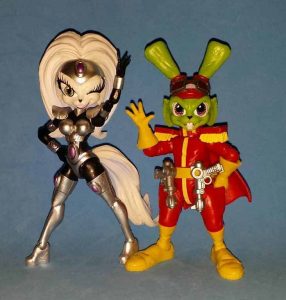 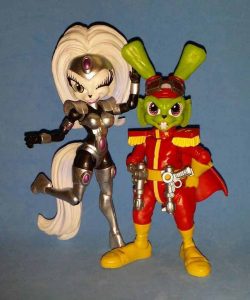 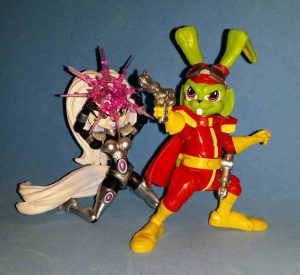 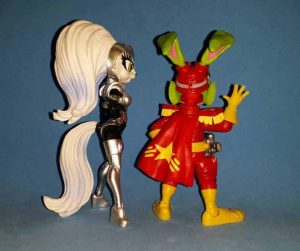 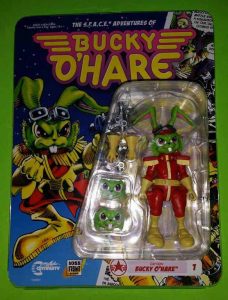 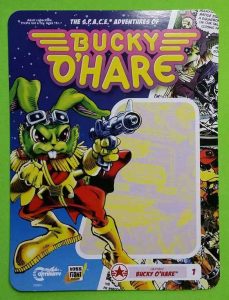 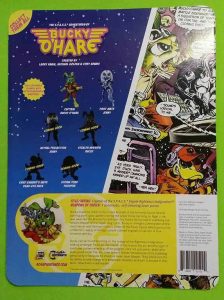 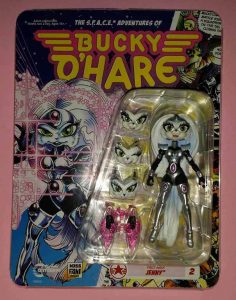 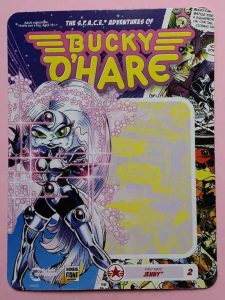 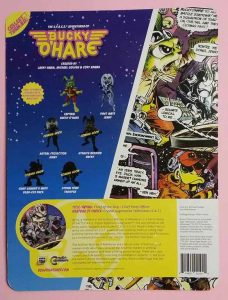