DC Universe wave 20 brings to a close the five-year line, which has delivered plenty of ups and downs, along with a very impressive collection of comic-style superheroes and villains. Starting our three-part look at the final wave of DC Universe Classics, we’re taking a look at two of the “bright” points in this Brightest Day themed wave… the all-new Green Arrow and classic Red Arrow. How do these archers compare to the previous bow-wielding heroes we’ve seen? 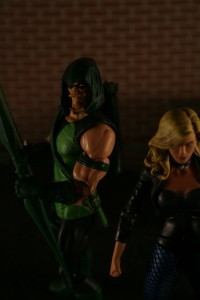 Kastor’s Korner has always had a close relationship to DC Universe Classics, so we decided to extend our review of the final wave to a three-parter as a proper sendoff. We’re kicking things off with my two personal favorite figures from this mix– a new hooded take on Green Arrow, straight from his Brightest Day look, and the firers DCUC appearance of Roy Harper, the Red Arrow! Roy logically uses the Wave 9 Ollie as a base body, and it’s still a fantastic sculpt, with lots of detail and very realistic fabric folds on the tunic. Red Arrow sports a decent new headsculpt, with a good amount of personality but which unfortunately carries over the Four Horsemen’s recent penchant for heroes with their mouths open. While the result is nowhere near as absurd as Alan Scott, it keeps Roy from fitting in completely with the much more neutral Mr. Queen. Red Arrow sports some nice coloration, with his multi-shades of red complementing Ollie’s most iconic costume. A very nice added touch is a gloss finish to Roy’s gloves, giving them a nice patent leather look.

Ollie fares even better, although I still question whether I needed a second Green Arrow (excluding Connor of course), and if anything I would have much preferred a classic, Grell-inspired longbow version of Ollie rather than the current one. Costume choices are, of course, just semantics here, and I have to admit I was incredibly impressed with this new Arrow from the moment I had him in my hand. The amount of detail on his tunic is even better than the previous version, and between the belt complete with pouches and mini-arrows hidden behind his gauntlets, it’s clear this Ollie means business. The hood is pretty good, made of a pliable rubber that does not inhibit head movement in the least, although depending on the pose you choose, the ends of the hood can cut off before reaching the shoulders, leaving it to appear to be floating, attached to nothing (which is clearly the way Ollie likes his personal life, but not necessarily his wardrobe). 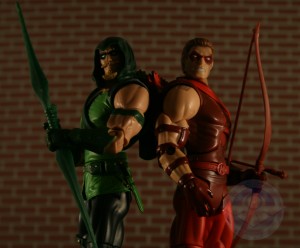 I love that both archers get ball wrists to help with some very dynamic bow-firing poses, although it is unfortunate that their bows are cast in one solid piece with arrows attached, making it impossible for either figure to draw back their bowstring. I was much happier with a situation like the recent Young Justice version of Red Arrow, which featured a stringless bow– for that figure all you need to do to have a much more robust bow is grab one of the clear rubber packing bands included with any Mattel figure and wrap it around both ends of the bow– the result is a functioning bowstring that looks pretty great… at least worlds better than a single molded piece as we get here.

So there’s the first two figures in the final wave of DC Universe Classics. So far by my count, we’ve seen one much-welcomed supporting hero, and a beautiful new take on a major hero, so I’ll call it two-for-two so far. Check back soon as we take on the rest of this new series… and be sure to pick up your DCUC Wave 20 figures from our friends at Mike’s Comics N Stuff– CLICK HERE to check them out!