Review: The Lazarus Effect Is Pretty Much DOA 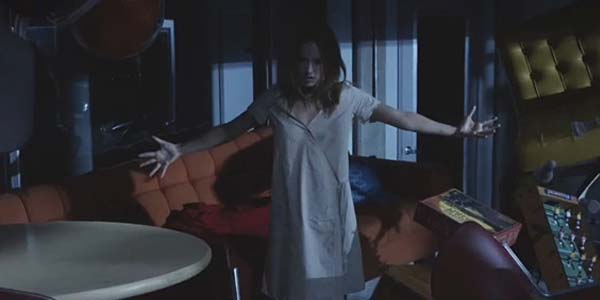 What happens when you combine a “science gone wrong” cautionary tale, demonic possession and a supernatural slasher?  You get a mess of a movie.

The Lazarus Effect had a lot going for it.  It sports a great cast, anchored by Olivia Wilde, along with Mark Duplass, Evan Peters, and Donald Glover (AKA Childish Gambino, depending on where you fall on the comedy-to-hip hop spectrum).  And the core concept– a group of scientists who discover a substance that can bring dead things back to life– offers a solid, if maybe overly familiar, starting point.  That’s more positives than many horror films get dealt, and yet The Lazarus Project wastes its potential with its weird structure, clunky dialogue and maddeningly ambiguous themes.

The plot of the movie is actually really slight.  Wilde’s Zoe and her partner/ fiance Frank (Duplass) lead a scientific research team that has been developing a serum which can reanimate dead animals.  The downside is, this research was not approved by the university they work for, so they’re flying completely under the radar, right at the edge of old school mad science.  Just as they achieve some success with their most recent experiment (a dead dog, not only brought back to life but healed of his cataracts), their project is discovered and they are shut down by the school and a random evil executive type who is looking to steal their work.

In a last-ditch effort to save their research credit, the team breaks into the lab at night, attempting to replicate their success.  They plan to document it on camera thanks to Eva, a student who they recruited earlier to film their secret and mostly illegal work, for reasons  A lab accident ends up electrocuting Zoe, and when she is unable to be resuscitated, Frank decides to use the formula on her in a last-ditch effort to bring her back.

It works, and Zoe comes back to life… but she was dramatically changed by what happened.  How?  And why?  This isn’t a film interested in exploring those questions.  Instead, after a few clunky lines of dialogue blending spiritual, quasi-religious exposition with faux scientific mumbo jumbo, Zoe goes on an inexplicable killing spree, picking off her colleagues one by one.

This is my biggest problem with The Lazarus Project.  Based on the backdrop of the story, it’s obvious that some kind of science will be involved in what happens.  Even if it’s dumb, movie science, that’s basically a given.  The spiritual aspect is also strongly suggested by the title, named after the biblical character who is resurrected from the dead.  I was not at all surprised when two characters had a debate over science versus spirituality– that clash of ideas seems like the logical convergence for this kind of story… But instead of any resolution or explanation falling on one side of the equation or the other, what happens to Zoe post resurrection is left completely, 100% ambiguous.  Leaving some questions unanswered, some things intentionally vague, can be a great storytelling device, a way for the audience to insert their own beliefs and feelings into a story.  But when the entire movie ends COMPLETELY open to interpretation, it feels less like an invitation and more like a lazy cop out.

Zoe’s rampage is barely explained at all, aside from her cockamamie belief that the neuro-chemical flood within the brain at the time of death literally opens a door from our plane of existence to the next.  Forgetting she’s a scientist… let’s just go with it for a moment.  From her perspective, Zoe thinks that when she was brought back to life, it screwed up the “doors” she was in the process of opening using her brain chemicals.  So that drives her crazy… and her most logical way to deal with those feelings?  Murder everything within arm’s reach.

The theory Zoe believes in is beyond goofy, but what I found most frustrating is that the filmmakers didn’t even have the guts to go big and broad and weird, and assert that this was, indeed, what was happening.  Instead, we have evidence that what’s happening to Zoe may have nothing to do with science– she may in fact be possessed by some sort of demon.  The resurrection itself is shown to be traumatic, suggesting that maybe coming back to life broke Zoe’s sanity, leading to her current state with no spiritual involvement.  And just for kicks, we learn late in the movie Zoe’s origins, which hint that maybe she’s actually just been crazy and homicidal all along.

That’s a lot of possibilities swimming around, and there are cool places the story could go with the interrelation of these big ideas.  Do Zoe’s religious beliefs stem from her crippling guilt over a traumatic childhood experience?  Or did that event spark her passion for science instead?  By remaining completely agnostic to these concepts, the movie basically ends up making itself pointless.  The last act offers no explanation or  attempts at deeper understanding, instead devolving into a boring, predictable and un-satisfyingly short slasher movie complete with every jump scare viewers have been trained to expect.

The pacing of the entire movie is totally weird.  From the time Zoe is brought back to life, until she commits her final kill takes literally less than 20 minutes.  Everything that comes before is a very extended establishing sequence, introducing the team and their project, as well as several other characters who show up once then never come back.  The first two thirds of the movie contains barely any horror beats at all, which is sure to disappoint those looking for tons of scares… and the concepts being flung around by our characters are so broad and silly– and so unfocused– that it’s hard to take anything that transpires as serious drama.  And the wishy-washy attitude toward not explaining what we’re seeing at the end of the film feels like the filmmakers are simply kicking the mess of toys they piled up previously and are now spreading it out all over the room.

I wouldn’t be so frustrated with this movie if it had no merits, but it does.  The cast is really quite good, especially considering what they have to work with.  I love that the focus remains on Olivia Wilde, even as Duplass goes into full Dr. Frankenstein mode, and she gives a great performance here.  She’s wonderful as the guarded and sort of sad researcher in the beginning of the movie, trying to marry her concepts of science and spirituality together while still coping with a crippling childhood trauma.  As I said earlier, Zoe’s theory is pretty damn silly, but Wilde does her best to sell it.  She is also perfectly okay as the murderous monster in the final act, even if there’s no real understanding of why she’s doing what she’s doing.

But it’s the in the middle where Wilde truly shines, as Zoe attempts to bring herself being back into focus after she is first resurrected.  There’s a panic and an almost feral nature in Zoe at this point, just under her skin– you can see it in Wilde’s eyes and her body language, as she tries to keep her composure.  This unfortunately short span of the film was the only time it truly worked, because while Zoe loses her battle to keep her sanity, dealing with what is likely the worst case of PTSD imaginable, a sense of dread surfaces among her friends, as they realize that now that they succeeded in bringing her back to life… they have no idea what to do with her next.

I would have loved to see the movie stay here and look at the horror of this situation, as Zoe struggles not to deteriorate, and her closest friends try to rationalize whether they should have brought her back in the first place… or if they should even keep her alive now.  There’s a lot of terror in that scenario, horror that would be way more unique than the slasher fare we end up with.

I tend to think there was a good story hidden in The Lazarus Effect at some point during its development.  There’s enough interesting stuff that a great, original (and really, really scary) story could easily be told from the basic premise.  And a cast this talented can’t all have just jumped on this project for a paycheck. But the lack of focus and the completely spineless decision to remain agnostic, and explain NOTHING, kills not only the debate between science and the supernatural, but with it, my interest in this movie.