Review: IT FOLLOWS Is The Scariest Movie of the Year 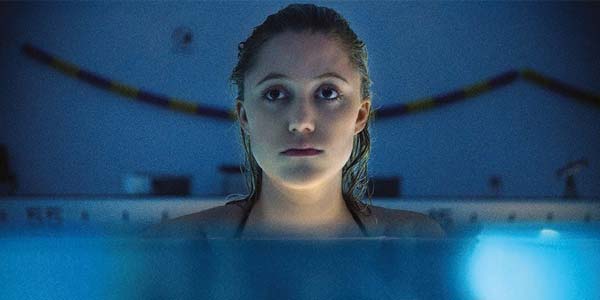 David Robert Mitchell’s minimalist horror story will chill you to the bone.

There are certainly elements of horror that are subjective– some people react to jump scares, others get more creeped out by an unsettling atmosphere, some respond mostly to tons of blood and guts.  But some horror is more primal in its scariness, simpler and yet more profound in the dread it imbues in you.  This is the kind of horror that sticks with you, long after you leave the theater, and It Follows is mired in this basic, quiet and inescapable terror.

The rules behind the supernatural horror of It Follows are established early– a malignant presence, which can appear as any number of forms, follows you wherever you go.  It moves slowly, but its motion is perpetual, and if it catches you, you die horribly.  The only way to escape this force is to pass it along to someone else, through sexual intercourse… but if the person you pass the curse along to dies, it comes back for you once more.

Our story follows Jay Height, a young college student who’s going out with a seemingly nice guy named Hugh.  Things take a dark turn after they sleep together, with Hugh explaining the curse he has transferred to Jay, before he cuts ties with her and disappears.  Jay is left confused and paranoid, with no idea whether this curse is even real, but she knows that if it is– and if any of the strangers she sees in her proximity walking toward her are this presence– she’s in trouble.  So she runs, enlisting her sister and friends to help her find a way out of this nightmare.

I won’t spoil any more of the plot of the movie than that, but trust me when I say this movie goes to some dark places in its twists and turns.  At the center of it all is Maika Monroe giving a great, nuanced performance as Jay.  Our protagonist is strong and capable, and even after her sexual encounter with Hugh, she never lets herself become a victim.  She keeps moving forward, trying to come up with new ways to escape the inevitable, horrible thing which is coming for her.  As is pointed out by her cowardly attacker later in the movie, Jay is a beautiful woman, and by his rationale, it would be easier for her to hook up with a guy to move the curse along.  But Jay doesn’t want to be a part of this game; it’s indicative of her character that she makes so many attempts to break this cycle of terror, rather than perpetuate it.  And Jay does not hide from the awful thing that happened to her, nor does she ever let it define her.

The supporting cast is great, too, especially Keir Gilchrist’s Paul, Jay’s beta male best friend who wraps up his feelings for her in his attempts to serve as her protector.  I love the chemistry between these two, especially during a scene late in the movie when Jay explains to Paul why she chose to pass the curse to a guy other than him.  That moment was the make-or-break point for Paul, truly informing who he is as a person, and I was very happy with the trajectory of their relationship for the rest of the film’s run time.

But the success of It Follows goes beyond even its stark, creepy premise and strong, likeable cast.  Mitchell has crafted a stylish, slightly retro and overall gorgeous film around this story.  Unlike the jarring jump cuts we’re used to in horror, Mitchell’s camera lingers, often longer than you feel it should, and the focus always rests on unique and arresting imagery.  Whether it’s a man with his eyes gouged out, following one of Jay’s friends into her bedroom, or the wide exterior of the car in which Jay and Hugh first hook up, this movie is filled with visuals that will stay with you.

The synth-driven score only enhances the atmosphere, while also channeling the great music that helped define late 70s and early 80s horror films.  I mean, this whole movie could just as easily have been released in that era, with its perfect mix of dialogue-heavy drama, etherial, Giallo-tinged dread, and proto-slasher brutality.  There is such a strong sense of style in the cinematography, lighting and music of this movie, it truly feels like no other horror film I’ve seen in years, and I really love it for that.

The deftest feat of all, however, is the way Mitchell handles the thematically loaded concepts within the nightmare he has created.  The nature of this curse, especially the fact that it is passed along through intercourse, makes the tale an obvious allegory for sexually transmitted diseases, AIDS, rape, and sexual assault… and yet while all these themes are plainly there, none are presented in an abrasive or expository manner.  It Follows is especially effective due to its sly subtlety, leaving you to parse out the meaning behind what you just saw on your own (and, for your sake, hopefully while not being followed).

All of these elements come together, and the end result is a thrill to behold.  If you’re tired of horror’s recent penchant for choppy, breakneck pacing and cheap jump scares, It Follows will connect with you in an entirely different, yet even more visceral way.  The laconic pace only serves to heighten the tension, and allows these characters– and the intriguing metaphors layered inside this nightmare– to breathe.  It’s all about atmosphere, making you feel the weight of the literally unstoppable dread from which these characters will never truly be free.  That is what makes this movie so goddamn terrifying.