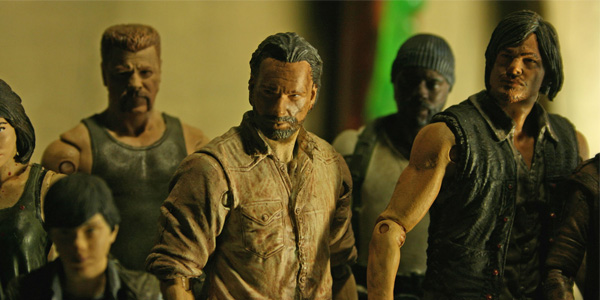 McFarlane Toys’ The Walking Dead lives on with TV Series 6, and a new batch of much-needed survivors.

As we’ve come to expect, another Fall means another wave of Walking Dead action figures from McFarlane Toys, and their latest wave really delivers, with some great new additions to the collection, including some very welcome familiar faces.  The new wave consists of five figures– three new characters– Carol Pelletier, Hershel Greene and Abraham Ford– , a new zombie and an update of our main hero, Rick Grimes.  Overall it’s one of the best lineups we have ever seen in this toy series, and many of these additions are damn near perfect.

It’s hard to pick a favorite between Abraham, Hershel and Carol… all three figures are amazing.  From scale to actor likenesses to accessories and an incredible variety of sculpted details, these are three of the finest toys in the Walking Dead collection, a high point for McFarlane Toys’ talented team.

Carol is one of our longest-running characters at this point, and her arc has been one of my favorites on the show.  Watching her transform from a meek and permanently vulnerable abuse victim, to a strong and capable leader, to a badass who could easily rival Daryl or Michonne has been a thrill, and I am very glad to see her finally get the toy treatment.  The Melissa McBride portrait is very nice, and the paint actually accentuates the likeness as opposed to burying it.  Carol’s figure wisely chooses her more recent style, based on the time of the show in which she has been the most interesting.  Carol is packed with a knife which fits a sheath on her belt, a pistol and a gas can, which even features a sculpted warning label on the side… so awesome! 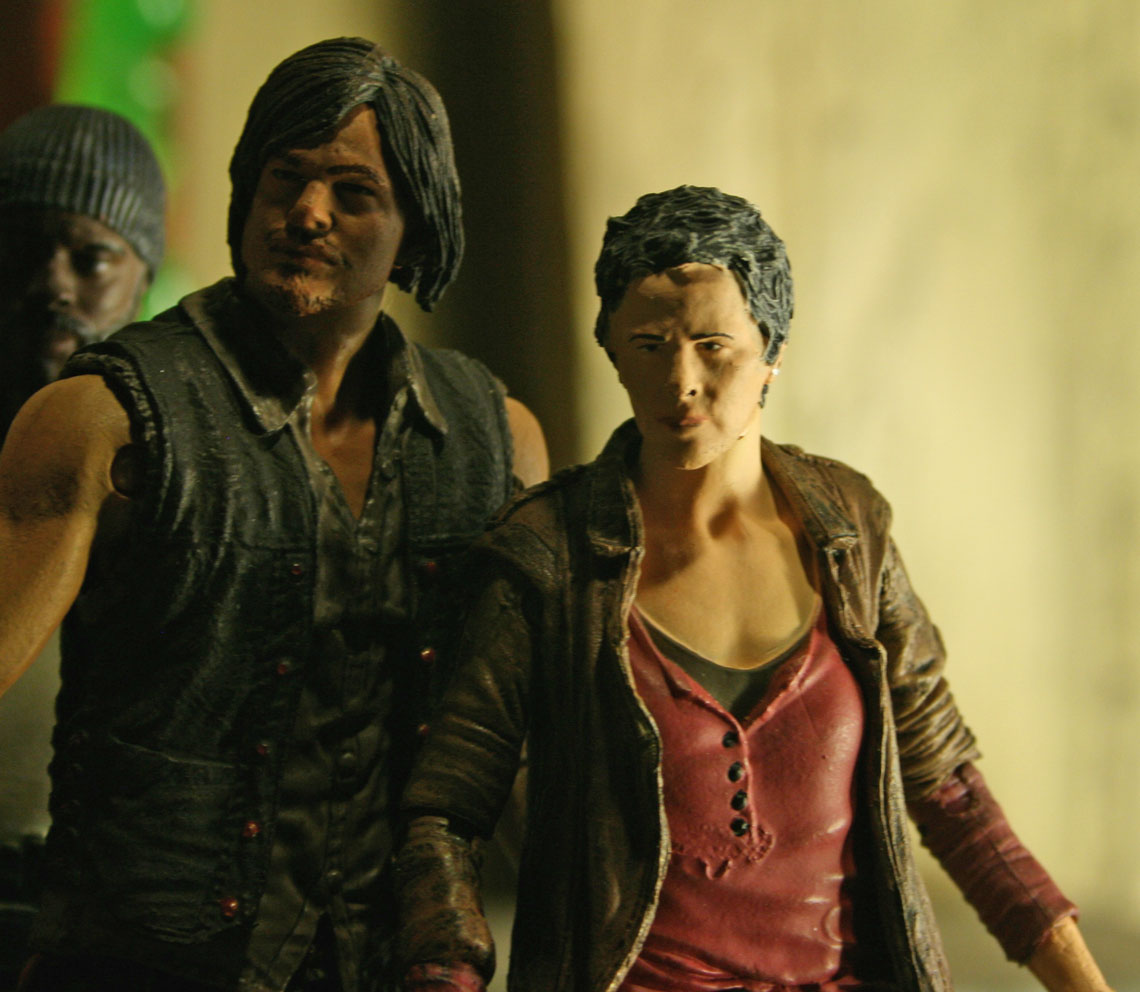 Not to be outdone, Hershel is another old schooler finally getting his due in plastic.  Rick’s former advisor looks great, and everything we could hope for is in this sculpt– an excellent Scott Wilson portrait, Hershel’s iconic suspenders, and even two swappable right legs, with and without Hershel’s prosthetic leg.  To go along with the post-zombie attack injury, Hershel also includes two crutches… but to prove that while he’s injured, he’s no pushover, he also includes a pistol which fits in a holster on his belt.

Rounding out our trio of greats is Abraham Ford, the man on a mission whose hellbent on stopping the zombie apocalypse.  I always liked Abraham in the comics, and think he’s been adapted well in the show.  Much of that is actor Michael Cudlitz’s performance, and his toy form bears an almost eerie resemblance to him.  Abe is big and stocky, and those proportions ring true in this figure, without affecting the overall sculpt, articulation or continuity between Ford and the other Walking Dead figures.  I love everything about this figure, from his camo pants to his rifle, knife and pistol, to his squared off haircut and shitkicker mustache… he’s too cool!

Rick is ostensibly our hero in The Walking Dead, and his updated figure is the first version of him to receive the modern, more detailed and better articulated treatment we’ve been treated to since Series 3.  And while the new Rick is most certainly a step up from his predecessors, he sadly still comes up short overall.  Most of it is the face– I’m not sure what it is about Andrew Lincoln, but it seems he’s one of those people whose likeness is difficult to capture.  From some angles– especially in profile– this new portrait sculpt really gets him… but looking straight-on, the likeness just isn’t there.  And the heavy dirt wash on the face is taken to an almost silly extreme, further complicating things. 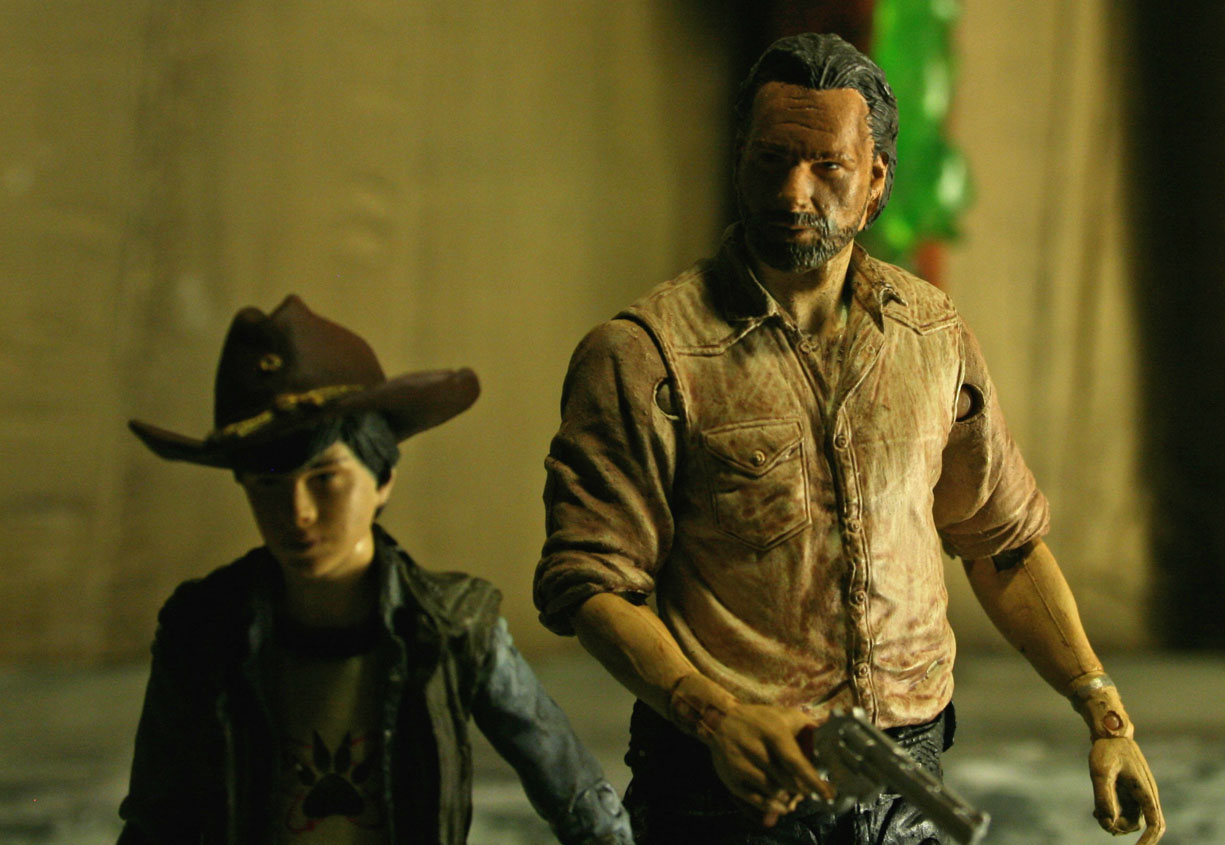 If the face sculpt issues weren’t enough of a challenge, Rick also has some weird proportion things happening, with his baggy shirt being a little too baggy and making his chest look puffy and his legs short.  Nothing on this figure is terrible, he just looks… slightly off.  That being said, there’s still things to like about the new Rick.  He’s well represented with accessories, including his revolver, a pistol with silencer, a badass machete and an alternate bandaged right hand.  And yea, if nothing else, it is nice to finally have a Rick figure with the same look and feel as his other modern Walking Dead allies and enemies.

The last figure in this lineup is the latest zombie, the Bungee Guts walker as seen in “30 Days Without an Accident.”  This is the creature who falls through the floor of the department store, only to have his intestines catch on the ceiling rafters, leaving him suspended in mid air.  It was a pretty cool effects gag, and the zombie himself came out pretty good in toy form.  Like many of the walkers in this line, he’s not as articulated as the humans– this walker only features neck, bicep, and hip swivels and (weirdly) fully articulated knees.

Once again, McFarlane’s sculptors flex their muscles in the gore department, unleashing the most bountiful, realistic and– quite frankly– nastiest looking guts I have ever seen in toy form, and the whole mass of viscera fits into the figure’s abdomen by a secure plug, allowing the guts to bear the figure’s weight easily.  I feel like more was planned for this guy, including some kind of display base from which to hang him, that never costed out.  As it stands, well, the figure can’t… and with nothing specific to hang him from he kind of just lays around.  I’m probably going to put mine on my Christmas tree, but in terms of the rest of the Walking Dead collection?  This guy can interact about as well as he did on the show, dangling helplessly over everyone’s head.

The Walking Dead toy line is still going strong, and I’m glad for that.  When McFarlane’s designers are on, they are ON– fantastic figures like Hershel, Carol and Abraham prove that.  But there’s still lots to love even in the lesser figures they’ve released, like the flawed Rick and kind of silly Bungee Guts zombie.  Neither figure is perfect, but they’re nice to have and help to more fully realize this world of walkers and survivors.

Walking Dead Series 6 first showed up at Gamestop for Black Friday, and many stores still have them available now (although for standard retail price, instead of the amazing $10 price tag on Black Friday).  A sixth figure– an update of The Governor in his trench coat– is also part of this wave, exclusively at Walgreens.  He is turning up now, so if you’re interested in him, too, it might be time to return to the drug store. 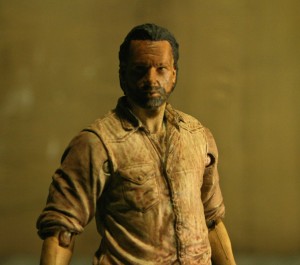 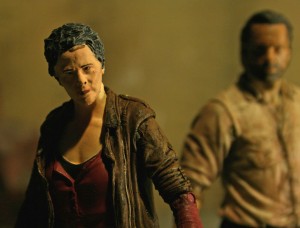 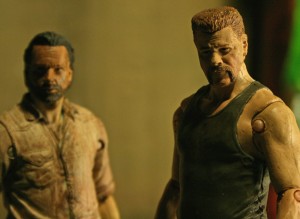 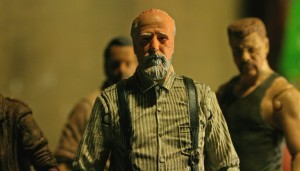 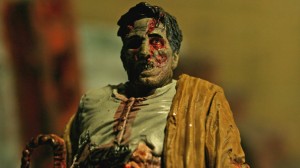 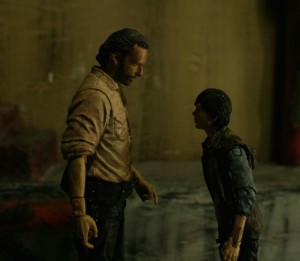 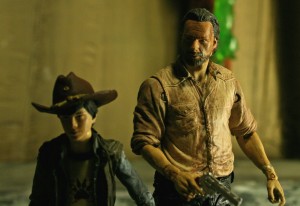 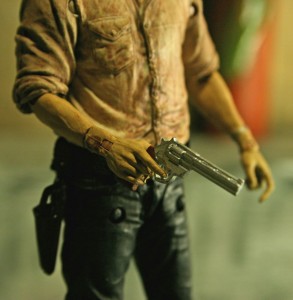 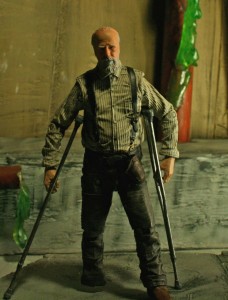 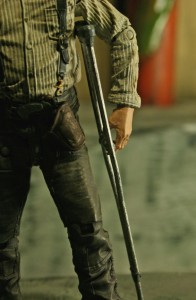 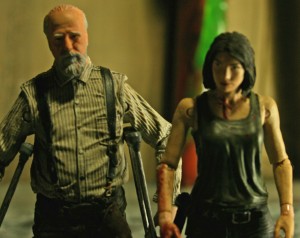 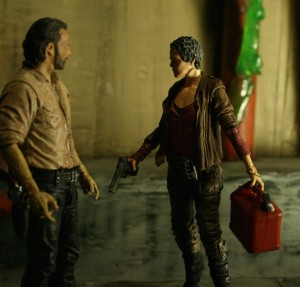 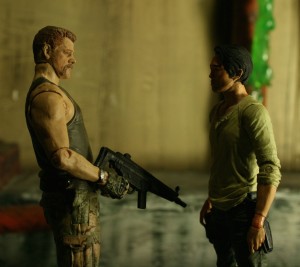 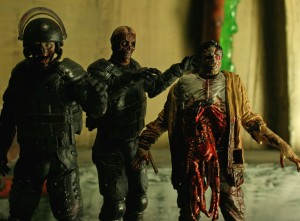 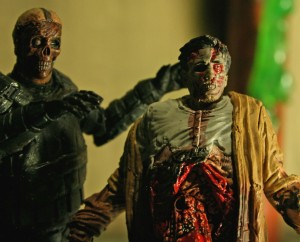 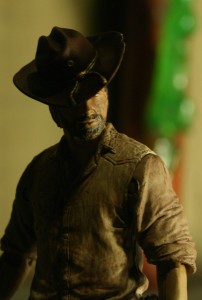 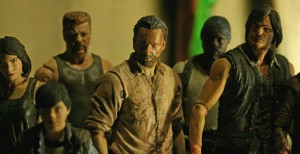 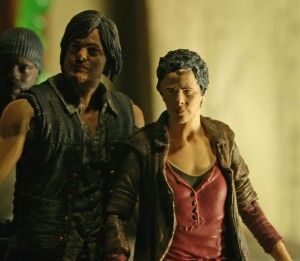 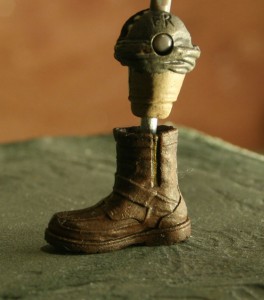