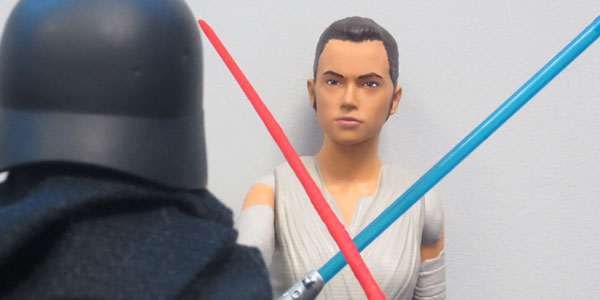 The hero of The Force Awakens gets her spot in Jakks Pacific Big-Figs toy line, at last.

There was a lot of confusion surrounding The Force Awakens‘ toy lines, due to Lucasfilm’s apparent insistence on hiding the movie’s biggest reveal– that Rey was the hero of the film.  As a result, the soon-to-be Jedi was certainly under represented at retail, especially during #ForceFriday last September.  To their credit, many of the toy partners on the film have since rectified the situation, placing Rey front and center in much of their merchandise.  One of the last companies we hadn’t seen include Rey yet was Jakks Pacific, whose Force Awakens Big-Fig series has released every other major player from the movie.  But now, they’ve released Rey, completing the core cast of the new Star Wars trilogy.

I’m happy that Rey has finally been given her spot in this toy collection, but what makes me even happier is that Jakks really nailed it with this figure.  The sculpt on Rey, in particular the portrait of Daisy Ridley, is really, very nice.  This might be the most accurate likeness we’ve seen for the actor in any mass retail toy release– you can really see her in the face.

Rey’s body is decent, but nowhere near as impressive as the headsculpt.  The costume looks perfectly film accurate, and I love the use of soft goods on the robes that drape from Rey’s belt (which move with the hip joints so as not to inhibit articulation).  But the sculpt suffers from something we’ve seen on other Jakks sculpts, a lack of realistic dimensionality around the layer of her costume.  There’s a flat edge on the side of any raised pieces like Rey’s tunic, which– when viewed in profile– look more like a step or a ledge than a layer of clothing.  From the right angle, the figure’s entire sculpt is outstanding… but from the wrong angle Rey looks a little strange. 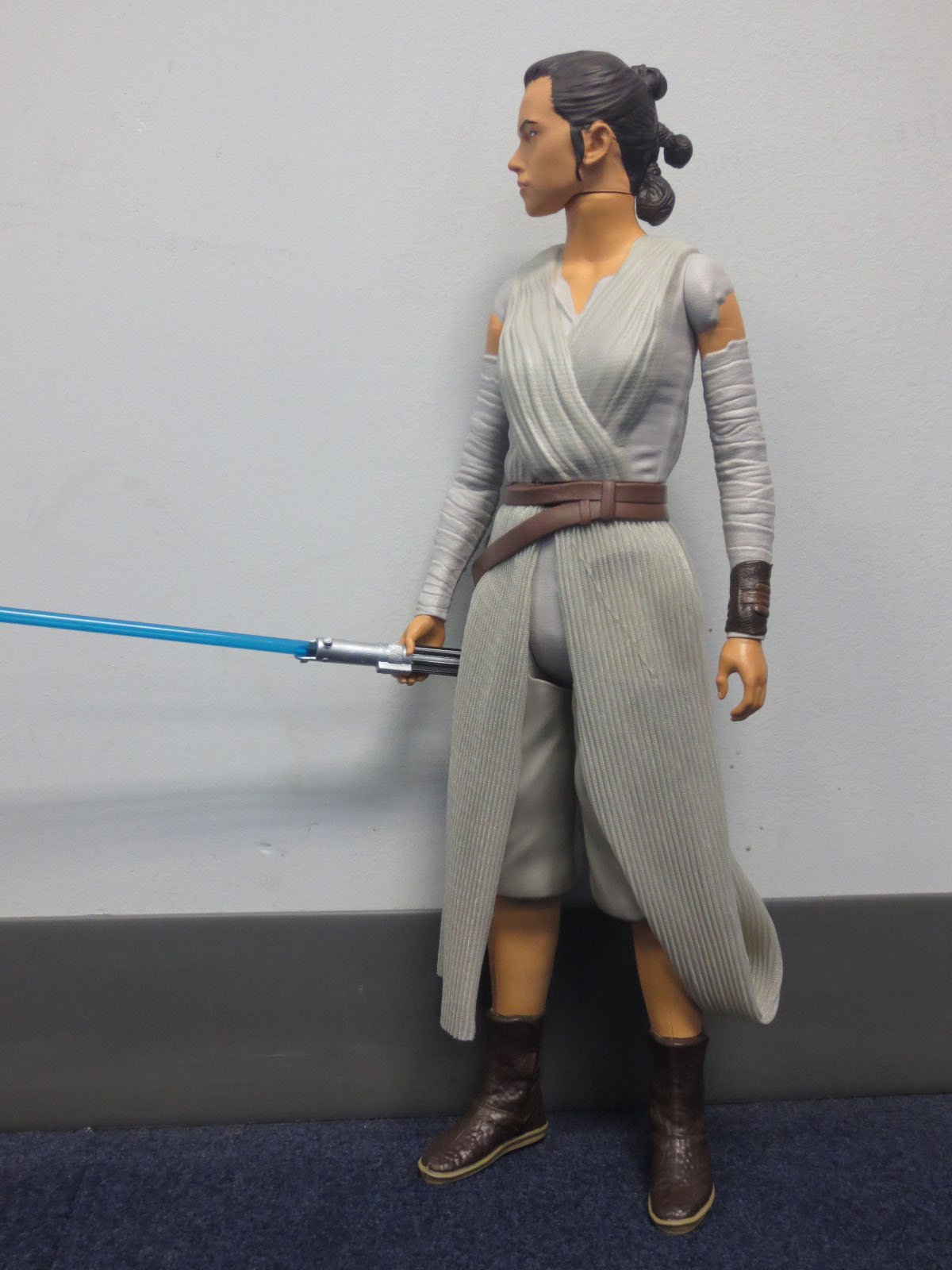 As you’d expect if you’ve seen any of the Big-Figs up close, Rey’s articulation in limited.  She includes the standard cuts at the neck, shoulders, wrists and hips.  It’s very basic, so this figure is far from what I’d call super-articulated, although I kind of like the retro aesthetic we get as a result, which sort of allows the Big-Figs to fit in with the similarly sized (yet MUCH more expensive) Jumbo Vintage figures being released by Gentle Giant.

Rey includes Luke Skywalker’s lightsaber with a removable blade as her only accessory.  It’s a great choice, and she can hold the hilt pretty well in either hand (though not two-handed, due to the limited articulation).  The blade is nice, cast in translucent plastic which makes it much better looking than Kylo Ren’s opaque red blades, although Rey’s saber seems to be on the short side.

The paint on this figure is okay, though pretty basic.  It doesn’t ruin the amazing likeness of the sculpt, which is a good thing, but it’s very much in line with what we see on most mass market toys these days, with little shading, washing, or nuance.

For me, I can’t hold the limited articulation or paint apps against this figure, as they’re in line with what we’ve seen from this line in the past, AND they certainly carry on the vintage/ retro charm much like the smaller Kenner toys from the 80s.  My only legitimate issues with this figure are the too-short lightsaber, and the fact that Rey is a little too big to fit in with the rest of the Big-Figs.  She and Finn look pretty good together, but she stands eye-to-eye (or eye-to-visor?) with Kylo Ren, when he should have a considerable bit of height over her.  Even with this wonkiness of scale, though, Rey is hands-down the best sculpt in Jakks’ Star Wars Big-Fig collection.  That alone should make her a must-own figure for anyone into the Big-Figs, or anybody looking to expand on their Rey toy collection.

Look for Rey at Target and Wal-Mart stores now.  As we get closer to #ForceFriday this September, she should start popping up at even more retailers. 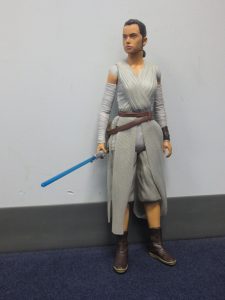 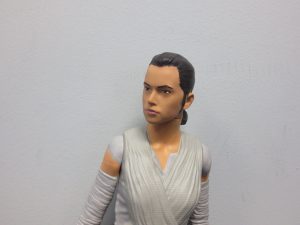 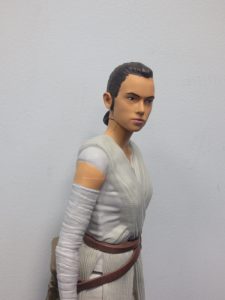 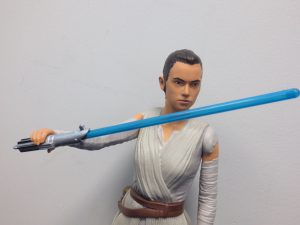 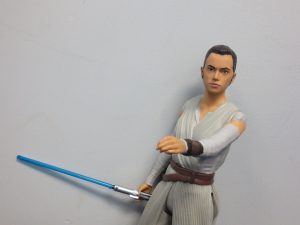 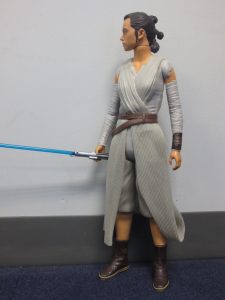 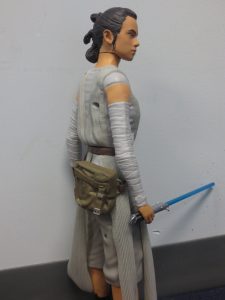 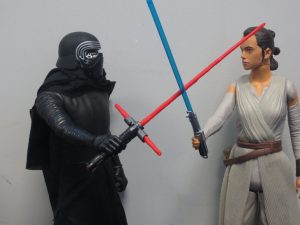 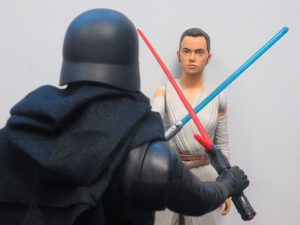 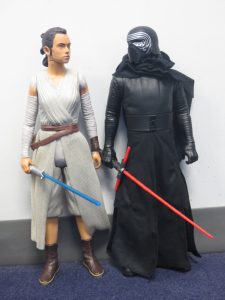 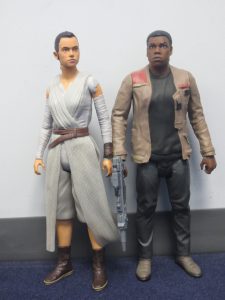 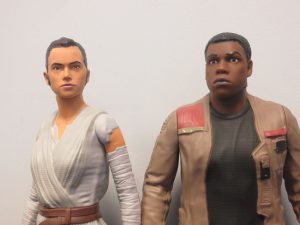