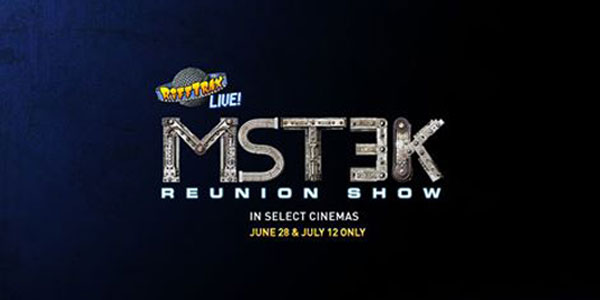 This is, like, the biggest MST3K news in a long time!

I love RiffTrax. I love Mystery Science Theater 3000.  And now, the twain will reunite next week for a live broadcast!  Michael J. Nelson, Kevin Murphy and Bill Corbett of RiffTrax fame are teaming up with MST3K alums Joel Hodgson, Trace Beaulieu, Frank Conniff, Mary Jo Pehl, Bridget Nelson… as well as Jonah Ray, who will host the new MST3K relaunch in 2017.  This is pretty much the most complete cavalcade of MST3K all-stars ever assembled for one event!

Get all the details below, and pick up your tickets at RiffTrax.com/tickets.

In just one week, catch the hysterical live broadcast of RiffTrax’s MST3K Reunion Show – set to be shown live in select U.S. movie theaters on June 28 at 8:00 pm ET/ 7:00 pm CT and tape-delayed to 7:00 p.m. MT/ 8:00 p.m. PT, followed by a special re-broadcast on Tuesday, July 12 at 7:30 p.m. (local time). Come celebrate 10 years of RiffTrax with the guys who make movies funny (Michael J. Nelson, Kevin Murphy and Bill Corbett) for an amazing night of riffing and comedy with most of the original Mystery Science Theater 3000 stars.

Joining Mike, Kevin and Bill from the State Theater in Minneapolis will be your favorite MST3K stars: Joel Hodgson, Trace Beaulieu, Frank Conniff, Mary Jo Pehl, Bridget Nelson and the host of the revived MST3K, Jonah Ray. The cast will riff on a cavalcade of goofy, educational short films and comic interludes before concluding the evening with a grand finale “SUPER RIFF-A-PALOOZA!”

Tickets for MST3K Reunion Show can be purchased online at www.FathomEvents.com or at any participating theater box offices.

For a complete list of theater locations visit the Fathom Events website (theaters and participants are subject to change).