Rise Of The Guardians Will Drive Kids Crazy 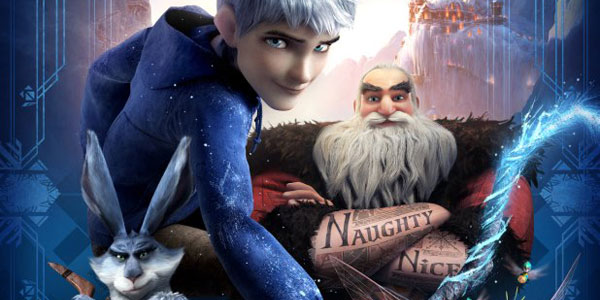 Rise of the Guardians is an entertaining, visually stunning animated feature that’s aimed directly at kids– and I don’t mean that as an insult.

When I first heard of Rise of the Guardians, I was pretty hesitant– I saw the images of a tattooed Santa and an Australian boomerang-wielding Easter Bunny, and it felt exactly like the typical Dreamworks animated feature, a “clever” twist on a classic story, for its own sake.  The only reason I held out hope Guardians would be better than some terrible Shrek knockoff was Guillermo Del Toro’s hand in the project as producer.  Not only is Del Toro an awesome director, he previously produced the Kung Fu Panda films, which are the high mark of Dreamworks’ animated movies in my book.

I’m glad I kept my faith in Guardians, because what I saw was a solid, fun movie whose twists actually were clever, and somehow all the flourishes, quirks and liberties taken with these mythical characters actually worked.  Rise of the Guardians is essentially the holiday legends cast as The Avengers, a super-team consisting of Santa Claus (North), The Bunny (Easter’s main rabbit), Tooth (the leader of the Tooth Fairy network) and Sandy (the Sandman), and charged with keeping hope and dreams alive for the children of the world.  The team gets an unexpected new addition in Jack Frost, a younger mythical being who feels frustrated kids don’t believe in him the same way they do North or his allies.  Frost doubts whether he belongs on a team of the biggest legends in history, and what we get is a basic “rise of the hero” story as Jack goes from reluctant troublemaker to genuine hero and trusted ally for his fellow legends.

The major threat that brings the Guardians together is Pitch, the boogeyman, who is warping dreams into nightmares in an attempt to dissolve the hope and joy out of kids everywhere.  Pitch is a mirror to Jack, having experienced the same upbringing as a being people no longer believe in, thus making him invisible to the human world, unlike the beloved North, Bunny and Tooth.  In Jack, Pitch sees a fellow invisible force, one that he feels could give him the edge in his war to twist and darken the lives of the world’s children.  There’s never any real risk of Jack joining the villain, but Pitch is able to prey upon Frost’s own doubts and shake the faith of the other Guardians in their new recruit.

What really makes Rise of the Guardians a fun experience is the perfectly-realized world of these mythical beings.  The character designs are quite striking, and very reminscent of Del Toro’s own fantasy films, from the shimmering scales of the Tooth Fairy, to North’s unsung heroes the Yeti, and Pitch’s menacing nightmare steed.  Each icon lives in their own fantastical world, populated by cool creatures and equally impressive visuals.  North’s toy factory at the North Pole is populated by both ineffectual elves and the Yeti, while Tooth’s worldwide network of tooth-gathering fairies is given its own clever backstory (the teeth the fairies collect house kids’ fondest memories of childhood).  Bunny’s lush green hills, meanwhile, feature underground tunnels and marching multi-colored eggs; each world is wonderfully unique and a joy to spend time in.  And we spend time in each, as Pitch targets the Guardians’ operations one by one, in an attempt to discredit them in the eyes of children.  This leads all the Guardians to work together to fulfill each one’s legendary duties, the most fun of which is definitely the thrilling rooftop competition as each Guardian attempts to collect the most teeth when Tooth’s fairies are captured.

The worlds of these icons are very inventive, and I love the childlike concept behind each– the backstories and worlds assigned to these timeless legends feel like something a super hero-loving little kid would dream up.  Even the sillier aspects like North’s tatt’s feel like they came directly from a kid playing GI Joe in the sandbox, and I loved that.  So did the kids I saw this movie with– almost half the audience at my screening were ten or younger, and they were eating up every moment of this movie.  It was a wise choice to keep the story very simple, because this gives the audience having the chance to bask in the imagination on display in this practical take on the biggest legends of childhood.

Rise of the Guardians is very entertaining, an immersive and consistently clever film, that never panders or knowingly winks at its audience.  It’s a warm-hearted tale that puts a refreshing spin on the most iconic of all legendary characters, and does an amazing job of realizing their world.  The best part of the film is the authenticity of is child-like concepts… this movie was made FOR kids… BY adults that never lost that wild sense of imagination.  Rise of the Guardians made me feel a spark of pure, youthful imagination, and I’m confident it’s going to connect with kids even more profoundly.