Can Robin War Break the Curse for DC? 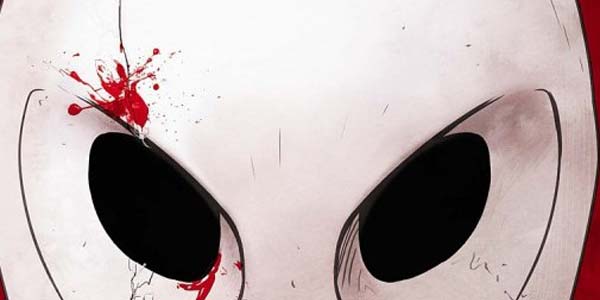 DC has had a string of bad luck when it comes to BIG events in their comics. Can Robin War break that bad taste Convergence left in our mouths?  I think it will.

Many people find it hard to follow events leading up to a big crossover event because there are so many comics and few of us have the disposable income to follow.  The Bat-titles you have seen the board set up for the Robin War for about two months now, and if you have not been in the loop allow me to catch you up. Warning you now there will be some spoilers in here…

Bruce has a form of amnesia and has lost his fortune. Jim Gordon is Batman (playing him in a huge exo-suit).  Dick Grayson is Agent 37 working for a spy agency called Spyral. Damian Wayne has been on a crusade with his resurrected mother. Tim Drake (depending on which title you read) is still Red Robin. Jason Todd still has a chip on his shoulder (but has become more of a replacement to Nightwing since Grayson’s exit).  And let us not leave out the crew from the We Are Robin book… there are more characters in play but they are the main Robins we want to focus on.

Robin War issue one starts out with one of the We Are Robin kids trying to foil a crime and it goes wrong. This action has a city official make a law branding all Robin attire or people acting as the hero illegal. Jason and Tim get into a discussion about this law and these kids acting as Robin. Since Capullo took over writing Batman we have yet to fully understand Tim’s place as a Robin and within the dialogue Jason Todd lets everyone know what that stance is. 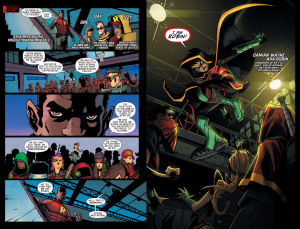 It is then revealed that Damain is in fact back in Gotham and he crashes the meeting that the Robins are having. A fight ensues as Damian proves that these kids are poorly trained and need to not do what they are doing. Gordon is tipped off of the brawl and is sent in to arrest the Robins, setting up Damian’s first tussle with Gordon as Batman.

In the background we see the council woman who is meeting with a mysterious group of “masked” aristocrats. The cover of the book tells you who they are so it is no mystery that the Court of Owls is back. They want to start a war and they are looking for one Robin– they call him “the Grey Son” and they want to resurrect the Nightwing.

The story is written by a bunch of writers in the DC stable lead by Tom King. The art is on point and while usually so many hands in the cookie jar will end up with some messes, here the art is stunning and very well done. There is a few frames of the Batbot Batman that are not perfect, but far from terrible either.

Is this how DC brings back Nightwing? Is this the end of the silly spy games Dick Grayson has been playing? Will this bring Bruce Wayne Batman back? What are the Owls really trying to accomplish here? There are a ton more question right nows, but it seems that DC may break the streak of bad crossover events with this one…I hope. JQ gives this issue a 9/10. 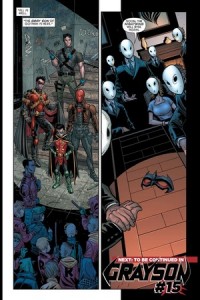