RoboCop Misfires On All Cylinders 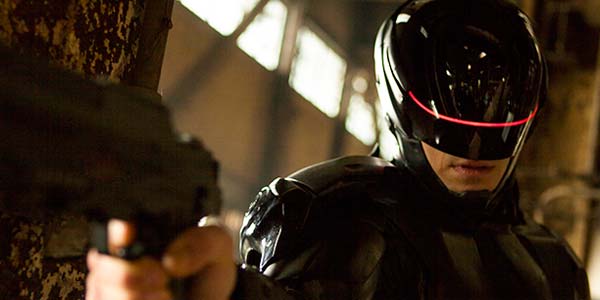 The new RoboCop puts a very strong focus on the conflict between man and machine, so it’s fitting that the film itself struggles with its own conflicted identity– is it a philosophical study on drone warfare, or a shoot ’em up action movie?  The movie tries to be both at once, but the end result is a messy story that fails to connect on an intellectual level, while falling short of delivering as a straight-up action movie, as well.

Let’s get this out of the way– the RoboCop remake is not terrible… it’s just not terribly good, either.  There are moments in the first act that show the promise talented director José Padilha brings, and the makings of an intriguing new take on the cyborg hero.  The remake wraps RoboCop around the concept of drones, and the value of human conscience in regards to technology and weapons and war.  Things start promising, as an unmanned OmniCorp robot (specifically the familiar ED-209)– on a peace-keeping mission in the Middle East– ends up killing a child.  This PR nightmare sparks the program that will ultimately create RoboCop, a second chance for critically injured Detroit cop Alex Murphy… a fresh take on the original RoboCop origin that had potential.

Unfortunately, that potential begins to burn off almost immediately.  While the death of the kid brings to light the dangers of fully automated warfare, it does so in such a sanitized, bloodless way the scene loses most of the impact it could have had if not for the movie’s PG-13 rating.  The murky, unclear statements the movie tries to make are even more exaggerated thanks to Samuel L. Jackson’s role, as a conservative talk pundit whose pro-drone rants are so heavy-handed and plodding, they stop the movie in its tracks completely whenever we cut back to him.

The messiness bleeds into Alex Murphy’s story as well, cramming in far too much focus on his family (who are given nothing to do but pine over their lost/ returned loved one), and a half-boiled police corruption subplot that forces us out of the internal turmoil of Joel Kinnaman’s cyborg hero at every turn.  I’m not sure I would want to watch a RoboCop movie in which our hero cries the first time he sees what he has become, but that stuff is at least original, a fresh take on the character.  But after these brief introductory scenes, we are met with a litany of board meetings of the evil (but not actually evil) OmniCorp executives, and Murphy’s family, while RoboCop gets ready to run through the motions of revisiting the various scenes and set pieces we all loved from the original.  The movie is too slavish to the beats of the first film to ever be its own thing, but too clunky and self-serious to match the perfectly reckless and satiric edge of its predecessor.

Kinnaman is good with what he’s given, selling the plight of this man turned into a death machine against his will.  But every time he begins to explore his state of being, he’s simply conveyed into the next action set piece or massive, bizarrely staged gun fight.  The rest of the cast doesn’t fare much better, despite the best efforts of welcome faces like Michael Keaton, Jennifer Ehle and Jay Baruchel as the CEOs behind the new cyborg hero.  The movie’s attitude toward these execs is as confused as everything else– they’re not really villains, until late in the film when they are suddenly pigeon holed into that role to give the film a standard action climax.

The new RoboCop clearly suffers from too many cooks in the kitchen.  Director Padilha had remarked about his frustration making the film, and the script went through multiple massive rewrites.  The result is a movie with no focus, one that will spark interesting ideas, and then immediately snuff them out or ignore them in favor of stock Hollywood action and non-essential sub plots.  The film jerks and bucks all over as it struggles to figure out its own tone and what statements it wants to make, but it gets so lost in itself that the end result falls flat on all counts.  The video game-esque action is muddled and often forced into the story, the side characters get far too much focus, only to be bent into different people entirely when the story demands it, and any deeper themes or thoughts brought up are lost in the crossfire.

I knew walking in that the new RoboCop would not be the same as the original, I had come to terms with that well in advance.  The intriguing ideas of the benefits and evils of drones, and the higher concept, man vs. machine ideas of the first half gave me some hope the new film would blaze its own path, but it ultimately lacked any impact, as much a slave to its remake status as RoboCop is to his OmniCorp masters.  I cannot really recommend the new RoboCop, but I will say that its messy narrative and conflicted themes gave me a new appreciation for the razor sharp, on-point original by Paul Verhoeven, and inspired me to watch that classic as soon as I got home from the theater.  So it wasn’t a total loss.