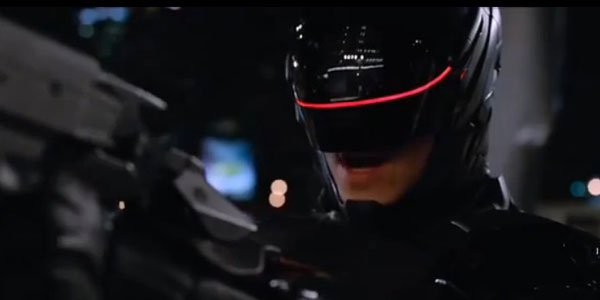 The Robocop rehash is happening, and it’s happening all over you.

Let’s get this out of the way first– the original Robocop is a total classic, probably one of my favorite movies of all time.  It’s so sharp, so smart and so insanely watchable that nothing can tarnish (or rust?) its impact.  Not two terrible sequels… not the incredibly lame TV show… and not this new remake, which seems to take the original Robocop story, circle all the most iconic moments in red pen, and then dial them back in intensity by about 40%.

Yes, everything we’ve seen from the new Robocop movie thus far has kind of fallen flat on its face, from the goofy viral marketing campaign to the constant question of what this remake could possibly bring to the table (aside from a well deserved paycheck for the awesome Joel Kinnaman).

Well, now we have our answer, thanks to the first trailer– by all accounts, Robocop will deliver ALL the lowered expectation action we assumed, along with some truly bizarre appearances by the likes of Samuel L. Jackson and his hair, an aged Gary Oldman, and Michael Keaton as apparently every studio designer in Hollywood, circa the early 2000’s.

I’m not saying the movie looks good, but it does look so ridiculous I can’t imagine myself not seeing it opening night.  I will say, after much debate of the meaning of Robocop’s human hand, this trailer assures me it will have no farcical, satirizing context.  They’re really gonna play it straight, that it’s Robocop’s connection to humanity. LOLz.

Robocop happens to us in theaters this February.