Rocky Round Two Is Another Direct Hit 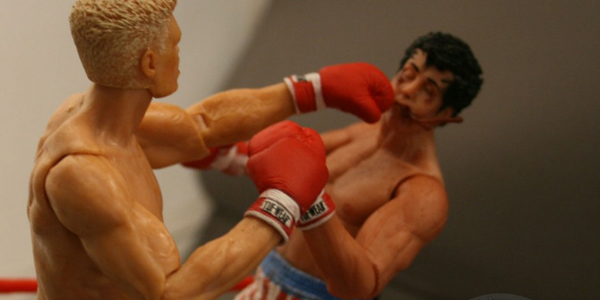 Rocky gets a second wave of awesome action figures, courtesy of NECA. This rounds delivers a new Rocky and his Soviet opponent Ivan Drago, both from Rocky IV, and the new toys really do justice to the much-loved (and frankly, pretty absurd) fourth movie.

There’s a small list of movies that are so quintessentially 80’s, so tied to the weird and particular magic of that decade that, had they been released at any other moment in history, would never be remembered as fondly as they are.  Rocky IV is the perfect example of this phenomenon, recalled as one of the high points of the series by 80’s kids like me, when in truth it’s pretty bugnuts ridiculous. By the fourth installment, the realistic drama of the early tales of the Italian Stallion were gone, replaced instead by a generous helping of montages (yes!), some manufactured pathos with the hammy death of Apollo Creed, and an end fight that’s as thrilling to watch as it is stupid– Seriously, only in the 80’s could Rocky have single-handedly ended the Cold War by punching a guy.  I love it, and based on the quality of NECA’s latest Rocky action figures, they do too! 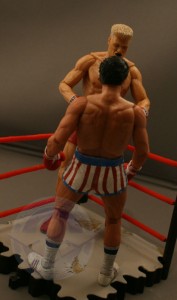 I think it’s a wise move for NECA to jump around Rocky continuity– their first wave of figures was based on the original movie, and now Wave Two brings an updated Rocky and the inhuman Russian fighter Ivan Drago, both from the fourth movie. IV is definitely the most “cult classic” of the Rocky series, and I could not wait to get my hands on the flag-trunked Balboa and Drago as soon as possible.

These figures don’t disappoint– much like the first series, the sculpting on both fighters is absolutely perfect, with some excellent portraits of both Sylvester Stallone and Dolph Lundgren.  From the headsculpts to the sinewy, bulging muscles on both fighters, these figures are very authentic to the on-screen appearances of both characters. I think it speaks to NECA’s commitment to accuracy that this Rocky is an all-new figure, to match Stallone’s more chiseled (and less hairy) physique from the fourth movie. Both figures also feature the wonderful articulation pattern from Wave One, which offers plenty of realistic pugilistic poses thanks to the combination of great ball necks, ab crunches and liberal use of joints on the arms and legs. Like last time, the figures’ trunks are a soft rubber overlay, which masks the hip articulation while still offering a decent range of motion, and the result is a seamless merging of sculpt and clever engineering. 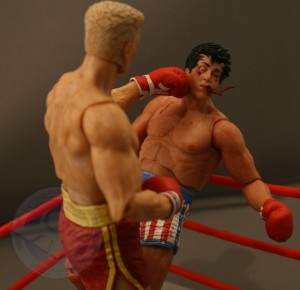 Also carrying over from the first series is the “battle damaged” variant concept. Drago is available both neutral, with yellow trunks and with a beat-up face and red trunks.  Both looks really good, but with a line like Rocky, I feel I’d be remiss to get a boxer figure and not have him beat to Hell. Both takes on Rocky feature the Italian Stallion in his stars ‘n stripes trunks, and while his neutral figure looked plenty good, the beat up Rocky of this go-around is so cool there’s no way to not get him.  Rocky is sculpted mid-punch… on the receiving end!  From the indent on his cheek to his swollen eyes and the subtly windswept hair, I’ve never seen a toy that captures as much “OUCH” in a portrait than this guy.  The icing on the cake? NECA even added a “blood spit” streaming out of Balboa’s mouth (not unlike the head exploded variants in their Gears of War series), which adds to both the wonderful sense of movement displayed here and the overall COOL factor.

The Rocky series is one of the classic film series, and NECA’s toy line continues to impress, really doing justice to these legendary characters. Rocky IV was always a big one for me, personally, and I’m glad to say I can’t be happier with how cool both Rocky and Drago came out. All four new figures are available now at retail.  Based on what I’ve seen, if you see “Blood Spit” Rocky, pick him up while you can… he’s been flying off the shelves! 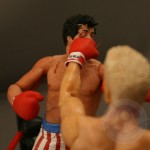 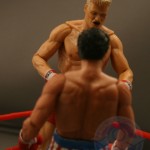 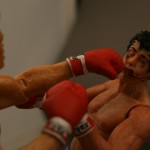 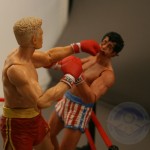