Round For Round, The World’s End Is One Of The Summer’s Best Movies 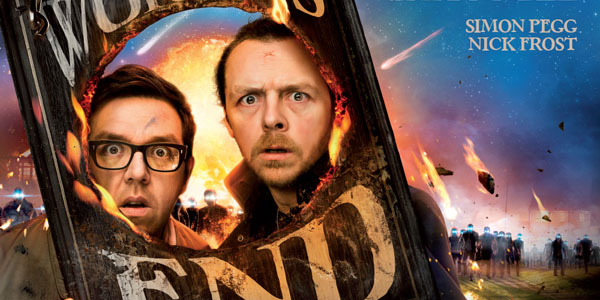 The World’s End is a great movie, that wears its beer on its shirt, blue blood on its hands, and its heart on its sleeve.

Edgar Wright’s The World’s End closes out his so-called “Cornetto Trilogy,” reuniting Simon Pegg and Nick Frost for a third story that feels like a thematically satisfying closer to their previous films Shaun of the Dead and Hot Fuzz.  While it doesn’t attain the death defying heights of comedy as those two movies (at least, not on first watch), there’s a charming sweetness to this third chapter that feels more personal than its predecessors.

The basic story of The World’s End is straightforward– Gary King (Pegg), a loser with a serious case of arrested development, convinces his four childhood mates to return to their hometown of Newton Haven to complete a 12-stop pub crawl along the town’s “Golden Mile,” a feat they failed to finish in their younger days.  The rest of the gang– Andy (Frost), Oliver (Martin Freeman), Steven (Paddy Considine) and Peter (Eddie Marsan)– have all grown up and settled into middle aged complacency, with families, steady jobs and no real desire to return to their long-forgotten home town.  But one by one, Gary convinces them to join him, and the “Five Musketeers” are on their way home.

Unfortunately, things don’t go very well, as the increasingly inebriated crew comes to discover the town has changed in very literal ways– namely, many of its residents have been replaced by mysterious blue blooded automatons, who have a secret and menacing agenda for our heroes.  That’s all I’m willing to say about the plot of The World’s End… it takes its time ramping up the sci-fi/ body snatchers angle, giving plenty of opportunity to live with the former friends and their shared– and separate– histories.  With less sharp characters and lower quality dialogue, the first half of this film would honestly be a slog, but each of these guys is incredibly well realized and their dialogue is as on point as we’ve come to expect from a duo as talented as Wright and co-writer Pegg.

None of these characters, especially Pegg and Frost, feel like rehashes of their previous iconic performances.  Pegg’s Gary is a very different type of loser than Shaun, a man completely obsessed with reliving what he considered to be his last good moment in life.  He’d be a tragic figure, if not for his utterly pitiful buffoonery (including his incessant drive to continue the Golden Mile, no matter how dangerous the environment gets).  And his miserable existence would make him unlikeable, if not for the Han Solo rogue’s streak Pegg imbues into him.  Yes, Gary’s behavior, life and very existence are completely pathetic, but there’s a charisma to him that makes you believe his hesitant former friends being coaxed back to complete their 20-years-past due pub crawl is something more than a plot device.

What I found interesting about The World’s End is that even though Gary is the catalyst of the story, in many ways he’s not the star.  That role goes to Frost’s Andy Knightley, in what is without a doubt the best performance we’ve ever seen from the actor.  Andy is our surrogate, as frustrated as we are at Gary’s juvenile and incompetent antics, but there’s also a rage inside the former wild man that’s a joy to watch when he finally reaches his breaking point.  Andy gets many of the film’s best action beats and most laugh out loud funny scenes, as well as a great arc, in which his seemingly perfect suburban existence may not be all it’s cracked up to be.

The rest of the gang is equally well rounded, each with an arc of their own as they discover themselves and confront their own mixed feelings with their hometown and their past– a love/ hate sentiment that no doubt rings true to many of us.  Wright manages the characters incredibly well, mixing in Rosamund Pike as Oliver’s sister Sam, the love interest of both Gary and Steven, and by the time the threat of the evil robots comes full force, we are fully invested in the continued well being of everyone involved.

Once the action does rev up, it escalates fast and furious… and doesn’t stop until well after the truly outrageous finale, all the way into the epilogue that feels like the connective tissue between this film and its previous two cinematic soulmates Shaun and Fuzz.  Wright proved his amazing aptitude for action with Scott Pilgrim, and there are amazingly well crafted sequences throughout The World’s End which feature that same kinetic energy.  As the mystery of the robots– or Blanks, as they’re referred to– unfurls and the situation in which our gang finds themselves gets increasingly outlandish and deadly, the pacing of the movie winds through the twists so confidently, so organically, that by the time the final confrontation takes place, you can hardly believe we’ve already reached the end.

The World’s End has a lot to say, despite its outward silliness.  You can never truly go home– everything changes over time, and it’s a mad and futile quest, to try to relive the past.  That sense of ostracism permeates through the entire film, and offers an interesting new take on the battle against the collective seen in both Shaun‘s zombies and Fuzz‘s Sandford Neighborhood Watch.  All the other shared nods, references and fetishes from the other films also show up again, from the fence jumping gag to lines of dialogue, the omnipresent twin characters and, of course, a Cornetto cameo… each indulgence feels familiar and charming, well woven into the story rather than being jammed in as fan service.

I had a great time with The World’s End— it’s smart and filled with great characters worth caring about.  From the creators of classics like Shaun and Hot Fuzz, that’s not so much a surprise as a reassurance.  But what makes The World’s End stand on its own are some genuinely surprising twists and turns in the third act (seriously– avoid spoilers, and enjoy watching it all play out firsthand!!), and some thematically interesting morals that hit home while feeling very left of center.  The movie’s sci-fi trappings are well crafted, and its comedy is often razor sharp… but the true secret weapon of The World’s End is its giant-sized heart. This is a film that will make you fall in love with life, friendship and the glorious messiness that is being human.