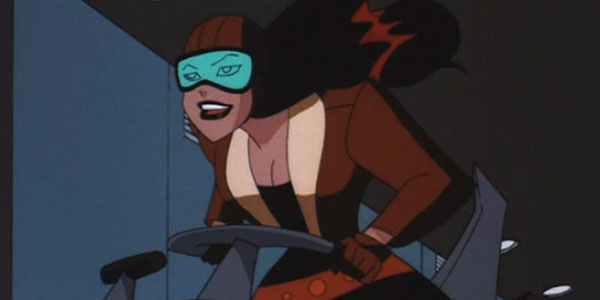 The New Batman Adventures character is joining the toy line this summer.

Over the course of the storied Batman animated series, creators Paul Dini and Bruce Timm rolled a few brand new characters into Batman’s universe, alongside the iconic heroes and villains of the comic books.  Harley Quinn is probably the most famous animated original character, but one of my favorites was Roxy Rocket.

The ex-stunt woman turned thrill-seeking thief ran afoul of both Batman and Superman in their respective TV shows, and now this pulpy addition to Batman’s rogues gallery is set to be released as the first deluxe figure in DC Collectibles’ Batman animated collection.

Action Figure Insider got the scoop on this new figure, which is only fair considering Dan Pickett’s keen detective work in recognized Roxy’s rocket in a display at San Diego Comic Con last summer.  The Roxy action figure includes an in-scale, light up rocket for her to ride, as well as a flare gun, elector gun, and a big wrench.  She’s wearing her brown leather jacket, and while what we’ve seen so far has her visor down, I would not be surprised if it’s hinged to account for one of her 21+ points of articulation.

But enough talk… Head over to Action Figure Insider to see the first image of the Roxy Rocket action figure from DC Collectibles!