Ryse: Son of Rome is a Showy but Shallow Adventure 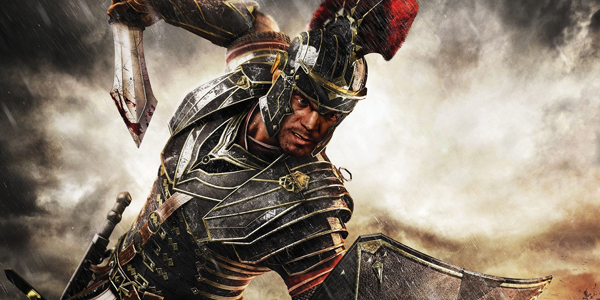 Ryse: Son of Rome has had a long, troubled development, first appearing as a cringe-worthy first-person brawler for the Kinect peripheral before being later reworked as a third-person action title for the Xbox One.  Early footage of the game, while sporting unparalleled visuals, failed to strike a note with gamers as the gameplay itself appeared to be incredibly shallow.  Now that I’ve been able to spend some time with the final product, it’s clear that, while Ryse turned out better than anyone expected, it’s a far cry from the epic experience many hoped for it to be.

Developed by Crytek, the folks behind the Crysis franchise, and published by Microsoft, Ryse: Son of Rome follows the story of a Roman soldier named Marius Titus.  As the game begins you are instantly thrust into the middle of a massive battle as barbarian forces invade Rome.  You must push through enemy forces and make his way to the palace and secure Emperor Nero.  Once there, however, Marius begins to reveal his true intentions as the remainder of the game largely plays out in flashbacks leading to that day. Rife with odd, supernatural elements and no shortage of supremely evil villains, Marius is set on a path of destruction and revenge after his family is butchered at the hands of barbarian invaders, winning the favor of the vengeful god Damocles in the process.  While the tale’s ultimate destination is rather predictable by the second act, there are a few moments where the storytelling really goes off the tracks for better or worse and took me places I was definitely not expecting. 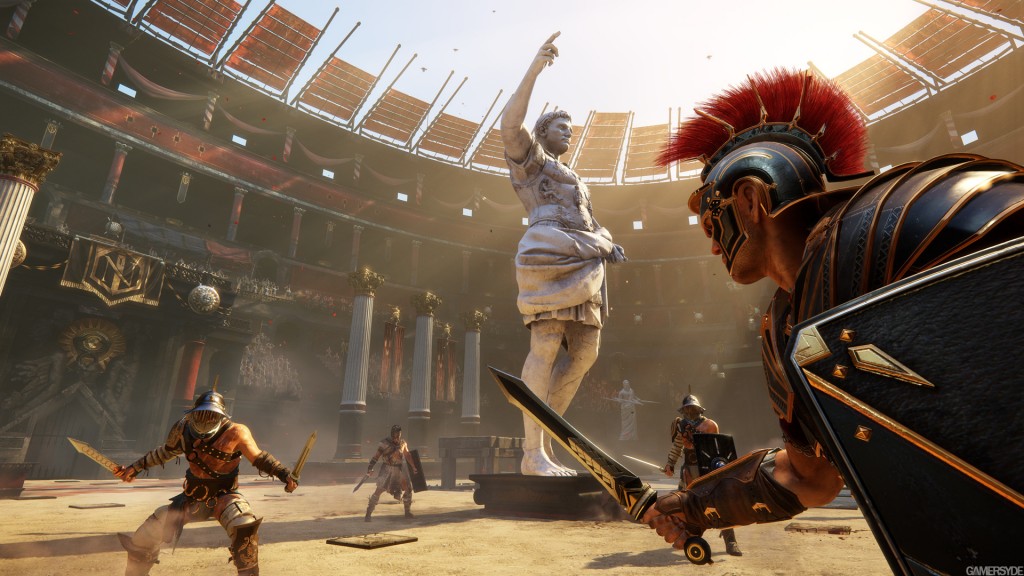 The story isn’t really the problem here, nor is the presentation or the voice acting (which is actually pretty fantastic).  Where the game truly falters is in its repetitious qualities.  Between plot points, Marius is set on an extremely linear path to his next goal, with little deviation to be made from the path the game has laid out for you.  This in and of itself isn’t necessarily a bad thing, but the game quickly wears you down when there is literally nothing to do on that path save for keeping an eye open for glowing green collectibles to grab and, of course, triggering the next combat encounter.  Combat itself consists of one attack button and one block button along with the ability to roll/dodge and push opponents with your shield to break their defenses.  The extent of any combo is to break defense and mash on the attack button, causing Marius to break loose with a series of blows from his sword – and some enemies require slightly different tactics to defeat than others.  For example, some enemies perform unblockable attacks that but be avoided or are prone to heavy attacks that they need to wind up for, requiring precise timing to block.  Unfortunately, since there are only a handful of enemies types in the game, this becomes an exercise in monotony by the second mission.  Worse yet, all the enemies of any one type look 100% identical.  Considering how pretty this game is, it’s a shame that they could not have spent more time varying character models.  It’s incredibly distracting in a game with such realistic settings to begin fighting a half-dozen carbon copies of one foe. 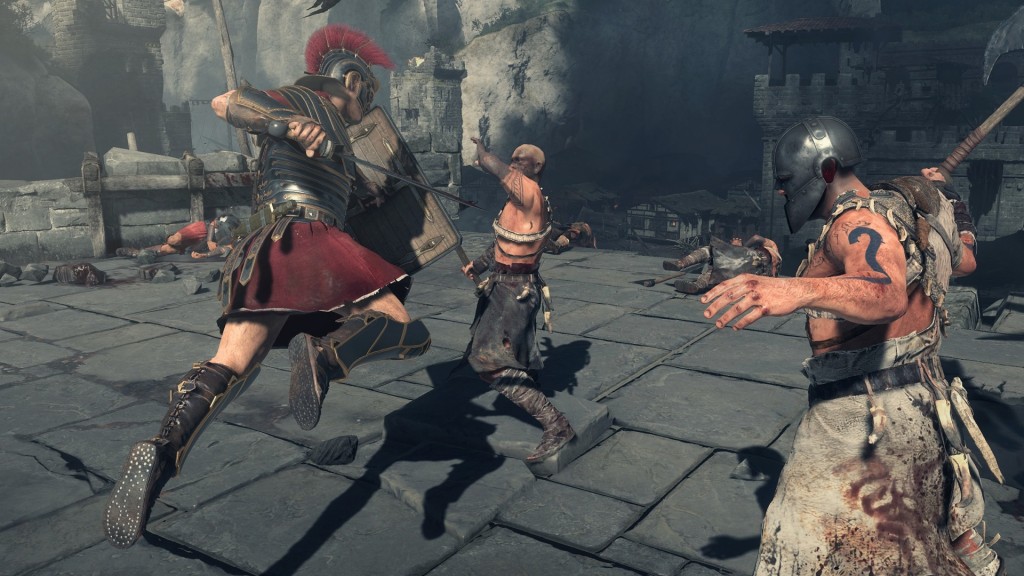 In any case, once any opponent has taken enough damage (or sometimes if they’re caught off guard by an attack) an icon will appear above their head indicating that players can quickly pull the right trigger to initiate a gruesome execution.  Time slows down to a crawl as the targeted enemy flashes either blue or yellow, referencing the color of the button that needs to be hit in order to yield the best score during the sequence.  Marius runs enemies through, cuts off limbs, and stomps in faces with little care in what are, admittedly, awesome-looking moments no matter how often they show up.  Even so, it wears immediately thin that you must wait through this sequence of button pressing ad nauseam.  For long distance combat, you also have the ability to throw javelins, with 100% accuracy mind you, seemingly thousands of feet away by using the left trigger to target far-away enemies – it’s silly but undeniably fun.  In addition, players will run into a few sections which require them to command troops mid-battle.  When the prompt appears at the bottom of the with the order “Fire Volley,” you can either hold down the left bumper to issue the command or simply say “fire volley” and the Kinect will instantly pick it up. 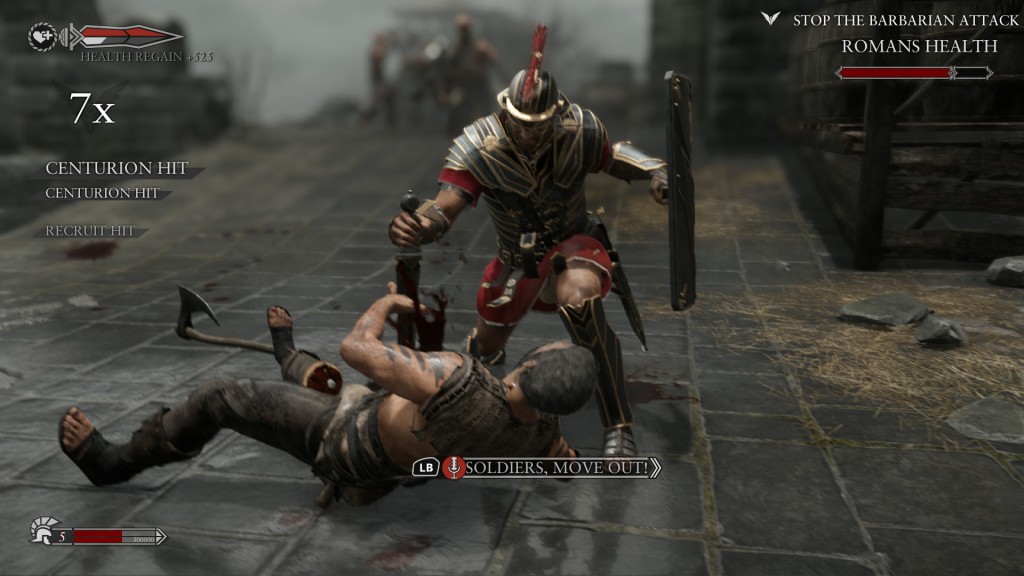 Through every enemy killed (an there are a whole lot of them) experience points are gained which players can spend on the menu screen to level up Marius’ health, carrying capacity, and various other items, which provide incremental bonuses.  Players in a hurry to level up can also pay money for these perks via microtransactions but the benefits of the small gains they offer at higher levels don’t seem to justify the asking price.  It’s also hardly worth investing into a campaign that’s so disappointingly brief.  I finished the entire campaign, on the hardest setting available, in one approximately seven-eight hour sitting.  Once finished, an additional (and frustratingly challenging) difficulty is unlocked in case players wish to go through again.  Other than that, the only other offering is a lackluster multiplayer mode in which partners can team up for co-op arena survival.  The multiplayer in this case seems tacked on and only partially realized, as is the case far too often – almost as if developers feel they need to include a multiplayer option but lack the time or resources to do it right. 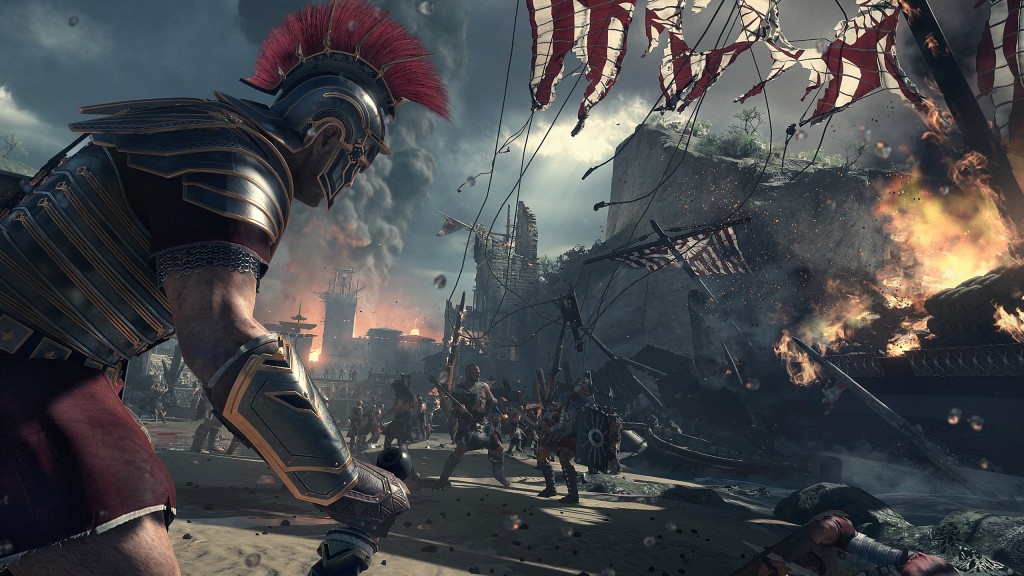 Still, strictly as a tech demo, Ryse is the most technically impressive game next gen consoles currently have to offer.  It’s impossible to overstate just how good this game looks – and it’s only running in 720p at 30fps to boot.  The facial animations particularly are the best I’ve ever seen in a video game, bar none.  Nero’s fiendish sons Basilius and Commodus are animated in such a realistic, believable fashion that you almost want to reach through your television and slap them, but are instead staring in awe that what you’re watching is blurring the lines between game and film.  Rome’s architecture is astounding throughout and the way light bathes the atmosphere is nothing short of incredible.  Make no mistake; if you’re looking for a short-lived distraction that offers tons of eye-candy and the entertainment equivalent of a popcorn movie, this is your game.  Kudos to the designer and development team for using ancient Rome as a backdrop as it was a refreshing change of pace from the setting of most titles, but the game is unfortunately loaded with missed opportunities.  With top-notch voice acting and visuals, a more fully-realized campaign and fleshed out combat system could have made Ryse: Son of Rome a title to remember, instead of one doomed for the bargain bin.