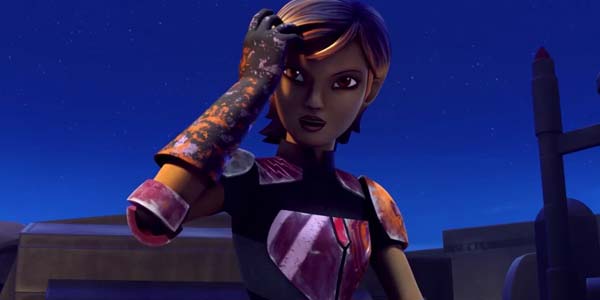 Hasbro’s Star Wars panel wrapped up just a few minutes ago, and while there was surprisingly little in the way of Force Awakens reveals, they did announce the final results of this week’s Fan Poll, which allowed us to vote for a new character to join the 6″ Black Series.  Darth Revan from Knights of the Old Republic came in number one, so he will be getting a spot in an upcoming wave of Black Series figures… but not alone!

Sabine Wren, badass Mandalorian street artist from Rebels, came in such a close second in the Poll, that Hasbro confirmed she, too would be joining the Black Series!  This is obviously awesome news because A) Sabine is a great character, and (as previously established) Rebels is awesome… and B) Sabine’s inclusion, along with Ahsoka Tano (and Revan, depending on your play through of KOTOR), really ups the presence of strong female characters in this line, a welcome change especially when it comes to Star Wars.

So good news all around!  Check back shortly for updated photos from Hasbro’s Star Wars booth at Comic Con…