Safety Not Guaranteed Is The Best Kind Of Quirky 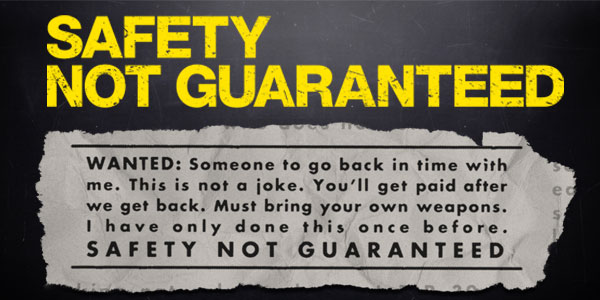 The best movie to hit theaters this weekend is the one you may not have heard of… Safety Not Guaranteed masterfully weaves comedy, sci-fi, and a delightfully offbeat romance into a smart, well-acted story that’s really something special.

Words like “quirky” and “offbeat” are often thrown at indie movies in an attempt to blanket-distinguish them from more mainstream films, but sometimes you find a movie that deserves those often overused descriptors. Safety Not Guaranteed is the perfect example of a movie worthy of such a description– as well as all the buzz it’s generating. Part oddball romantic comedy, part real-world sci-fi, with a healthy dose of great character portraits add up to an engaging and consistently entertaining left-of-center movie experience.

It all starts out with a classified listing– a solicit for a partner to time-travel, and magazine journalist Jeff (Jake Johnson) goes out on assignment to find more on the weird listing, taking with him interns Darius (Aubrey Plaza) and Arnau. But this road trip has a few curves right from the get-go… it turns out Jeff has no real interest in this story, and he’s simply using it as an opportunity to reconnect with his High School sweetheart in an attempt to relive his glory days.

Meanwhile, Darius takes charge on the story, meeting the strange man who posted the ad, Kenneth. After a few encounters where she gains his trust to go undercover as his potential time-traveling partner, the unexpected pair begin to form a unique friendship– a pair of weirdos who don’t fit in anywhere… except with each other. There’s more twists and turns to the story, but I won’t spoil them here. The beats go through many changes from small, personal moments to some interesting conspiracy mystery, as we are left guessing along with Darius how much of Kenneth’s paranoid reality is just in his head, and some cool, subtle effects work as the story slowly advances and blossoms into a note perfect ending that made me want to cheer out loud with a triumphant fist pumped in the air (a reaction shared by one enthusiastic character on screen as well).

More than anything, Safety Not Guaranteed is a wonderful little character study, as we slowly get to know these strange and often sad characters. Johnson is great as Jeff, with just the right mix of sleaze and sad-sack charm to bring the hapless reporter to life. Jeff is in his 30’s, but he’s apparently going through something of an early mid-life crisis, a man who’s never really figured out how to grow up and be an adult. As he connects with the girl who got away, you can see him start to figure out how to be a “grown up,” but the man child returns as soon as things stray even slightly off-course. Jeff’s crutch, and also window, into the youth he’s obsessively chasing is personified in Arnau, the timid virgin intern who Jeff takes under his wing and coerces into “becoming a man,” through incessant partying, picking up women and everything else the aging Jeff is missing from his younger days.

As Jeff veers off-course, we are left with Darius to actually follow through on the assignment. There is a sadness to Darius, underneath the note-perfect veil of sarcasm and cynicism Aubrey Plaza wields so expertly. Despite her beauty, Darius is clearly not a popular person, more comfortable when she’s alone and surrounded by walls she has constructed based on personal tragedy from her past. It’s this damage in her that is key to why she begins to connect with the incredibly strange– and possibly crazy– Kenneth. The creator of this time travel theory (which he claims he has done before), Kenneth is somewhere between a DIY scientist, a crazy survivalist and a rambling homeless guy (just, one who happens to have a home). I love the way the movie keeps you guessing regarding Kenneth, as neither Darius or us are sure whether his theories– and his paranoid belief he is being followed by shadowy agents– is legit, or total fantasy. Nothing is clear when it comes to Kenneth, whether it’s his motivations for his time-spanning voyage, how he created his machine, or anything else… except two things– while it’s easy to write Kenneth off as a buffoon, he’s not. The offbeat inventor is surprisingly capable in spite of his rough edges and lack of formal training, and many of his “delusions” may be far more real than anyone expected.

The second, much like Darius, Kenneth has a damage he carries with him, which motivates virtually everything he does. This break within both characters is what first makes them click, and serves as the basis of their burgeoning friendship. As the movie moves toward its ending, the story goes through some familiar beats, as Kenneth has to discover Darius was undercover writing her story on him, only to discover she has real feelings for him, but even these few predictable twists are well-handled and play out in a very natural way that made the movie continuously engaging as all the pieces come into place for the final scene when we finally see Kenneth’s much-discussed invention in action.

Safety Not Guaranteed is something special, a well-crafted, smart story packed with genuinely surprising twists and a real warmth to its broken characters. What could have easily swayed into Napoleon Dynamite spoof territory instead comes together into a charming tale about the path one needs to take to really grow up, and how you never know where you may find the right person to take that journey with you.