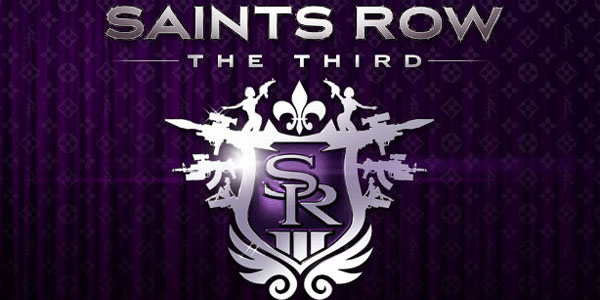 Modern video games have evolved into something of an art form; able to deliver complex and thought-provoking narratives with realistic characters and situations that you can truly invest yourself in, providing a cinematic experience to the player.  The Saint’s Row series, however, throws any semblance of balance and realism out the window in favor of what is frankly the most entertaining game of the year.

Saint’s Row: The Third, Volition’s follow up to their work on this year’s excellent Red Faction: Armageddon, follows the exploits of the series’ titular gang, the Third Street Saints.  Following the events of the previous iteration, the Saints are living large as media icons, complete with their own line of clothing, an energy drink, and a movie deal in the works.  When a powerful rival gang tries to stake a claim to the Saints’ empire, some rather hostile negotiations ensue and you find yourself displaced to the city of Steelport.  I could elaborate on this but, honestly, the story is a bit of an afterthought that the game itself doesn’t really invest itself in.  The important thing is that thousands of rival gang members need to die in the most hilarious ways possible.  Thankfully, you have an amazing repertoire of weaponry at your disposal to rip through your foes – everything from machine guns & rocket launchers to precision airstrikes & mind-controlling octopi.  There’s even a downloadable gun that shoots chum, prompting a huge shark to erupt out of the ground and devour your target. 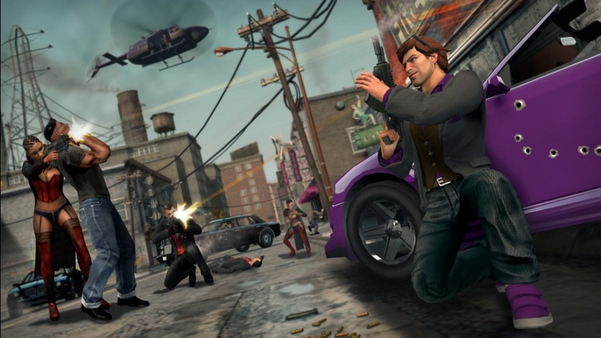 Being a “sandbox” game, you are able to roam the city freely, choosing your own path to mission objectives or the numerous activities scattered around the map.  While the sandbox genre has been done a hundred times over, Saints Row: The Third really impressed me with the amount of freedom and customization options that you are presented with.  When you start a new game, you are prompted to create a character from scratch and are given full control over their size, complexion, facial features, hair, etc.  We’re not just talking the standard skin tones either – want to create a character that looks like Silver Surfer complete with glossy metallic skin and soulless (and pupil-less) stare?  You totally can.  My custom character was a She-Hulk look-a-like.  If you play the game for any length of time and feel like changing anything from the location of a mole on your face to the gender of your character, it’s as easy as stopping at one of the city’s many plastic surgery offices for the option of a full visual rebuild.  The best part is that, with the great online support Saints has, you can upload your favorite character builds to the web for other players to download and share.  The customization options don’t stop there either.  Any vehicle you commandeer can be delivered to and become permanently part of your garage – able to be called upon whenever you please and tailored to your specifications.

All these tweaks cost in-game money of course but, thanks to the Saints’s brilliant design, players are rewarded with a steady cash flow just by playing the game.  If you have a few thousand dollars, you can opt to buy ammo or weapon upgrades, or think long-term and buy a storefront property to increase your earnings.  The more property you buy up in the city, the greater your hourly income will be.

Keeping track of and managing your cash flow, arsenal, garage, gang operations, and stats is a breeze thanks to the very well implemented cell phone that you can pull up at any time with the push of a button.  Your cell is your central information hub and allows you to access the city map, set GPS coordinates, accept missions, and call up other gang members for help in tough battles.  Too lazy to drive a few minutes to your crib’s helipad?  Just use your cell to order an attack chopper to be delivered to you. 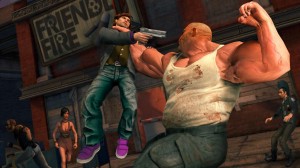 Although it is completely up to you when you decide to accept the main story missions, they are structured into a sequential order that guides you through the systematic destruction of the city’s other gangs.  Over the course of the story, you will find yourself blowing up an aircraft carrier, accidentally causing a zombie outbreak, battling naked though a brothel, and exploring a Tron-like cyber world.  Volition really kept the missions varied to avoid the repetitive rut that many sandbox titles can find themselves in.  Even the city’s activities are varied, whether you’re committing insurance fraud by heaving your body in front of a moving vehicle or taking part in a hyper-violent, Japanese-themed game show.

The audio in Saints Row: The Third is also a step up from many games’ offerings, featuring licensed tracks from Sleigh Bells, Deftones, Faith No More, Run-DMC, and dozens of other artists that you will hear on the radio of any vehicle you enter.  There’s even an Adult Swim station that plays selections from their popular shows – and there’s nothing like running down hapless people with a muscle car while the theme from Venture Bros is blaring.  You can also eliminate any songs you dislike from the mix entirely by making a custom station for the game to default to. 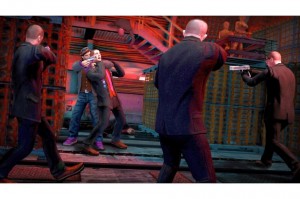 Graphically, the game looks fine but won’t impress anyone looking for eye candy.  There is a decent amount of pop-up as the draw distance is fairly short, especially visible when in a helicopter at high elevations.  More distracting are the frequent occurrences of screen tearing.  Enabling the v-sync option in the main menu is lessen (but not eliminate) the problem, but doing so will also cause the framerate to drop below 30fps when there is a lot of action on the screen.  These issues are minor, however, and didn’t detract from the game’s playability in any way.

Overall, I’ve sunk roughly 40 hours into the game to reach nearly 100% completion, so you certainly get plenty of play for your money.  You are also free to jump into a friend’s game or invite them to yours (even after you’ve completed all the missions) as the drop-in/drop-out multiplayer is very well-implemented.  Another party coming or going will not hinder your experience or subject you to long loading or connection screens – quite the opposite actually.  I found that anytime a friend jumped into my campaign, the game went from fun to a laugh-out-loud riot.  It’s crude, incredibly juvenile, and prides itself on absurdity and a complete lack of subtlety, but it will most certainly make you smile.