On Sale This Week: Dark Knights, Ghostbusters and Nightmares from DST! 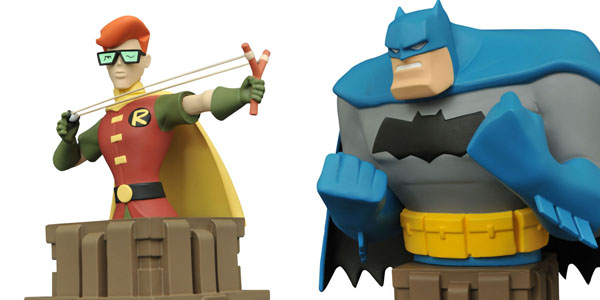 On Sale This Week: Dark Knights, Ghostbusters and Nightmares!

October is just around the corner, but this week is already a spooky one at your local comic shop! That’s because this week Diamond Select Toys ships out a bunch of scary (and scary good) products, including new action figures from The Nightmare Before Christmas, new Minimates of the new Ghostbusters, new busts based on the Dark Knight, and bottle openers from Predator and Harley Quinn! Click on each item for details, then reserve your set at your local comic shop!

A Diamond Select Toys release! In Gotham City, there are many stories about Batman, and in nearly every story there is a Robin. These resin busts of Batman and Robin are based on a child’s story about the dynamic duo, as seen in the Batman: The Animated Series episode “Legends of the Dark Knight.” Inspired by the classic comic book storyline, the episode showed a bigger, more brutal Batman and his new Robin, Carrie Kelly, taking on mutants in a dystopic future Gotham City. Dark Knight Batman measures over 6 inches tall, while Dark Knight Robin measures approximately 5 inches tall; both are in scale to other Batman: TAS busts, and each sits atop an art-deco pedestal inspired by Gotham City architecture. Each bust is limited to only 3,000 pieces, and comes packaged with a certificate of authenticity in a full-color box. 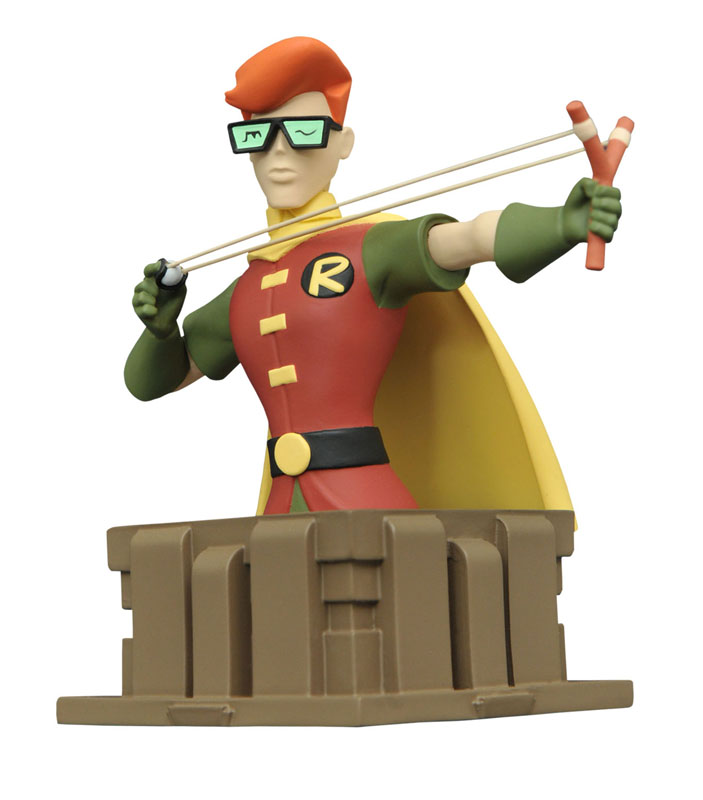 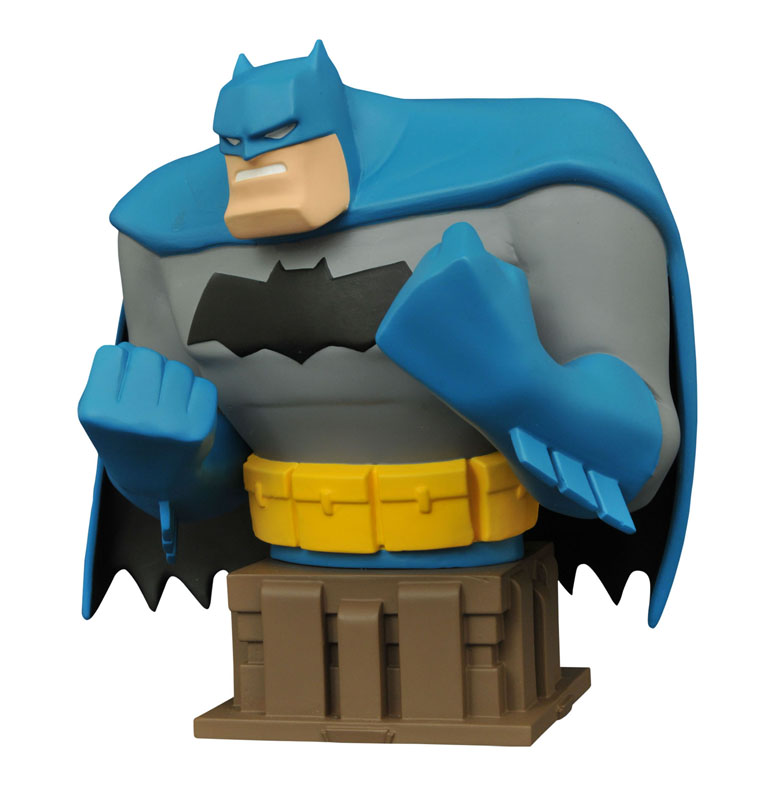 A Diamond Select Toys release! If she can bust the Joker out of Arkham Asylum, then she can open your bottle! Based on her appearance in Batman: The Animated Series, this sculpted metal bottle opener of Harley Quinn holding her oversized hammer can remove any bottle cap faster than you can say “puddin’”! A must-have for any Harley Quinn fan, or giant mallet enthusiast! Measuring approximately 5 inches long, it comes packaged in a full-color collector slipcase.  (Item #MAY162403, SRP: $18.00)

Lost In Space Anti-Matter B9 Robot With Lights & Sounds

A Diamond Select Toys release! Warning, warning! Diamond Select Toys has taken their 10-inch rendition of B9, the friendly helper robot from Lost in Space, and transported it to another dimension! This Anti-Matter version features an all-new paint scheme, as seen in the episode “The Anti-Matter Man,” and features lights and sounds taken straight from the classic sci-fi TV show. Lights on his head and chest blink constantly while B9 is on, and additional lights and all-new “anti-matter” dialogue are triggered with the push of a button, including “This is the opposite world,” “So you’re the goody-goody one,” and “I don’t need help from you, punk – get lost!” You can also manually raise and lower his head, open and close his claws, extend his arms and turn his torso to the left and right. He even has wheels so you can roll him around! Comes packaged in full-color window box with try-me feature. (Item #MAY162392, SRP: $49.99) 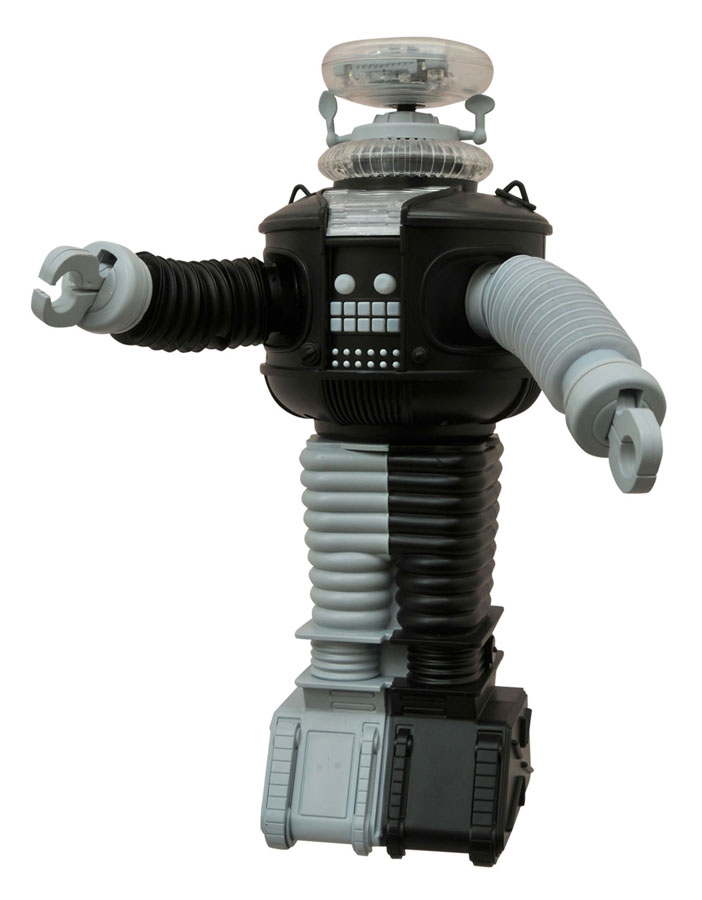 A Diamond Select Toys release! In 2004, DST released the original Giant-Sized X-Men box set, and it helped establish the Marvel Minimates line as one of the most comprehensive Marvel toy lines in existence. Now, 12 years later, DST is revisiting Giant-Sized X-Men #1 as a new series of two-packs, with new parts, updated characters and never-before-seen costumes! Two-packs include Wolverine with Thunderbird, Cyclops with Banshee (in his first-ever green costume), Colossus with Nightcrawler, and Storm with Sunfire (in his first-ever classic costume)! Each 2-inch Minimates mini-figure features 14 points of articulation, a display base and fully interchangeable parts, including alternate capes for Storm, and faces for Nightcrawler! Each two-pack is packaged in a full-color window box. (Item #APR162614, $9.99/ea.) 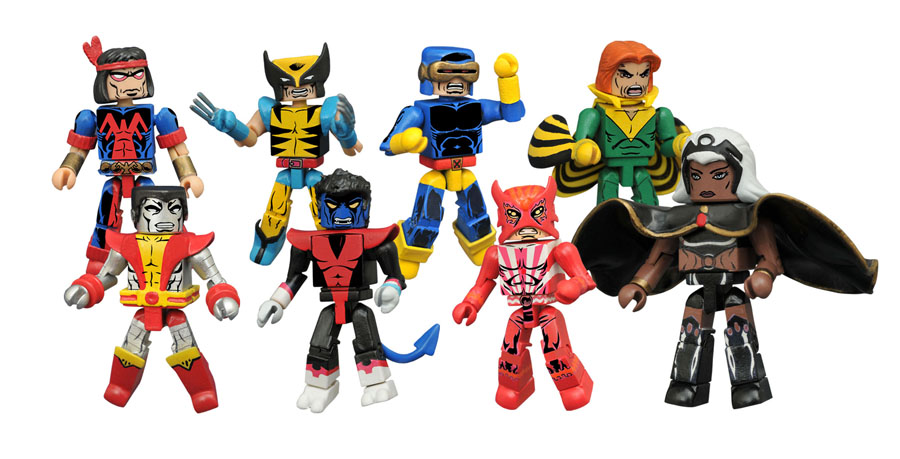 A Diamond Select Toys release! One of the hottest toy lines of 2015 returns for another series! Picking up where Series 1 left off, Series 2 of Nightmare Before Christmas Select action figures features Santa Jack, the Mayor and Dr. Finkelstein, each in an approximately 7-inch scale. Dr. Finkelstein includes a rolling wheelchair,   and Santa Jack comes with his sack of presents. Each figure also includes a piece of a courtyard diorama – collect all five pieces to build the courtyard and fountain! Each figure features multiple points of articulation, and comes packaged in display-ready Select packaging, with side panel artwork. Sculpted by Dave Cortes! 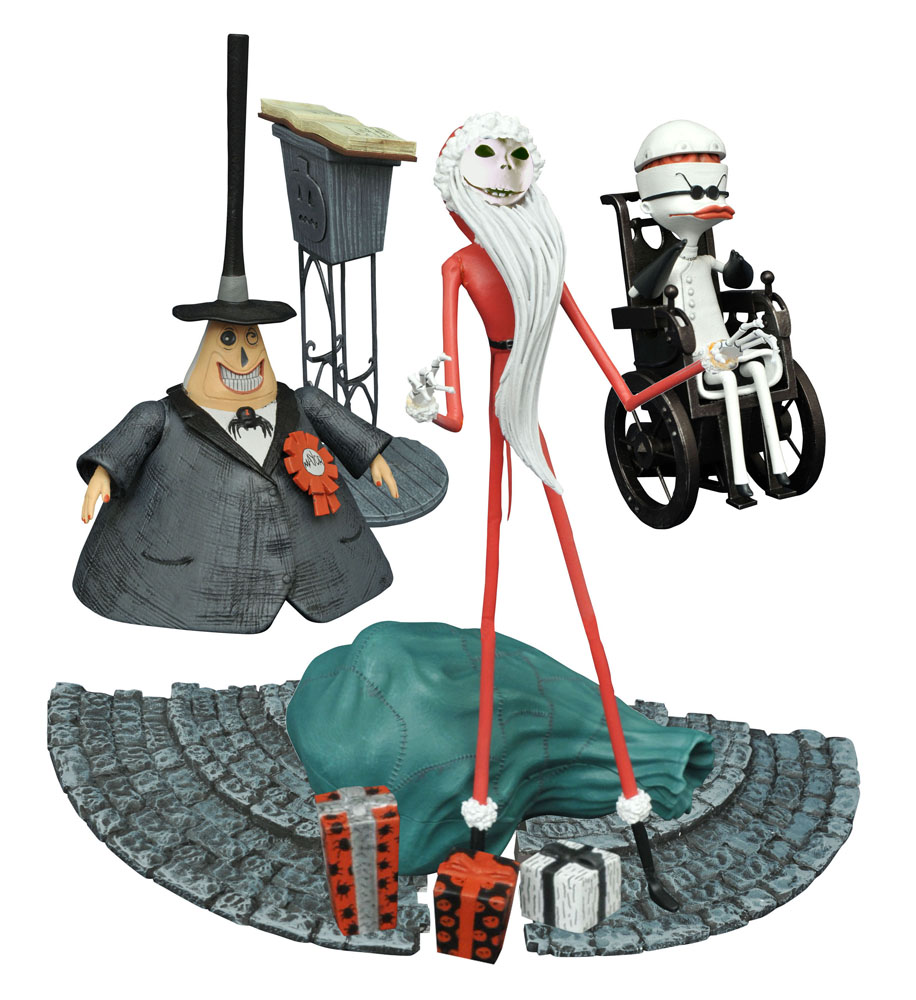 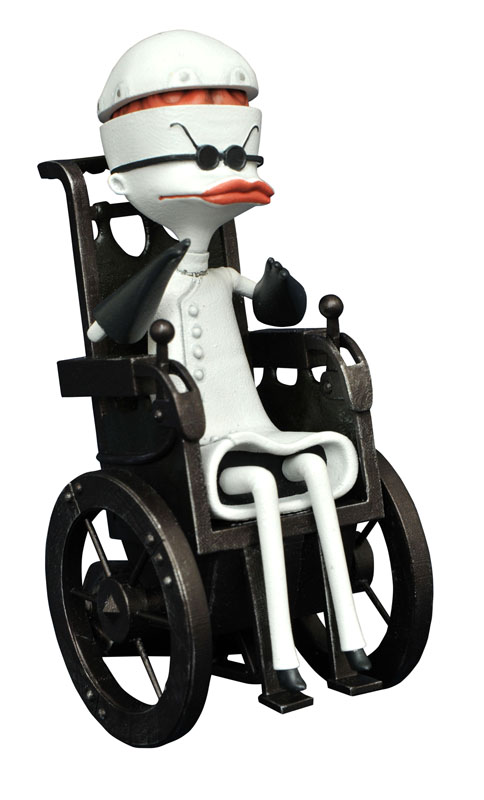 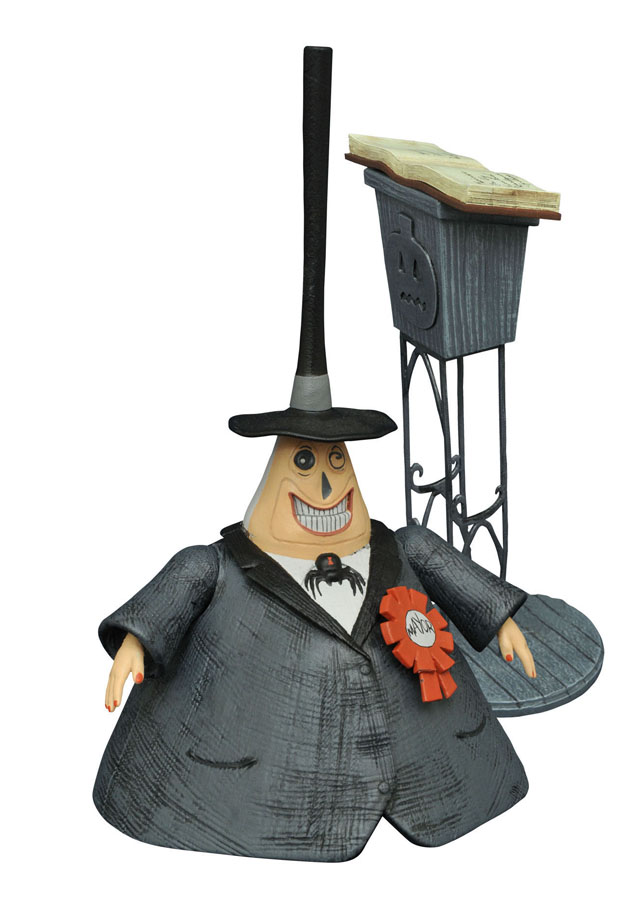 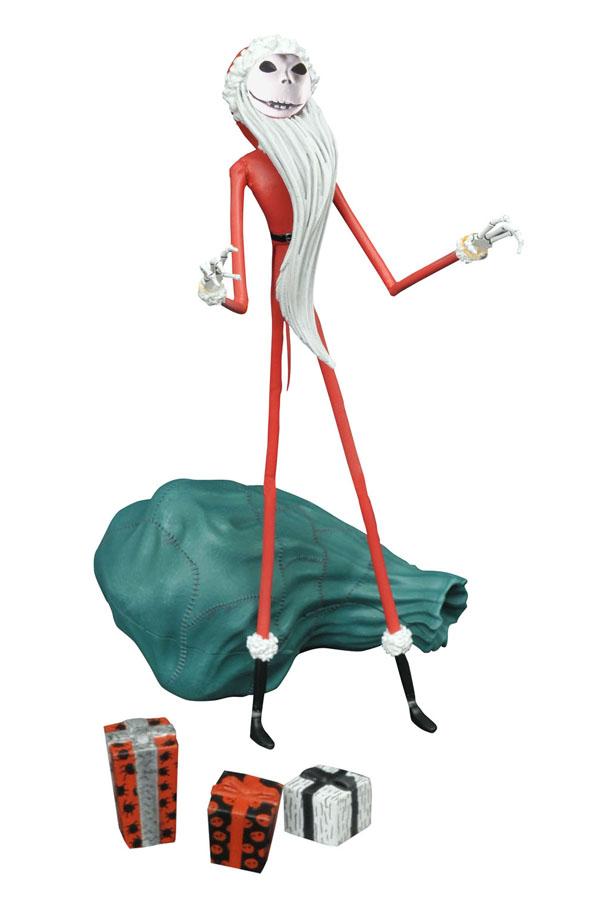 A Diamond Select Toys release! First seen in the sequel film Predator 2, the glaive weapon has become an iconic part of the Predator’s arsenal. Molded to a Predator’s grip and able to be thrown great distances, the glaive can cut through almost anything – and now it can open your bottles for you! This approximately 3-inch diameter bottle opener is modeled after the glaive as it appeared on screen, made of solid metal, and has magnets on the back so it can stick to your refrigerator or trophy case until you need it. Packaged in a collector case with a full-color sleeve. (Item #MAY162394, SRP: $18.00) 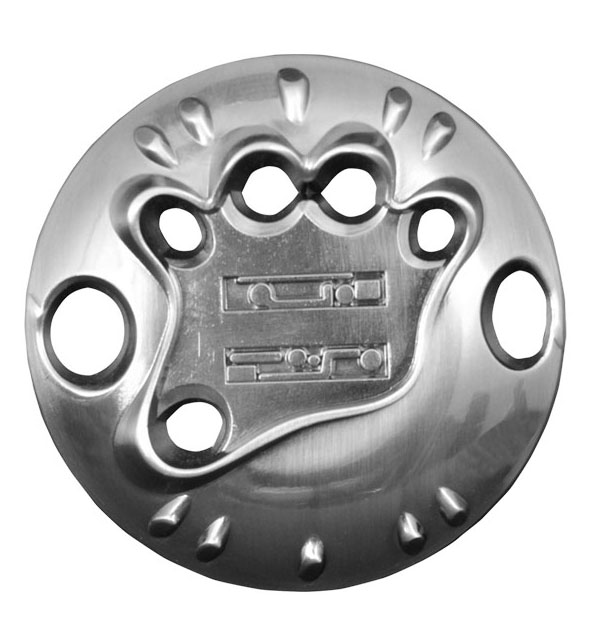